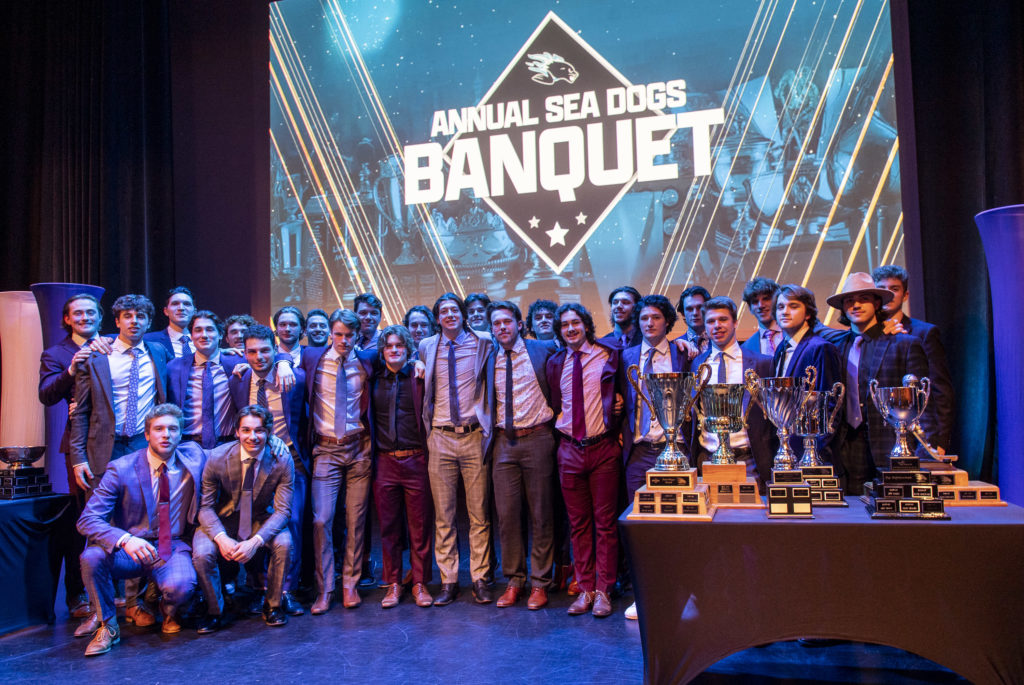 William Dufour took home the Pepsi Top Scorer Award, the Mike Thomas Players’ Choice MVP Award, voted on by his teammates, and the final award of the night, the Bell Aliant MVP Award. He also received a plaque to recognize his record breaking season, setting a new Sea Dogs record for most goals in a season, passing Danick Gauthier with 48 goals, and going on to now have 53 with three regular season games remaining.

Philippe Daoust, who joined the team at the trade deadline, was awarded the Alpine 3 Stars Award, which recognizes the player with the most three stars nominations in games played.

The Make-A-Wish Fan’s Choice Award, as chosen by you, the fans, was given to longtime Sea Dog Jérémie Poirier.

Fellow veteran Sea Dog and member of the 2018 QMJHL Draft class Josh Lawrence was named the Tim Hortons’ Most Improved Player for his impressive and record breaking season in the Port City. He also received a plaque for his record of most assists in a single season, passing Jonathan Huberdeau. He now sits at 65 assists on the season.

The Irving Oil Team Player Award, given to the player that shows composure and determination, while maintaining a high level of sportsmanship, was awarded to Riley Bezeau.

Saint John born Nick Blagden was awarded the TD Community Service Award for his commitment to ending the stigma surrounding mental health, through talks with local schools and teams.

For balancing schoolwork with a record breaking season on the ice, William Villeneuve was named the Saint John Airport Academic Player.

One of the relatively new awards at the banquet, the Deloitte Top Defensive Forward, given to players who demonstrated defensive prowess, playing tough minutes against top opponents, was awarded to Raivis Kristians Ansons.

Netminder Thomas Couture was named Rookie of the Year for his impressive 16 wins in 20 games, putting up a .922 save percentage in those appearances.

A full list of the winners and nominees can be found below, and the full ceremony can be watched on the Sea Dogs YouTube HERE.