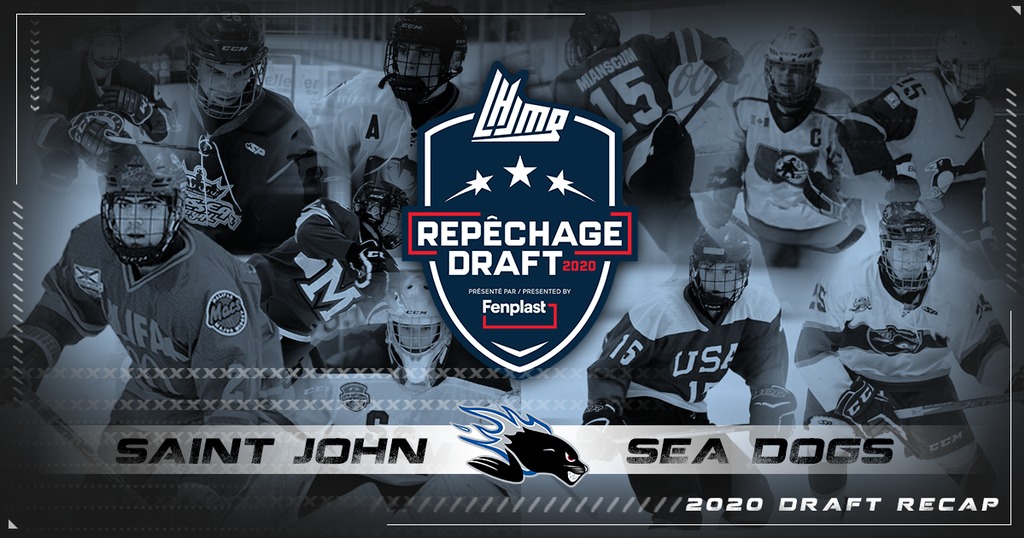 The Saint John Sea Dogs completed the 2020 QMJHL Entry Draft on Saturday, adding twelve new prospects to the organization in addition to a veteran goaltender and a collection of future draft picks by way of trades.

Each draft weekend is different,” said Sea Dogs President & General Manager, Trevor Georgie. “As we have seen the past few seasons, we can only truly evaluate it until a few seasons from now, as we’re seeing with the 2018 and 2019 drafts. We always enter this period trying to accomplish something and we were focused on three key things: adding size to our group, adding depth throughout the organization (players and picks), and take some low-risk/high-reward chances.”

With the third overall selection, the Sea Dogs acquired power forward Leighton Carruthers from Upper Tantallon, Nova Scotia. Carruthers played last season with the Halifax McDonald’s where he scored a team leading 18 goals in 35 games while adding 19 assists.  Carruthers exploded in the playoffs this year with 15 points in 10 games. Listed at 6’00” and 203 lbs, he was the tallest forward taken in the first round.

“It’s not everyday you can add a player with Leighton’s size, speed, and shot,” noted Georgie. “This addition makes us bigger, faster and harder to play against. He has a high ceiling and it’s up to us to help him reach his potential.”

What a moment for @leighton.carruthers! Just wait Leighton, it only gets better! #QDraft

“We got a very good feel for Nathan throughout our interview process and really like his character and his team first mentality,” said Stella. “He’s a strong two-way player with speed and confidence.”

😮 That moment when you hear the words you’ve been waiting for #QDraft Welcome to the family @nathan.drapeau

On Saturday the Sea Dogs selected 10 times and completed six trades, including the acquisition of veteran netminder Carmine-Anthony Pagliarulo from the Chicoutimi Saguenéens. In exchange, the Sea Dogs sent Chicoutimi a 7th round draft pick in 2022. The pick originally belonged to the Shawinigan Cataractes but Saint John was able to secure a trade on Saturday with the Cataractes to move back from the 88th overall pick to the 95th overall pick in exchange for the 2022 7th round pick.

“We wanted to add an experienced goalie at a reasonable price to share the responsibilities with Noah (Patenaude) next season,” explained Georgie. “Anthony has playoff experience as well, and we think that him and Noah can push and support each other throughout the year.”

“We have added a lot of quality forwards recently and wanted to open up more opportunities for our guys,” noted Georgie. “We also plan to pick in the import draft in a few weeks and unfortunately age plays a factor for Max, as this is his last season in the League. We wish Max the best of luck in Val D’Or.”

No official date has been set for the 2020 CHL Import Draft, which is typically held in late June.

Saint John selected their only goaltender of the draft in the third round, 6’3” Michael D’Orazio. From Beaconsfield, QC, D’Orazio played last season with Shattuck St. Mary’s posting a 1.54 GAA and .925 save percentage in 24 games played.

Davide Patella was the first player selected in the fourth round of the draft. A physical forward, Patella had seven goals, seven assists and 32 penalty minutes in 42 games with Laval-Montreal Rousseau Royal (QMAAA) in 2019-20.

The Sea Dogs then chose three straight left shot defencemen beginning with Guillaume Richard. Richard, a 17-year-old, was drafted 7th overall in the 2019 QMJHL Entry Draft by the Victoriaville Tigres, but did not report.

“We took a calculated risk on elite left-shot defenceman, Guillaume Richard,” said Georgie. “Guillaume who was drafted 7th overall last season but was put back in the Draft due to his commitment to the University of Maine. Although we have had success in recruiting players in similar situations, we know that every player is different and we will take our time getting to know Guillaume and his family to show them how they fit into our championship plans.”

With the 70th overall selection, Saint John drafted Duncan Ramsay from the Mount Academy Saints. The 6’2” native of Halifax finished last season with eight goals and 25 assists in 31 games.

It’s an honor to be drafted by such a great organization. Thanks to my friends, family and coaches who have helped me along the way. Proud to be Sea Dog. @SJSeaDogs https://t.co/XzYTVwkKFu

Although listed as a defenceman, Saint John drafted Di-D’Abram Mianscum as a forward from the Citadelles De Rouyn-Noranda (Espoir) in the 9th round. Listed at 6’0”, 201 lbs, Mianscum tallied 16 goals and 15 assists in 26 games this past season.

With the 190th overall pick, Saint John selected forward Nico Laforge. From Témiscaming, QC, just across the border from Ontario, Laforge played for the North Bay Trappers. In 2019-20 he scored 19 goals and added 16 assists in 29 games.

For their final two picks in the 2020 QMJHL Entry Draft, Saint John chose a pair of American forwards.

Shane Taddia from Medford, MA, played for the Thayer Academy Tigers in 2019-20, amassing 14 goals and nine assists in 33 games.

A full list of drafted players from the 2020 QMJHL Entry Draft can be found here on the QMJHL website.