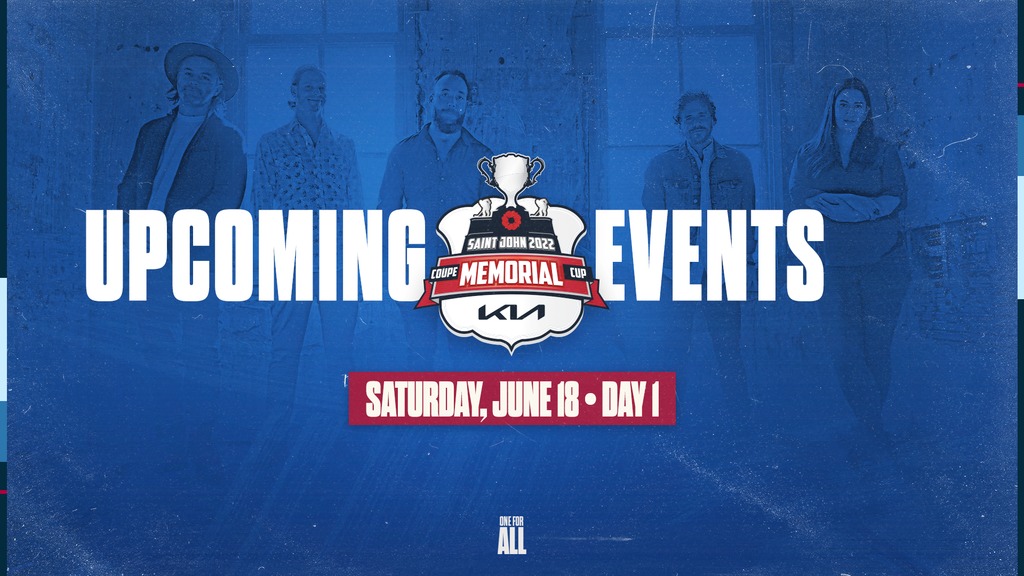 The Memorial Cup presented by Kia is here, Saint John! To help you prepare for the first day
of festivities, here’s a rundown of what’s taking place around the city.

Saint John’s biggest party on Saturday will be the Port City Party presented by Kia, which
will feature a live performance from multiple Juno Award winning rock band The Strumbellas
at the new AREA 506 Waterfront Container Village. Fans who purchase VIP tickets (there
are some still available at area506.ca) will also get to an amazing Maritime culinary
experience. General admission is free. Gates open at 7 p.m. for VIP ticket
holders and at 7:45 p.m. for the general public.

Saturday also includes the opening of the One for All District presented by McCain Foods in
the uptown core. Daily family friendly and free activities will be taking place throughout the
week celebrating elements of focus for this year’s Memorial Cup: diversity, equity and
inclusion.

The District kicks off Saturday with Youth Day, which is dedicated to celebrate the future of
the city, the youth, with a jam packed day of family friendly activities. Opening ceremonies
begin at noon. There will be a variety of events to choose from, including street games like
foosball, football toss, ping pong, basketball shoot, jumbo-sized chess and fun inflatables for
the small ones.

If you’re more the creative type, grab some chalk and help the District come to life with a
community chalk mosaic! All are welcome to add their own art and learn about the 10
emerging artists that were selected from the community to create a public installation that
will be displayed all summer long.

There will also be a hockey skill competition area for some street hockey fun along with
street yoga, which begins at 12:30 p.m. and goes on at the top of every hour until 3 p.m.
There will be music all day, including youth performances hosted by InterAction School of
the Performing Arts. You can also get down with some live music from Mike Biggar at 8 p.m.
and What the Funk at 9 p.m.

If you’re looking to check out some hockey before the games begin, Saturday marks the
opening of the new outdoor ball hockey surface, located next to the skatepark in the arena
parking lot. The surface will have an official opening Saturday at 11 a.m. and will be followed
by a weeklong Ball Hockey Tournament presented by JD Irving, which will feature teams of all
age groups and skill levels.

There’s no better way to end the day than with some fireworks! Enjoy Fireworks presented
by CIBC and Day &amp; Ross over the Saint John Harbour beginning at 11 p.m.

Events continue Sunday while tournament games begin Monday. A full list of daily events
can be found at chlmemoriacup.ca.