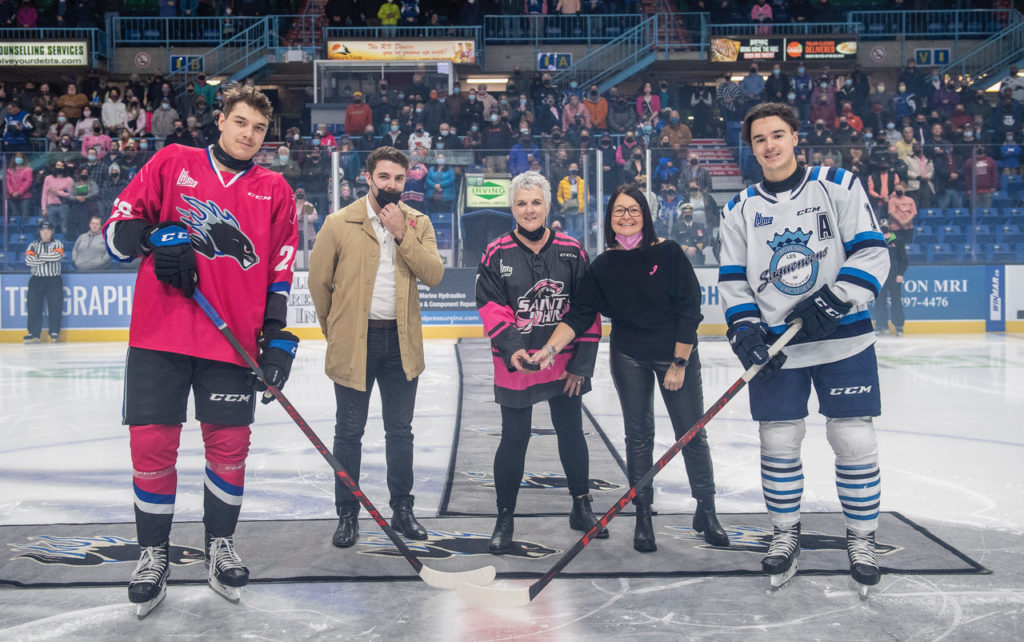 The Saint John Sea Dogs (8-7-0-2) fell 4-2 to the Chicoutimi Sagueneens (7-7-0-3) in their annual Pink in the Rink game at TD Station. The teams played a quick back and forth game and the Sea Dogs kept the pressure on until the end, sending 46 shots towards the Sagueneens net, but goals from William Dufour and Evgeny Sapelnikov were not enough to get the win in front of the home crowd.

Noah Patenaude got the start for the home team, making 15 saves on 17 shots in the 4-2 loss on Saturday. Sergei Litvinov started for the visitors making 44 saves on 46 shots.

Before the game the Sea Dogs had a very special ceremonial puck drop for Pink in the Rink. Breast cancer survivors Roxanne Ward, mother of former Sea Dog Kyle Ward, and Karine Côté, mother of current Sea Dog William Dufour were invited to centre ice and received a standing ovation from the TD Station crowd. 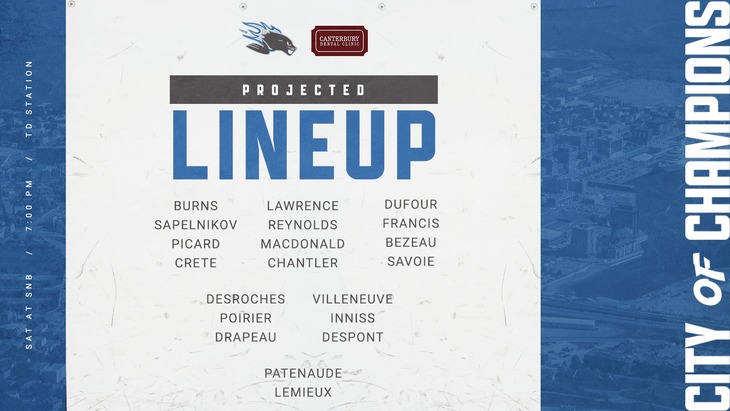 The first period passed by quickly, with very few whistles or stoppages. It was a back and forth period with chances at either end, but both netminders stood tall and kept the game scoreless.

With 59 seconds remaining, Olivier Picard was sent off for boarding. The Sea Dogs killed the first half of the penalty and went into the second frame down a man for 1:01.

The Sea Dogs led in shots 10-6 after the first period.

The penalty was killed but the Sagueneens struck first, 2:36 into the period, they took the 1-0 lead, a breakaway goal from Matej Kaslik.

They increased their lead to two with a goal from Thomas Belgarde at 8:03.

The Sea Dogs kept the pressure on but were unable to get any past Litvinov and Saint John went into the third period down 2-0.

William Dufour broke the shut out 2:48 into the third period. A scramble in front of the net gave the Sea Dogs the opportunity they needed to get past the netminder and onto the board.

The Sea Dogs got their first chance on the power play a minute and a half later when Matteo Mann was sent off for tripping. Evgeny Sapelnikov tied the game up on the power play, ripping a snipe of a shot past a screening defenceman and into the near top corner from the faceoff circle.

The Sea Dogs will be heading back to Quebec for another road trip this week, facing off against Gatineau, Val d’Or, and Rouyn-Noranda. The action starts in Gatineau on Wednesday the 17th, puck drops at 7 PM EST. Follow the game from home with CFBC 930 AM or online at watch.chl.ca