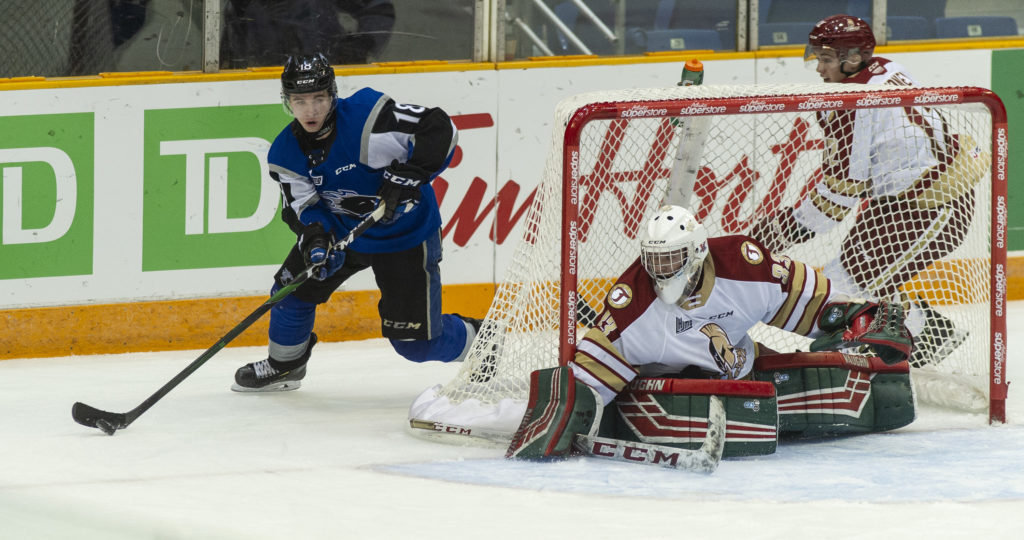 (FREDERICTON, NB) UNB’s Aitken Centre is about to become the ‘dog house,’ if only temporarily.

The Aitken Centre, home of the REDS resurgent women’s hockey program and eight-time national champion men’s program, will be the venue as the Sea Dogs face-off against regional rivals from Moncton, Bathurst and Charlottetown.

With renovations set to begin soon at Saint John’s TD Station, the Sea Dogs’ regular home, the team was looking for a temporary location for their exhibition schedule.

“We’re excited to help bring the Sea Dogs back to the home of our REDS,” said Dr. Wayne Albert, dean of UNB’s Faculty of Kinesiology. “Like a lot of venues, the Aitken Centre has been quiet for too long. Members of our administration, our Athletics department and our Kinesiology Facilities group have worked really hard to capitalize on this opportunity. A lot of work had already gone into the REDS’ scheduled return to play, and this will allow us to test-drive some of our new procedures while, at the same time, providing hockey fans here with a taste of something they don’t get to see on a regular basis.”

Saint John opens their pre-season schedule on Thursday, August 19th, against Moncton, with a second ‘home’ exhibition game against the Wildcats on Friday, September 10th.

The Sea Dogs will welcome the Charlottetown Islanders to the Aitken Centre on Wednesday, August 25th, and the Bathurst Titan on Saturday, September 18th.

“We are so pleased to bring these games to our great fans in the Fredericton region,” said Sea Dogs President and General Manager Trevor Georgie. “We’ve been fortunate to have players from Fredericton become captains and key contributors to our success over our history. Currently, we have two talented forwards from Fredericton, in Josh Lawrence and Peter Reynolds. There’s also a strong Sea Dogs connection to the REDS’ current roster, with Sam Dove-McFalls and Ben Gagne.”

This will mark the Sea Dogs first trip back to Fredericton since July of 2019, when Saint John took on Cape Breton in a single pre-season game, and is the latest joint venture between the Sea Dogs and REDS.

“Our partnership with the Sea Dogs has continued to grow over the years, and we’re happy to host them anytime we can,” said Nick Zildjan, the REDS marketing and special events manager. “They’re a very professional organization, and we’re always happy to work with them. This year, it helps us prepare for our REDS seasons as we can implement a lot of our new post-COVID logistics ahead of time.”

For the two games in August, there will be a reduced capacity at UNB’s Aitken Centre, with only about half the seats being made available. Tickets will only be sold in multiples of two and masks will be required inside the facility.

UNB will reassess the situation ahead of the games in September, following any update to public health regulations and guidelines.

Tickets will be sold for individual games. Four-game packages will also be available.

“Getting any large event off the ground is difficult, but as we emerge from a pandemic, it’s even more of a challenge,” said Zildjan. “Thankfully, UNB has a lot of great people working behind the scenes to make sure things happen safely. From the moment the Sea Dogs called, a determined team went to work to ensure we could not only host these games, but do it safely too.”

“We’re proud of our continued relationship with the University of New Brunswick and the REDS,” said Georgie. “We want to thank UNB’s administration, REDS Athletics and the Kinesiology Facilities group for working with us to accommodate our schedule. This is poised to be a historic season for not only our team, but all New Brunswick, and to launch the 2021-22 season in the province’s capital is a big moment for us.”

Tickets will be available online, through the REDS website, www.goredsgo.ca, and in person, at the Aitken Centre box office.