MENU
In response to the suspension of the season by the QMJHL, the Sea Dogs office will be closed until further notice. Please see the below announcement re: existing tickets and flex vouchers. Please hold on to any unused tickets. For questions/information please contact info@saintjohnseadogs.com We thank you for your patience and understanding as we continue to work through this.
November 27, 2019 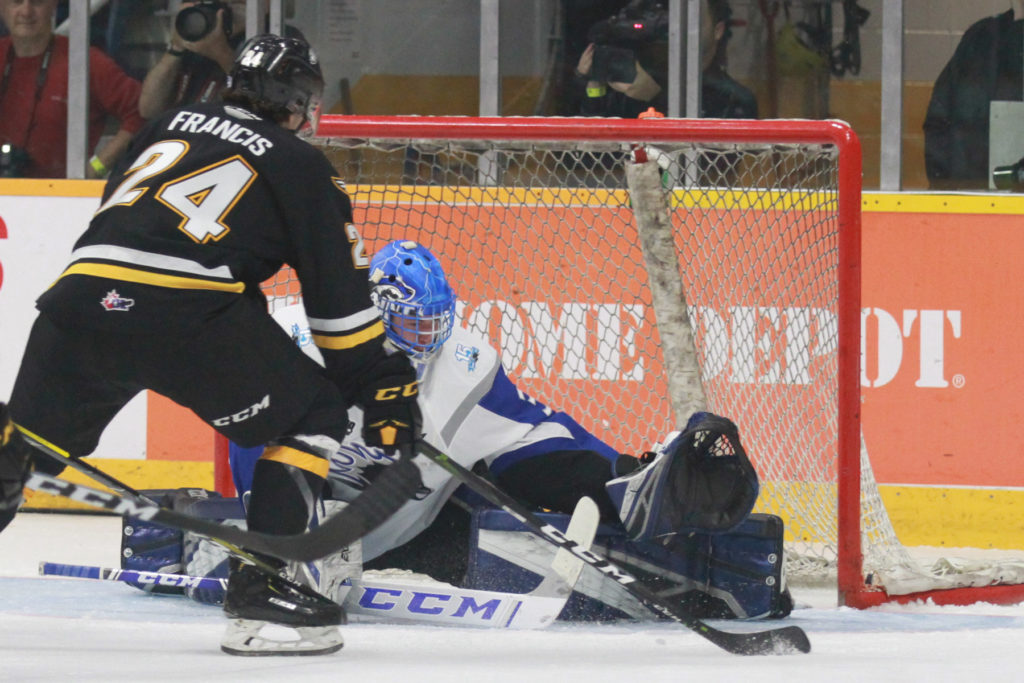 The Saint John Sea Dogs improved to 11-15-1-0 after a 4-3 shootout win over the Cape Breton Eagles (15-9-1-1) at Centre 200 on Wednesday night. Goaltender Zachary Bouthillier was sensational for the Sea Dogs stopping 48 shots in the win.  Saint John has now won three straight games and are 6-4-0-0 in their last 10 games.

Bouthillier made his second straight start for the Sea Dogs, coming off a 5-1 win over the Titan at TD Station on Sunday afternoon. The Eagles turned to rookie Ewan MacDonald who was making his QMJHL debut for Cape Breton.

Heavy Russian forward Egor Sokolov opened the scoring at 7:58 of the first after buzzing around the Sea Dogs’ net and snapping a hard shot past Bouthillier.

The Sea Dogs retaliated in a big way.

At 12:26 Nicolas Guay took a stretch pass from Jérémie Poirier and beat Ewan MacDoanld on the breakaway to tie the game at 1-1. Guay now has points in each of his last four games.

Four minutes later Deakin-Poot found Guay out front and Guay netted his 11th of the year to give Saint John the 2-1 lead.

The Eagles tried to shift momentum back in their favor as Shawn Boudrias dropped the gloves with Jordan Spadafore but the two players quickly grappled to the ice.

With just three seconds to go in the opening period, a scramble in front of the Eagles net left Josh Lawrence with the puck at the hash marks, he passed to Brady Burns who potted home his team leading 13th of the season to send the Sea Dogs to the dressing room with a 3-1 lead.

A sleepy second period saw both teams settling into the game.

At 13:59 Matt Gould was called for holding and the Eagles headed to the power play. It didn’t take long for Egor Sokolov to setup near the face-off dot and and rip a blast past Bouthillier to cut the Sea Dogs’ lead to one.

The Eagles pressed hard in the final minutes of the second but Bouthillier was acrobatic in the Saint John crease to send the Sea Dogs to the third period with a 3-2 lead.

Shots in the second were 17-4 Eagles.

Tempers flared in the third period and it seemed every whistle was followed by a scrum. Dawson Stairs and Liam Kidney got in each other’s face after a whistle behind the Eagles goal and both were sent off for roughing at 5:59.

After an Eagles rush made contact with Bouthillier, the Sea Dogs’ net minder was left out of position and Ryan Francis knocked in the tying goal. The play went upstairs for review but was confirmed a good goal.

Saint John then got into some penalty trouble.

The Sea Dogs killed off the penalty but quickly went back to the kill after James White was called for high sticking at 14:31. Bouthillier was solid down the stretch and the game was sent to overtime tied 3-3.

Bouthillier continued his stellar play in overtime stoning Egor Sokolov on the rush and ending an Eagles 2-on-1 with a clutch poke check.

Nicolas Guay looked to have a clear breakaway on a long stretch pass but the play was called for offside at the last second.

The game headed to a shootout.

Saint John opened the shootout and Brady Burns got the nod as first shooter but it was MacDonald coming up with the save.

Ryan Francis shot first for the Eagles and Bouthillier again came up with a timely poke check to keep it 0-0.

Cajkovic and Sokolov were each stopped by MacDonald and Bouthillier respectively in the second round.

Jérémie Poirier shot next for Saint John and wristed a low shot blocker side past MacDonald for the 1-0 Saint John lead.

Mathias Lafferriere then shot for the Eagles but Bouthillier came up huge with yet another poke check to seal the shootout win for the Sea Dogs, 4-3 the final.

Zachary Bouthillier finished with 48 saves not including a perfect 3 for 3 shootout.

Saint John returns home on Saturday night to host the Shawinigan Cataractes at TD Station for a 7PM start. Fans are urged to bring non-perishable food items to donate to Ritchie’s Food Drive  in support of Romero House. Tickets can be purchased at the TD Station Box Office or online.