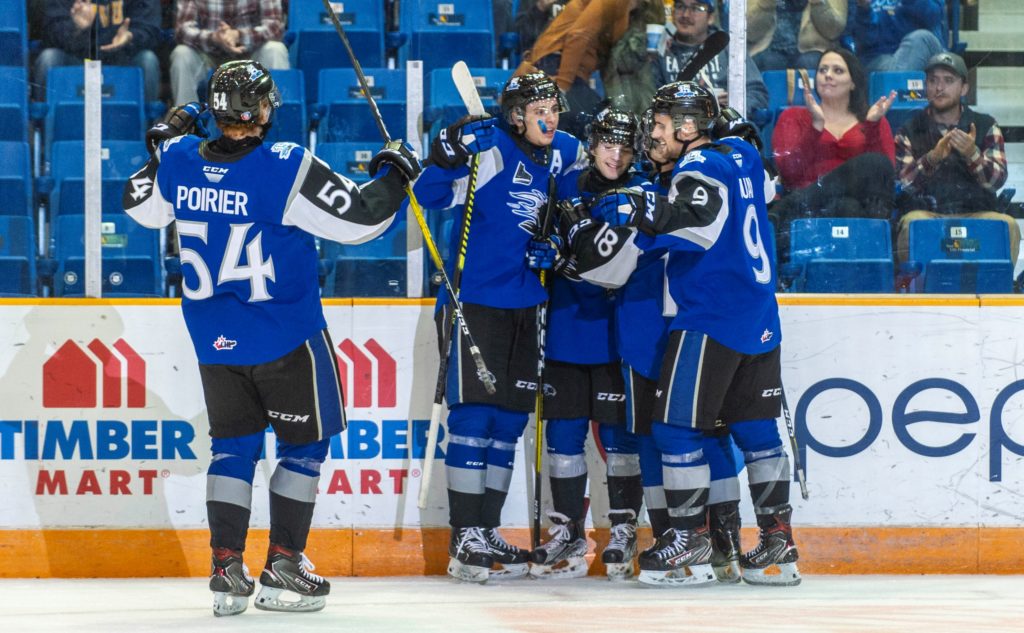 It was a battle of the Maritimes in Saint John on Saturday as the Halifax Mooseheads (7-6-1-0) came to town to take on the Saint John Sea Dogs (4-9-1-0) at TD Station.  The Sea Dogs emerged victorious in the 4-1 game, led by starting goaltender Zachary Bouthillier.

An early crosschecking penalty to Jason Horvath at 18:07 gave the Sea Dogs powerplay their first chance of the game, but they were unable to score against the Mooseheads top ranked penalty kill.

It was a battle of the goaltenders for the first period.  Bouthillier stood tall in net, turning away multiple high-quality shot attempts by Halifax’s high scoring top line.

The scoreless tie was broken with 17.1 seconds left in the first. Brady Burns scored his seventh goal of the season, deflecting a shot attempt by Josh Lawrence into the open side of the net.

Shots at the end of the first period were 10-9 for the Sea Dogs.

Another early penalty kicked off the second period, at 19:09 Halifax was called for too many men and the Sea Dogs power play got another chance.  It was cut short when the Sea Dogs were called for the same bench minor, sending the play to 4-on-4 for 43 seconds.

Jason Horvath was sent to the box a second time at 7:28 for tripping.

The boys started to get chippy as the period progressed. Maxim Trépanier and Matt Gould started shoving after the whistle in front of the Mooseheads’ net when Gould tried to jam in a loose puck.  Both players were sent off at 4:51 with matching roughing minors on the play.

There was a desperate flurry of action by the Mooseheads in the Sea Dogs zone in an attempt to score at the end of the period. The Sea Dogs skaters stepped up, blocking several shot attempts.

When the Sea Dogs broke out of their zone, they brought the play to the other end and Brady Burns scored his second of the game, a buzzer beater. He picked up a rebound by Ben Badalamenti and tucked it in, giving the Sea Dogs the 2-0 lead as the buzzer sounded.

The Mooseheads broke the shutout at 16:39 in the third.  Sonny Kabatay came in with speed and picked up a pass from Jeffrey Burridge in the slot and deked past Bouthillier.

The Moose applied more pressure as the period progressed, trying to tie the game up, but two quick goals by the Sea Dogs killed their momentum. Matt Gould scored the insurance goal at 3:58, firing a rocket past Cole McLaren and at 1:10 Dawson Stairs scored the final goal of the game, sending the puck through Cole McLaren’s five hole.

The Sea Dogs return to the ice to complete the back-to-back at TD Station on Sunday, October 27th for Military Appreciation Day at 3pm against the Victoriaville Tigres.  Tickets are available at the TD Station box office and online.