MENU
In response to the suspension of the season by the QMJHL, the Sea Dogs office will be closed until further notice. Please see the below announcement re: existing tickets and flex vouchers. Please hold on to any unused tickets. For questions/information please contact info@saintjohnseadogs.com We thank you for your patience and understanding as we continue to work through this.
October 17, 2019

BURNS THE HERO IN SHOOTOUT WIN OVER TITAN 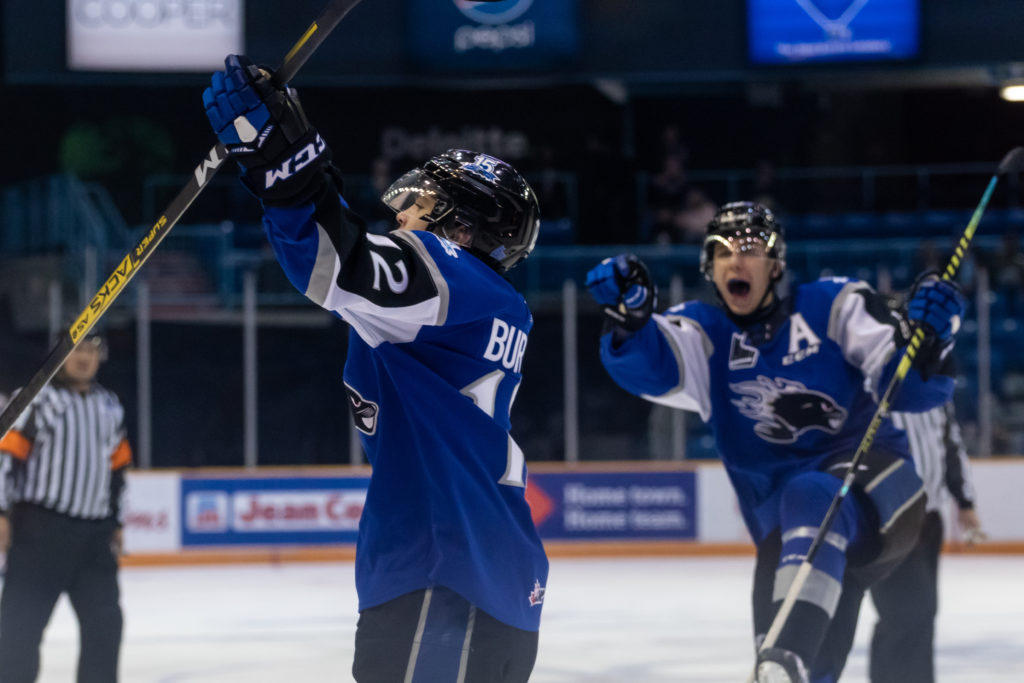 BATHURST, NB – Brady Burns was the hero for Saint John on Thursday night in a 2-1 shootout win over the Acadie-Bathurst Titan. Saint John improves to 4-7-0-0 while the Titan fall to 0-6-1-3.

Zachary Bouthillier got the start in net for the Sea Dogs while Tristan Berube manned the Titan goal.

A scoreless first period saw the Titan take a 9-8 shot lead to the dressing room.

The two teams traded power play goals in the second period. Cole Larkin went off for hooking at 9:33 and the Sea Dogs didn’t take long to capitalize. Ben Badalamenti fed the puck to Brady Burns in the slot who had been left all alone. Burns wristed home his sixth of the year, glove side on Berube to give the Sea Dogs the 1-0 lead. Burns is now in the top ten league wide for power play goals with three.

The Sea Dogs’ power play continues to find success and maintains a 27.7% success rate, the fourth best in the QMJHL.

With under three minutes to go in the period the Titan responded with a power play goal from Shawn Element to tie the game. The ever physical Element played a tough game but was matched up with Nicholas Deakin-Poot throughout most of the night who kept him in check.

In the dying seconds of the second period Jérémie Poirier took a knee-on-knee hit in the Titan zone and was slow to get up as the buzzer sounded. He returned to start the third period.

Saint John out shot the Titan 14-6 in the second period for a 22-15 shot lead heading into the third.

A string of power plays from both sides proved unsuccessful in the third period. Saint John had a power play opportunity with 30 seconds to go in the period but didn’t have much time to setup. The game headed to overtime tied 1-1.

Saint John carried the man advantage into overtime and play started 4-on-3. The Titan killed off the penalty but the game remained 4-on-4 for sometime until the next whistle. With under two minutes to go the Titan had multiple chances in close but Bouthillier make several huge stops to keep the game tied. After the Titan hit the post, the goal horn briefly sounded but the referee behind the net immediately waved off the goal. The Sea Dogs recovered the puck and crossed center in a two-on-one only to have the play blown dead to review the puck off the post. The review revealed no goal and the game headed to a shootout.

The Titan opened the shootout with a Cole Huckins goal. Saint John countered with their own 16-year-old, Joshua Roy, who couldn’t convert. After a Shawn Element miss Jérémie Poirier had the puck on a string as he dangled in close and roofed the puck on Berube to tie it 1-1. After a pair of Titan misses it came down to Brady Burns who brought home the win with a backhand deke. Sea Dogs win 2-1.

Saint John heads to Charlottetown for the first of a home and home with the Islanders on Friday night at 7:30pm. Catch the Sea Dogs at home on Saturday night for our annual Pink in the Rink game at 7PM. Get your tickets at the box office or online by clicking here.