MENU
In response to the suspension of the season by the QMJHL, the Sea Dogs office will be closed until further notice. Please see the below announcement re: existing tickets and flex vouchers. Please hold on to any unused tickets. For questions/information please contact info@saintjohnseadogs.com We thank you for your patience and understanding as we continue to work through this.
February 16, 2020 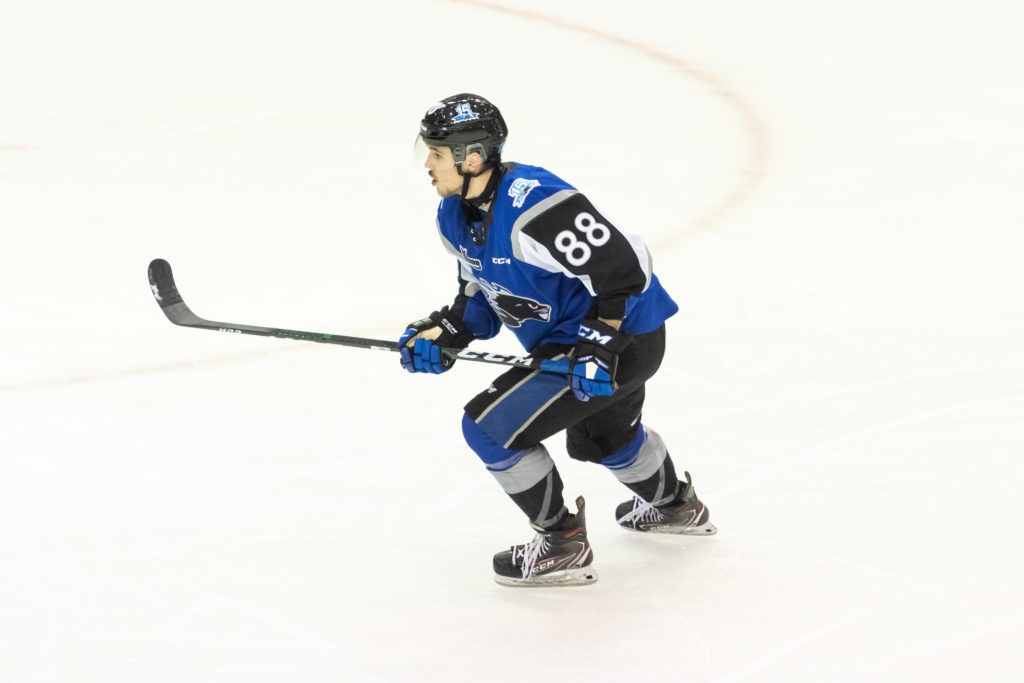 Zachary Bouthillier started in net for Saint John. The Mooseheads turned to Cole McLaren with starter Alexis Gravel out after suffering in injury in Friday night’s game against the Titan.

A slow start for both sides ramped up after Keegan Hunt went to the box for high sticking at 12:42 and the Sea Dogs took to the power play. Maxim Cajkovic scored his 15th of the year when he let a low shot go from the far circle to give the Sea Dogs a 1-0 lead.

Jérémie Poirier scored his league leading 18th goal by a defenceman at 17:46 on a slick one timer feed from fellow defenceman William Villeneuve, putting the Sea Dogs up 2-0. Villeneuve now leads all QMJHL defenceman in points with 51.

The second started with an offensive explosion for the Sea Dogs. Maxim Cajkovic scored his second power play marker of the game just 28 seconds in. Just over a minute later Josh Lawrence crossed the blue line and picked the top corner with a wrister to make it 4-1 Saint John. Cole McLaren was replaced in the Mooseheads goal by rookie Alex MacVicar who was made his QMJHL debut.

Things weren’t much easier for MacVicar as the Sea Dogs continued to find the back of the net. The Sea Dogs went to the man advantage after Olivier Desroches tripped Brady Burns as he pushed towards the Halifax goal. Following the trip Jordan Spadafore shared his feelings on the play with his former teammate Desroches, and the two went off for roughing. Seconds after the penalty expired William Villeneuve let a blast go from the point for his ninth of the year to make it 5-1 Saint John.

Halifax answered back with a goal from Kevin Gursoy at 7:51, but the Sea Dogs extended their lead once again less than two minutes later when Joshua Roy knocked a bouncing puck out of the air and into the net, the 10th goal of his rookie season. 6-2 Saint John.

The Moosheads would get another, this time on the power play after Villeneuve went off for tripping. D’Artagnan Joly ripped a shot from the top of the circle to make it 6-3 Sea Dogs.

The two teams combined for seven goals in the third period. Halifax opened the scoring when Gavin Hart scored two minutes into the period. Saint John responded when Maxim Cajkovic completed his hat trick at 4:23, an unassisted goal. The celebration was short lived as Halifax scored 18 seconds later, this time from Marcel Barinka. 21 seconds later Jeffrey Durocher retaliated for Saint John with his 19th of the season to put the Sea Dogs back up by three, 8-5.

A costly turnover in front of Bouthillier was picked up by Gavin Hart who scored his second of the game at 9:09.  While the pace of the game continued at full throttle, the scoring subsided until late. With the Mooseheads’ net empty, Kevin Gursoy rifled a cross crease one timer passed Bouthillier to bring the Moosheads within one. With the clock ticking down Dawson Stairs sealed the win  for Saint John with an empty net goal, the final score, 9-7.

William Villeneuve had an assist on Stairs’ goal giving him 42 on the season, a new franchise record for assists in a single season by a defenceman.

Saint John will have a quick turnaround before hosting the Acadie-Bathurst Titan at 3PM on Monday in a special Family Day Game. Tickets are available online or at the TD Station Box Office.