MENU
In response to the suspension of the season by the QMJHL, the Sea Dogs office will be closed until further notice. Please see the below announcement re: existing tickets and flex vouchers. Please hold on to any unused tickets. For questions/information please contact info@saintjohnseadogs.com We thank you for your patience and understanding as we continue to work through this.
December 1, 2019 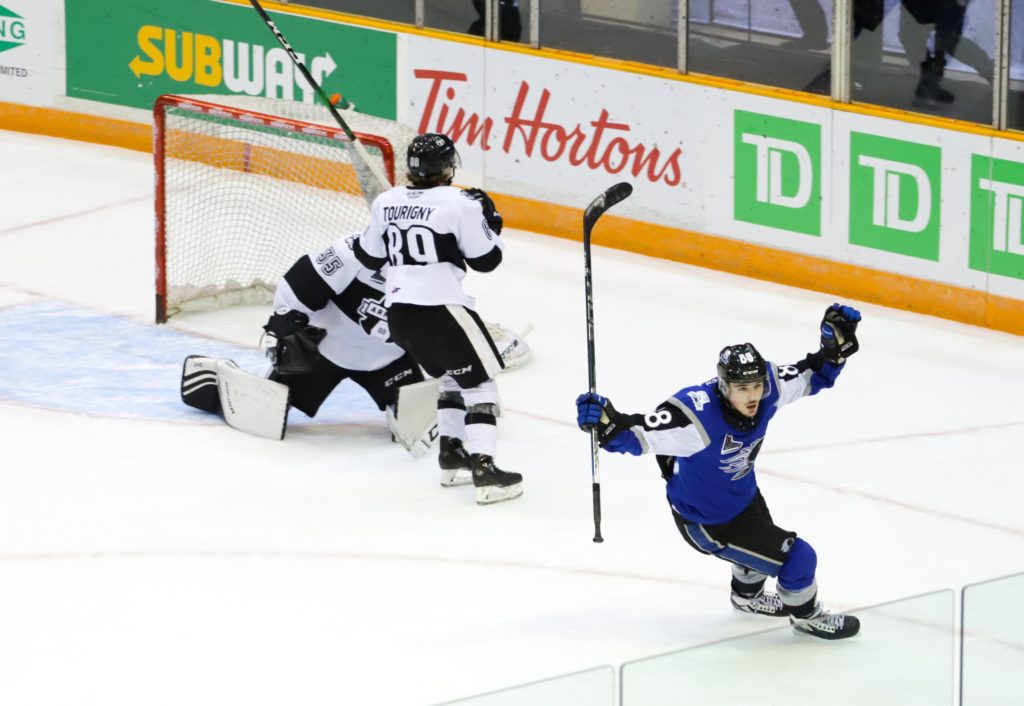 It was a goalie battle in Saint John as the Saint John Sea Dogs (11-16-1-0) took to the ice against the Blainville-Boisbriand Armada (13-12-1-1) at TD Station.  Both goalies were outstanding in the overtime thriller.

Noah Patenaude got the start in net, stopping 38 of the 39 shots he faced in the 2-1 win on Sunday afternoon.

Dawson Stairs did not skate in the game due to an injury.

In a first period filled with opportunities on both sides of the ice, the Armada were the team that broke the scoreless tie. Simon Pinard went up the wing and shot one past Noah Patenaude from the faceoff circle at 12:22.

A penalty to Jordan Spadafore for checking to the head sent the Sea Dogs power play onto the ice for the first time of the game with 1:39 remaining in the period.

Shots at the end of the first period were 16-9 for the Armada.

Nicholas Deakin-Poot was sent to the box for interference at 3:39. A Blainville-Boisbriand bench minor for too many men served by Yaroslav Likhachev at 5:24 sent the play to 4-on-4 for 15 seconds.

Brady Burns tied the game on the power play at 6:21. Standing in the crease behind the goalie, Burns deflected a shot by Maxim Cajkovic, scoring his fourth goal in as many games and tying his points total from last season. From then on, the Sea Dogs offense started buzzing.

A hooking penalty to Miguël Tourigny at 11:43 gave the Dogs power play another opportunity.

At 18:46, Adam Capannelli received an unsportsmanlike conduct penalty, giving the Sea Dogs a power play that carried into the third period.

Shots at the end of the second period were 26-25 for the Armada.

The Sea Dogs started the third period with a two-man advantage for 46 seconds after a Nathan Lavoie was sent to the box for roughing after the final whistle in the second period.

Maxim Cajkovic thought he gave Saint John their first lead of the game, deflecting a shot by Brady Burns through the legs of the Armada’s goaltender 53 seconds into the period, but the goal was waved off after a review.

The Sea Dogs power play came out again after a hooking penalty to Adam Capannelli at 2:46.

Saint John kept the pressure on, creating offensive opportunities and keeping the play in the Armada zone.

Nicholas Deakin-Poot and Nathan Lavoie got into a shoving match by the Armada net after Deakin-Poot attempted to push the puck past Olivier Adam.  They were both given two minutes for roughing at 9:56.

Three periods were not enough, as neither team could get past the opposing goaltender and the game was sent to overtime.

Shots after regulation were 41-39 for Saint John.

It didn’t take any time at all before the Sea Dogs sealed the deal and won the game. Maxim Cajkovic scored the game winner 53 seconds into the overtime period.

The Sea Dogs play next on the road where they will face off against the Gatineau Olympiques on Wednesday December 4th.  Follow the game from home at sjseadogs.com/live.