CAJKOVIC THE TEDDY BEAR HERO IN 5-1 WIN OVER TITAN 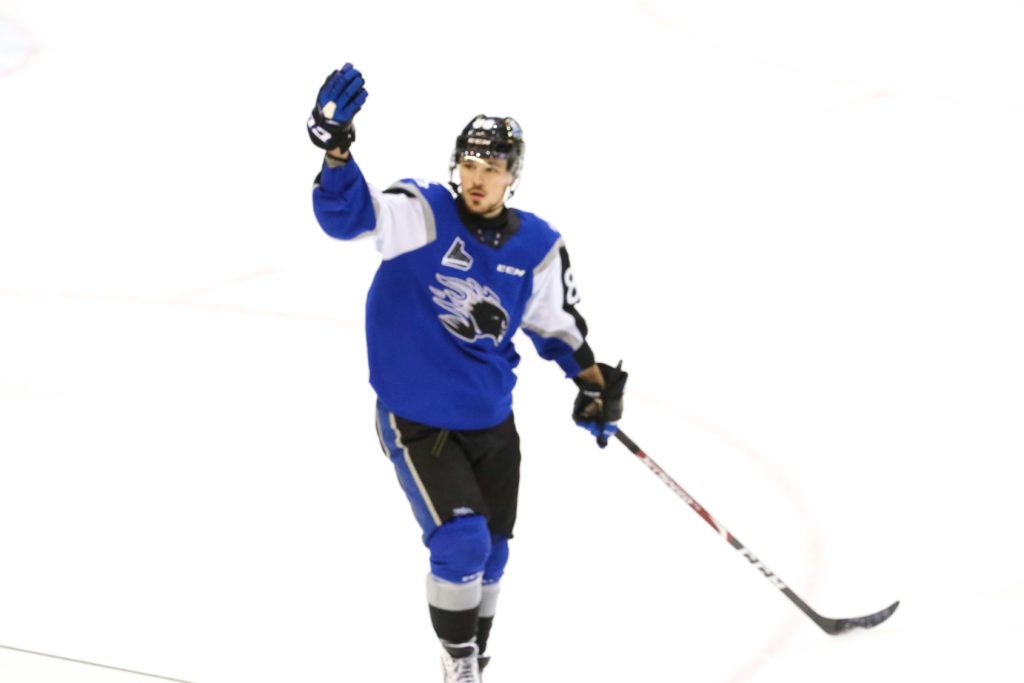 For the second time in two nights, the Saint John Sea Dogs (9-15-1-0) faced off against the Acadie-Bathurst Titan (3-14-3-3).  After a 4-3 win in Bathurst on Saturday, the Sea Dogs returned to TD Station for the annual Teddy Bear Toss game.  The Sea Dogs won 5-1 with two goals from Maxim Cajkovic and a 34 save performance from Zachary Bouthillier.

The Sea Dogs were all offense the first period, every player eager to get the first goal in the annual Teddy Bear Toss.

The Dogs went to the power play at 7:34 after Rémy Anglehart was sent to the box for high sticking against Maxim Cajkovic.  Cajkovic scored on the resulting power play and sent the teddy bears flying, firing a wrister from the faceoff dot.

Brady Burns made it 2-0, coming in with speed, beating the defender, and lifting the puck over Félix-Anthony Ethier at 14:19.

The Titan got their first power play at 15:47 when Julian Vander Voet was sent off for high sticking.  The Sea Dogs killed the penalty.

Matt Gould increased the lead to three after Félix-Anthony Ethier fell behind the net. Nicholas Deakin-Poot took the puck from the Titan netminder and sent it to the front of the net where Jordan Spadafore collected it and Gould tapped it into the open net at 18:45.

Maxim Cajkovic scored his second of the game sending a one timer from Nicolas Guay to the back of the Titan net with 11 seconds remaining in the period.

Shots at the end of the first were 15-9 for Saint John.

Tristan Bérubé replaced Félix-Anthony Ethier in the Titan net to start the period.

Logan Chisholm scored the Titan’s first goal of the game, coming up the wing with speed and sent the puck top shelf 1:22 into the second.

Tensions rose in the second meeting between these two teams in as many nights and Matt Gould was assessed the first penalty in a period full of them for holding at 8:25.

Maxim Cajkovic and Cole Huckins were sent off at 10:22 with offsetting unsportsmanlike conduct penalties.

Shots after the second period were 33-23 for Saint John.

The animosity continued to build in the third period. A scrum broke out after a hit in the Acadie-Bathurst zone, and Jordan Spadafore, Shawn Element, and Nicolas Kingsbury-Fournier were sent to the box for roughing, sending the Sea Dogs to the power play at 4:20.

Players on both sides started to lay bigger and bigger hits as the period progressed.

Penalties to Joona Lehmus for slashing and Julian Vander Voet for interference at 7:34 sent the Titan to a two-man advantage for two minutes. Zachary Bouthillier stood tall in the Sea Dogs net and Saint John killed the penalties.

Rémy Anglehart went to the box for tripping at 14:23 and Dawson Stairs scored on the resulting power play receiving a pass from William Villeneuve in the slot and scoring the Sea Dogs fifth and final goal of the game.

Maxim Cajkovic extended his point streak to eight games and has 15 points in that stretch.
Full Stats

The Sea Dogs will take on the Cape Breton Eagles on the road on Wednesday, November 27th.  Listen live at sjseadogs.com/live.