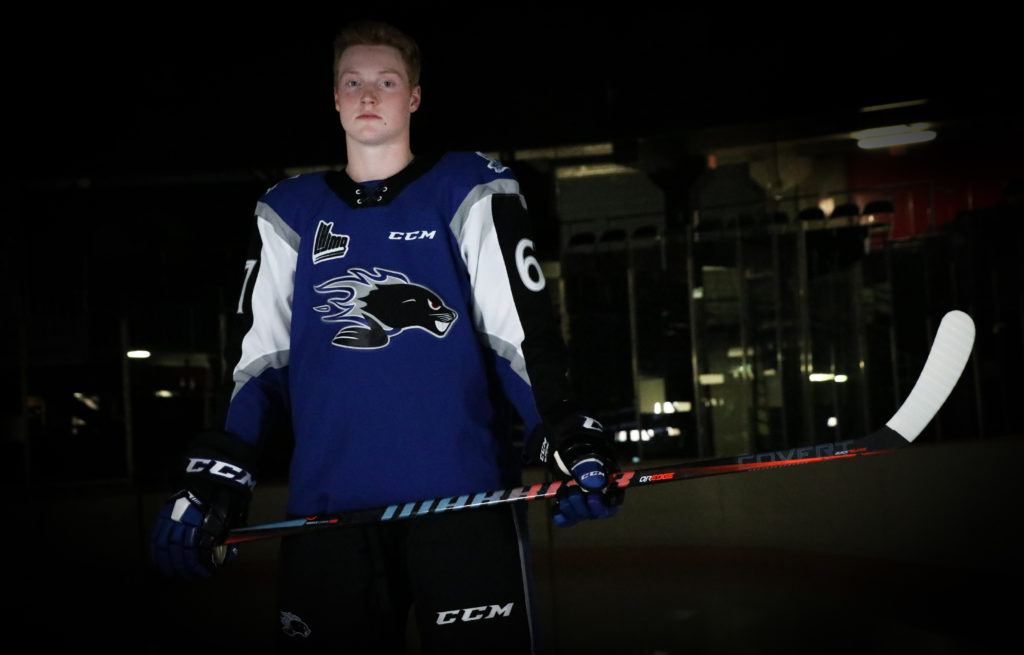 Sea Dogs fans caught a glimpse last season of what Dawson Stairs is capable of. Stairs was an affiliate player in the 2018-19 season, suiting up for 11 games with the Sea Dogs. This year, looking towards his first full QMJHL season and the NHL draft in June, fans in the Port City should get used to hearing his name.

The 17-year-old rookie has notched five points in his first five games this season, including a two-goal game against the Cape Breton Eagles, but his scoring touch comes as no surprise. Last year when he was not with the Sea Dogs he split his time between the South Kent Selects Academy in Connecticut, where he scored 45 points in 30 games, and the Campbellton Tigers of the Maritime Junior Hockey League, scoring 28 points in his 24 regular season games and averaging 0.80 points per game in the playoffs.

“Playing in Campbellton was great,” Stairs says about his time in the MHL. “We had a great group of guys there and I found we just really bonded well together, and it helped my performance on the ice.”

Playing at the Junior level as a 16-year-old was invaluable experience for the young forward, giving him a taste of what to expect and helping him develop as a player. His 11 games with Saint John last season helped him prepare even more.

“Getting that experience of what this league is like was huge. This year I’m just taking what I got out of it last year and trying to improve on that,” he said. “It’s more skilled here, and the players are smarter, so they know what they’re doing, and you got to try to just make the easier plays and not try to do anything too fancy when you’re out there on the ice.”

Selected in the 7th round by Saint John in 2018, Stairs was a surprise signing last year. Originally intending to take the NCAA route, he decided to commit to play in Saint John after attending the Sea Dogs camp.

“Just being around the rink, in that atmosphere you know. I felt like this was the place I want to be in. Seeing the guys out there on the ice I knew it was a good group of guys and I would have lots of fun here.”

For the Fredericton native, one of the perks of playing in Saint John is being close to friends and family. After playing at Rothesay Netherwood School in the 2017-18 season, he is no stranger to the area, and with family close by, he’s able to play in front of his loved ones often.

“It’s great, it’s only an hour away so all my family is able to get up for all the games. And it’s just a cool experience to be able to play here in Saint John. I’ve been here with RNS for a year, so I know a lot of people here, they always come support the game so it’s just a great feeling.”

Between training camp and the first few games of the season, Stairs is already gelling with his teammates.

“Pretty much any guy I play with, I find we have good chemistry just because of the group of guys we have in the room we just all bond well together. So, it doesn’t really matter who you’re with. You kind of just have that connection right away.”

The connections are growing, the momentum is building, and, as one of ten draft eligible players on the Sea Dogs this year, so is the hype. But Stairs and his teammates aren’t focused on that right now.

“You know with all the guys we have in our draft you know there is going to be scouts in the stands every game so we are just going to try to go out there and do our best and try to get noticed.”

His plan for the rest of the season?

“Just trying to play my best. Go out there and try to get noticed by all the things I do out on the ice.” He continued, “I just take it one game at a time, I don’t really focus too much on the hype. I just go out there and play my game. It’s great to have great linemates with me because they are able to help me perform well.”