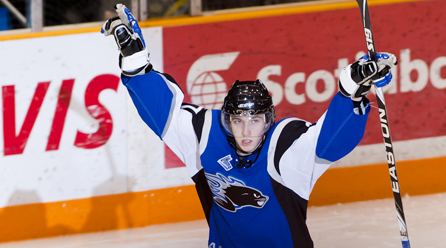 RIMOUSKI, Que. – The Saint John Sea Dogs left no doubt as they completed their defence of the President’s Cup championship with an 8-0 win over the Rimouski Oceanic Thursday.

Stanislav Galiev had a hat trick and added two assists as the Sea Dogs became the first repeat Quebec Major Junior Hockey League champions since the Gatineau/Hull Olympiques in 2003 and 2004. Mathieu Corbeil, who played every minute of the Sea Dogs playoff run, made 24 saves for his first shutout and 16th win of the post-season.

Tomas Jurco added two goals and two assists, while Zack Phillips, Jonathan Huberdeau and Danick Gauthier had a goal and a helper each. Nathan Beaulieu and Ian Saab both chipped in two assists.

Charlie Coyle had a rare quiet night with one assist, but received the Guy Lafleur Trophy as most valuable player of the QMJHL playoffs. Coyle and Galiev finished tied for the league scoring lead with 34 points each, a team record. Galiev had 16 goals, tying the mark Huberdeau set last year.

The Sea Dogs, who lost just one playoff game, completed their third sweep of the playoffs and became just the seventh team to win back-to-back titles. As QMJHL champions, the Dogs qualify for the MasterCard Memorial Cup, where they will attempt to defend their national championship in the four-team tournament, which runs May 18-27 in Shawinigan, Que.

Jacob Chouinard, who started and finished the game in goal for the Oceanic, allowed five goals on 26 shots in the loss while Carl Hozjan stoppd six of nine shots in a relief stint.

The Sea Dogs put their stamp on this game early and rang up a 5-0 lead before the first period was out. Jurco opened the scoring at 4:14 with a shot from the slot on a setup from Galiev, who passed out front while falling down along the end boards.

Phillips made it 2-0 at 11:39 when Beaulieu cut across the blueline and flipped a pass across the zone toward the net that Phillips redirected home for his ninth.

Just 50 seconds later Gauthier beat Chouinard with a backhand shot from inside the left-wing faceoff dot. Huberdeau and Kevin Gagne assisted on the goal, Gauthier’s 13th, which triggered the first of two goaltending changes for Rimouski.

Hozjan, however, fared no better, allowing goals by Jurco and Galiev 19 seconds apart late in the opening frame. Jurco flipped a puck in front of the net from the left-wing corner then knocked the bouncing puck in from the slot with his backhand at 18:55. Beaulieu and Galiev assisted on the goal, Jurco’s 13th. Galiev then jammed in Jurco’s rebound to make it 5-0 at 19:14, with the other assist going to Phillips.

The onslaught continued 3:49 into the second period when Galiev struck again. Jurco and Ian Saab had the assists this time, and the Oceanic switched goaltenders once again.

Chouinard’s return between the pipes seemed to somewhat stabilize the Oceanic, and they escaped the second period without further damage.

Galiev completed the natural hat trick at 4:44 of the third, with assists from Jurco and Saab. Huberdeau rounded out the summary with his 10th of the playoffs at 7:47, assisted by Coyle and Gauthier. 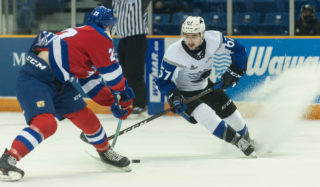 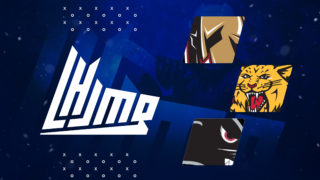 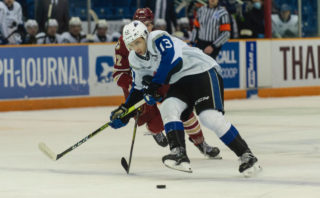 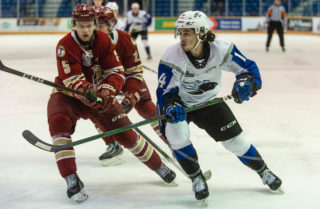 Schedule update for the Maritimes Division
2 days ago 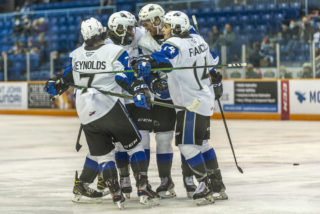