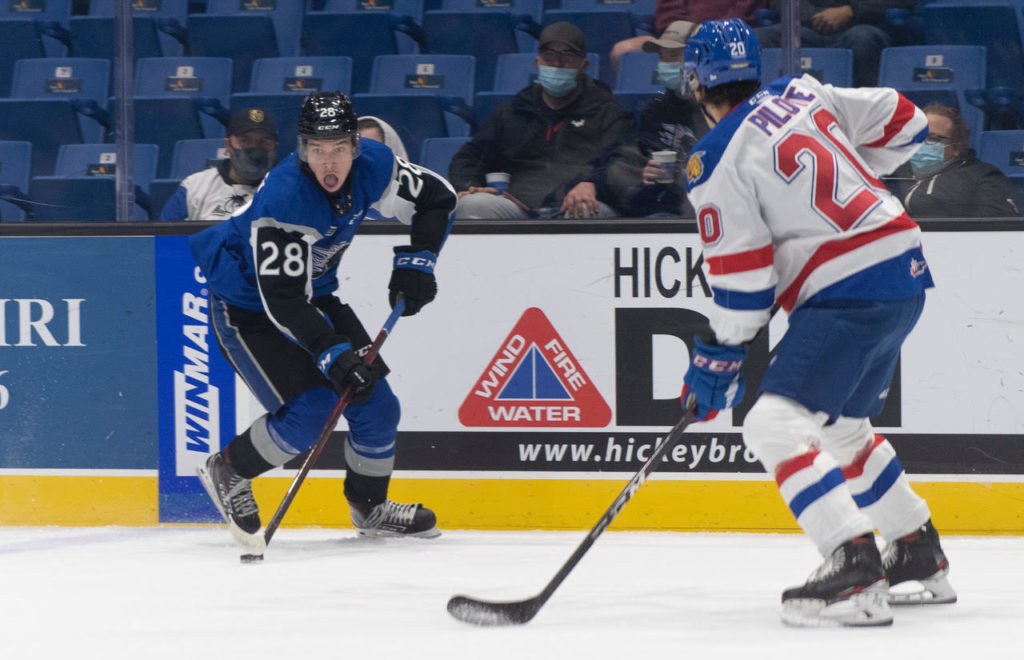 The Saint John Sea Dogs (3-4-0-2) fell to the Moncton Wildcats (4-3-0-0), facing their New Brunswick rivals for the first time this season on Saturday October 23rd. William Dufour scored two, Olivier Picard scored his first as a Sea Dog, and Josh Lawrence got his 100th point in the QMJHL in the loss at TD Station.

Jonathan Lemieux got the start in net for Saint John making 32 saves on 36 shots. Rookie netminder Thomas Couture got the start for Moncton stopping 42 of the Sea Dogs 45 shots in the 4-3 win. 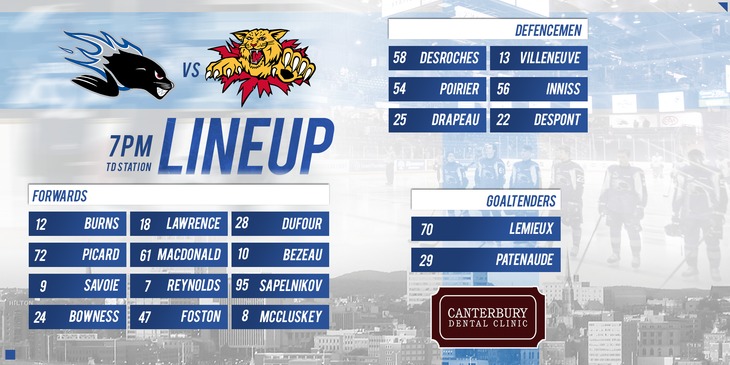 The Sea Dogs got an early power play when Charles-Antoine Pilote was sent to the box for cross-checking at 3:43. Play went to 4-on-4 with 54 seconds remaining, when Charles Savoie received a four minute double minor for high sticking.

Midway through the period, William Dufour had a great attempt off a pass from Brady Burns. The play went to a review to see if the Sea Dogs had taken the lead, but it was declared no goal.

Two minutes after the review the Sea Dogs did take the lead off a goal from Olivier Picard, his first as a Sea Dog. Standing in front of the net and banging the puck past the Wildcats goaltender.

Shots after the first were 14-13 for Saint John.

With 8:28 remaining in the second period, the Wildcats made it onto the board. Francis Langlois sent a shot past Lemieux from the faceoff circle after winning the faceoff and tied the game at one.

The Sea Dogs got their second power play of the night late in the second, Yoan Loshing was sent off for slashing. Saint John kept the pressure on in the Wildcats zone, generating chances. Mathis Cloutier was sent to the box on a hooking call and Dufour went off for diving on the same play. Play was 4-on-3 in the Sea Dogs’ favour for 29 seconds, before going to 4-on-4.

Shots after the second were 27-26 for Saint John.

Moncton took the lead 1:24 into the third period, Maxim Barbashev picked up the rebound off a sharp angle shot for the Wildcats second goal of the night.

Shortly after, there was some shoving behind the Wildcats net, and Charles Savoie and Samuel Desgroseilliers were sent off, making play 4-on-4 for two minutes off matching roughing penalties.

Nathan Drapeau was sent off for delay of game and the Sea Dogs penalty kill came out again at 5:54. On the Wildcats’ resulting power play, they increased their lead when a puck bounced off a player in front of the Sea Dogs net and past Lemieux.

The Sea Dogs got within one with 8:23 remaining, Josh Lawrence broke into the zone with speed, passed the puck to Brady Burns, who tried to get a shot off, and William Dufour was there to pick up the puck and fire it past the netminder, making it 3-2. Josh Lawrence’s assist on this play was his 100th point in the QMJHL.

Moncton scored their fourth goal of the night Miles Mueller was awarded the goal at 16:36.

Wildcats’ Jacob Stewart was sent off for boarding and the Sea Dogs got a late power play attempt. Saint John pulled Lemieux to play 6-on-4 and kept play in Moncton’s zone. Moncton received a second penalty, Francesco Iasenza was sent off for cross-checking and play went to 6-on-3. The Sea Dogs scored their third goal of the night, a rocket from William Dufour, his second of the night, at 18:41.

Saint John maintained pressure, but were unable to tie it up in the end, falling 4-3.

The Sea Dogs will be hitting the road to take on the Acadie-Bathurst Titan tomorrow, October 24th in a Sunday matinee. The puck drops at 3 PM, tune in with Sea Dogs Radio Presented By TD on CFBC 930 AM.