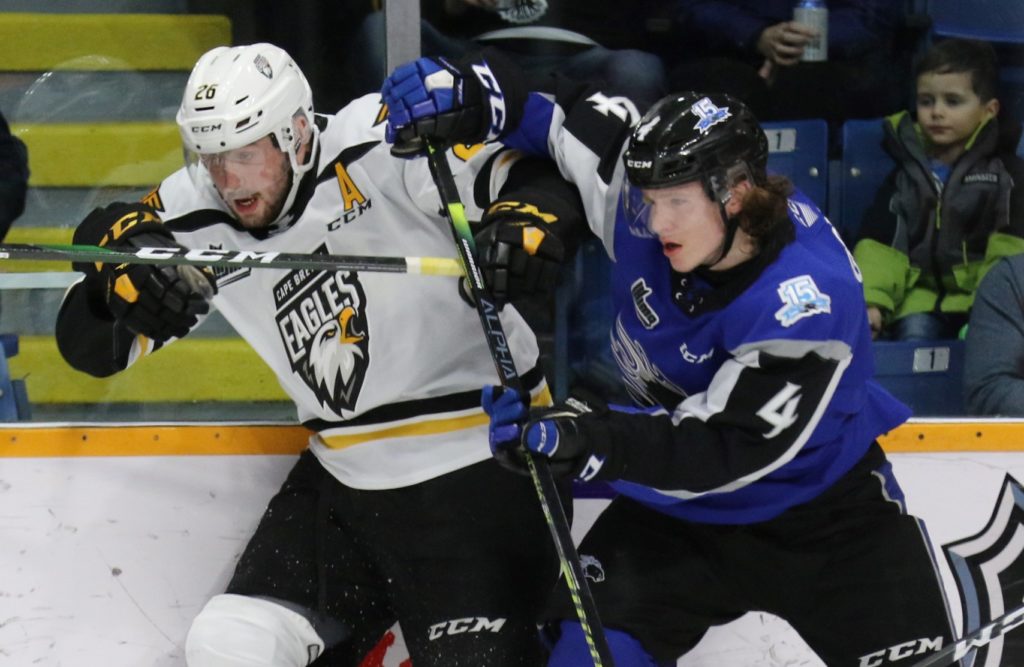 The Saint John Sea Dogs (20-21-1-0) were handed a tough loss by the Cape Breton Eagles (24-13-2-1) for the second game in a row, on Friday night in Sydney. The new look Eagles started slow but exploded in the second half with eight goals for a final score of 8-2.

Saint John announced the signing of free agent Anderson MacDonald just prior to the start of the game. MacDonald debuted for the Sea Dogs tonight, donning number 34. The Sea Dogs were without regular forward Ben Badalamenti who continues to be sidelined with a lower body injury.

Zachary Bouthillier was named the starter for the fourth game in the row. The Eagles looked to steady regular, Kevin Mandolese.

Saint John opened the scoring four minutes in when Nicholas Deakin-Poot tipped a William Villeneuve shot for his 13th of the year. Villeneuve is now second on the team in points with 36, and second overall in the QMJHL among defencemen.

Egor Sokolov was buzzing around the Sea Dogs’ zone looking to continue the dominance he established in Wednesday night’s win, but he and the Eagles were held scoreless in the first. Cape Breton led shots in the through the period 14-11.

Sokolov opened the scoring for the Eagles at 5:18 to tie the game and unfortunately this sparked a long night for the Sea Dogs.

Shawn Boudrias scored his first of three on the night at 10:59 on a feed from Gentile.

Newly signed Sea Dog Anderson MacDonald found himself alone in front of Mandolese with a great opportunity but the puck bounced from his stick. The Eagles took advantage and rushed the other way where it was Gentile connecting with Boudrias yet again to make it 3-1 Eagles. Gentile finished the night with five assists.

Julian Vander Voet came streaking down the right side and ripped a high shot past Mandolese at 14:51 for his second of the season to cut the lead to 3-2 with five minutes to go in the second period, but that’s as close as the Sea Dogs would get.

Bouthillier finished with 40 saves in the loss, while Mandolese took the win with 29 stops.

Saint John returns home Sunday afternoon at 3pm to take on the Baie-Comeau Drakkar for their first meeting of the year. The two teams are currently tied in the Eastern Conference, each with 41 points. The Drakkar will play tomorrow night in Moncton in the second game of a three-in-three through the Maritimes that kicked off tonight with a 5-1 win over the Acadie-Bathurst Titan. Tickets are available at the Box Office or online by clicking here.