For the second night in a row, a Sea Dog netted a hat-trick against the Moncton Wildcats in pre-season action. 2021 second-round draft pick Vince Elie was the hero on Friday night, scoring his second, third, and fourth goals of the pre-season in a 7-2 win.

The Sea Dogs iced a similar lineup to Thursday night’s 6-3 win, with veteran defenceman Brandon Casey joining the lineup as the only change. 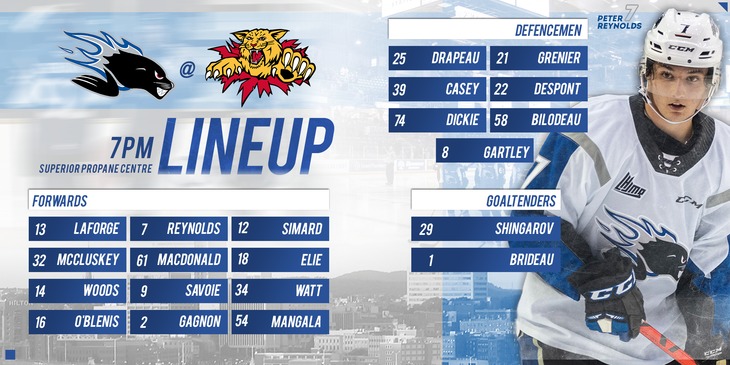 Elie opened the scoring just 1:11 into the game kicking off a six-goal period between the teams.

Cam MacDonald scored his first of the pre-season at 5:18 followed by Brandon Casey making it a 3-0 Sea Dogs lead at 7:52.

Luke McPhee and Alex Mercier replied for the Wildcats while Jack O’Blenis scored his first of the pre-season at 17:52. From Salisbury, NB, O’Blenis was drafted to the Sea Dogs in the seventh round of the 2021 QMJHL Enret Draft.

Saint John added three more goals in the second period, Peter Reynolds scored his second of the pre-season at 0:41 of the frame before Elie completed the hat-trick with back-to-back goals at 8:36 and 14:23.

Both teams were held scoreless in the third period. Olivier Brideau replaced Ventsislav Shingarov in goal halfway through the second and was perfect in his second appearance of the pre-season stopping 21 of 21.

Saint John will have an open to the public scrimmage on Sunday from 9:15am – 11:30am at the Quispamsis qplex before returning to pre-season action on Tuesday, August 24th in Cornwall, PE when they take on the Islanders. New Brunswick based fans can catch the Sea Dogs and Islanders on Wednesday, August 25th at the Aitken Centre in Fredericton. Tickets are available at the Aitken Centre Box Office or online at https://unbtickets.universitytickets.com/