FIRST PERIOD LEAD SLIPS AWAY IN 4-3 LOSS TO CATARACTES 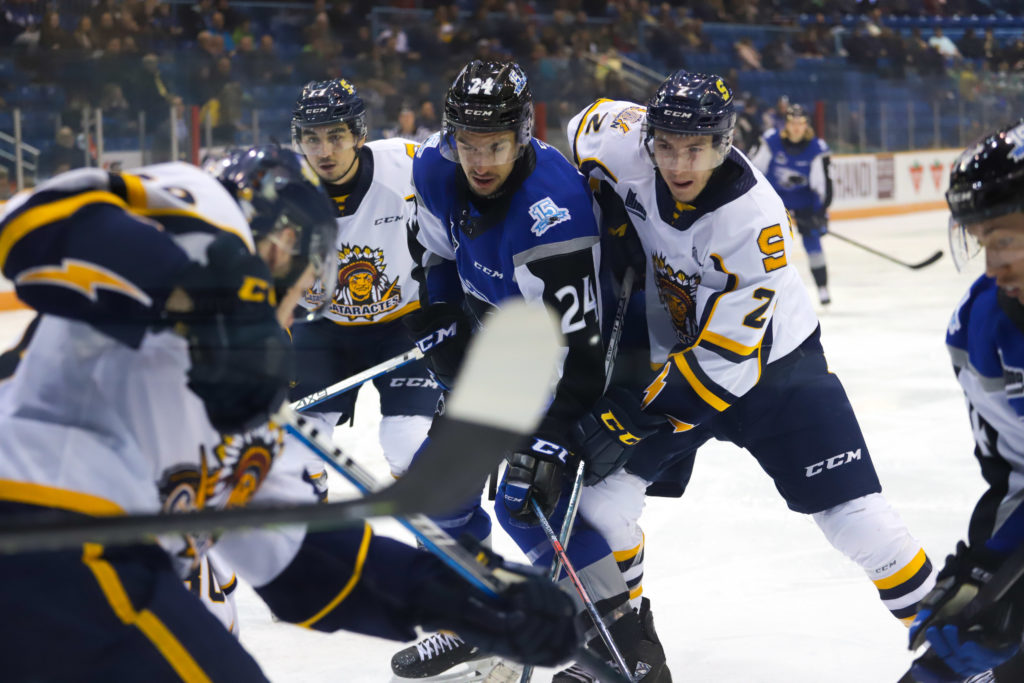 The Saint John Sea Dogs (11-15-1-0) controlled the play to begin the game but fell to the Shawinigan Cataractes (14-11-0-0) after two quick goals in the third period at TD Station.  James White scored his first of the season and Zachary Bouthillier got the start, saving 32 of the 36 shots sent his way on Saturday night.

At 7:18, Matt Gould was sent to the box with a high sticking double minor.  The Sea Dogs killed this penalty, only allowing one shot on goal to reach Bouthillier in the four minutes that they were down a man.

Saint John got their first power play of the game at 12:34 when Tyson Hinds was given a penalty for hooking.

James White opened the scoring with his first of the season, breaking into the Cataractes zone with speed and carrying the puck behind the net for a wraparound goal at 15:58.

Nicholas Deakin-Poot received a boarding penalty at 16:26 and this time the Cataractes power play was more effective offensively, evening up the shots with a flurry of action in the Saint John zone.

Shortly after the Deakin-Poot penalty was killed, a fight broke out between Jordan Spadafore and Gabriel Denis with 56 seconds remaining.

Shots on goal after the first period were tied at nine.

Brady Burns scored his team leading 14th goal of the season, receiving a drop pass from Josh Lawrence and firing a rocket of a wrist shot straight into the back of the net at 2:20, extending his point streak to five games.

The lead increased to 3-0 at 4:42 when William Villeneuve stopped a Shawinigan attempt to clear the zone at the blue line, took a few strides closer to the net and scored top shelf from the faceoff circle.

Shawinigan’s Jordan Lepage was sent to the box for checking to the head at 5:07.

Jérémie Poirier received a penalty for cross-checking at 8:49 and the Shawinigan power play was successful. Gabriel Denis scored at 9:12.

Gabriel Belley-Pelletier was given a penalty for kneeing at 9:29.

Nicholas Deakin-Poot went to the box at 11:52 for hooking.

At 18:31, Vasily Ponomarev scored, tucking in his own rebound and bringing the Cataractes within one.

Shots at the end of the second period were 23-20 for Shawinigan.

Nicolas Guay received delay of game penalty for clearing the puck over the net at 4:59.

Dawson Stairs and William Veillette both went to the box for roughing at 8:32, sending play to 4-on-4 for two minutes.

The Cataractes came back with two quick goals, taking the lead and winning the game. The game tied when Valentin Nussbaumer made his way into the Sea Dogs zone and caught Bouthillier out of position, passed the puck to Gabriel Denis who shot it into an open net at 10:18 and Shawinigan took their first lead of the game a few moments later when Charles Beaudoin was able to get past the defense at 11:17.

The Sea Dogs pulled Bouthillier and called a time out but were unable to get a goal with the extra man.

Shots at the end of the game were 36-27 for Shawinigan.

The Sea Dogs will return to action for the second half of the back to back tomorrow, Sunday December 1st.  Bring a new and unwrapped toy for the Wawanesa toy drive and cheer on the Sea Dogs as they take on the Blainville-Boisbriand Armada at 3 PM in TD Station.  Tickets are available online or at the TD Station box office.