MENU
In response to the suspension of the season by the QMJHL, the Sea Dogs office will be closed until further notice. Please see the below announcement re: existing tickets and flex vouchers. Please hold on to any unused tickets. For questions/information please contact info@saintjohnseadogs.com We thank you for your patience and understanding as we continue to work through this.
January 13, 2020 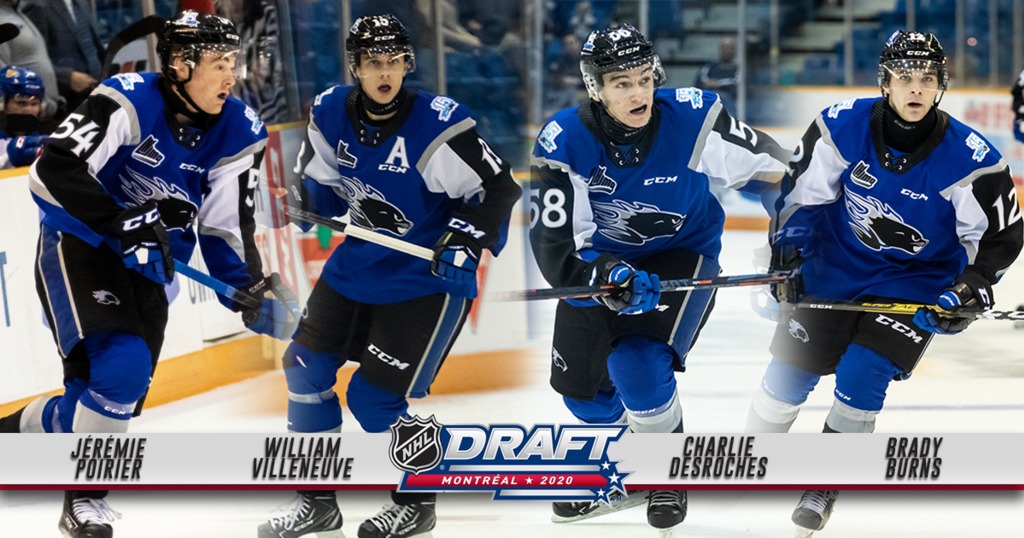 Jérémie Poirier – Defenceman – Ranked #16
Poirier has had a strong showing this season in Saint John, setting career highs in goals, assists and points with only 43 games played. He was named to the Canada Russia Series in November where he represented Team QMJHL in games one and two of the series. On Thursday, Poirier will play in the Kubota CHL/NHL Top Prospects Game in Hamilton, ON. He’ll play on Team Red alongside recent World Juniors gold medalists Quinton Byfield, Jamie Drysdale, and Nicolas Daws.

William Villeneuve  – Defenceman – Ranked #108
Poirier’s defensive partner William Villeneuve is currently ranked second in points by a defenceman in the QMJHL and second overall in points on the Sea Dogs. Villeneuve and Poirier are both well within striking distance of Nathan Beaulieu’s franchise records points by a defenceman (52). While Villeneuve’s most visible contributions are seen on the score sheet, his defensive play is just as notable. He plays big minutes against the league’s top lines and on a Saint John team with a goal differential of -29, William has a +/- of zero. His strong leadership and two-way play should see him jump up the rankings before June.

Charlie DesRoches – Defenceman – Ranked #169
The third defenceman in Saint John’s “Big 3 D” is Charlie DesRoches. A native of Summerside, PEI, Charlie exudes confidence while playing a no nonsense style with very few mistakes. His 24 assists rank 7th overall among defencemen in the QMJHL. His calm, cool, and collected style is sure to keep interest high as we head down the back end of the season.

Brady Burns – Forward – Ranked #188
Making his first appearance in the NHL Central Scouting’s draft ranking is Sea Dogs leading scorer, Brady Burns. Burns is playing just shy of a point-per-game through 43 games this season and his most recent dry stretch of three games was his longest of the season. 22 goals has him tied for 12th in the QMJHL and 3rd among draft eligible players in the league. Burns’ size has always been a question mark at every level of play, but it hasn’t taken him long to find a way to score as a 17-year-old in the QMJHL.