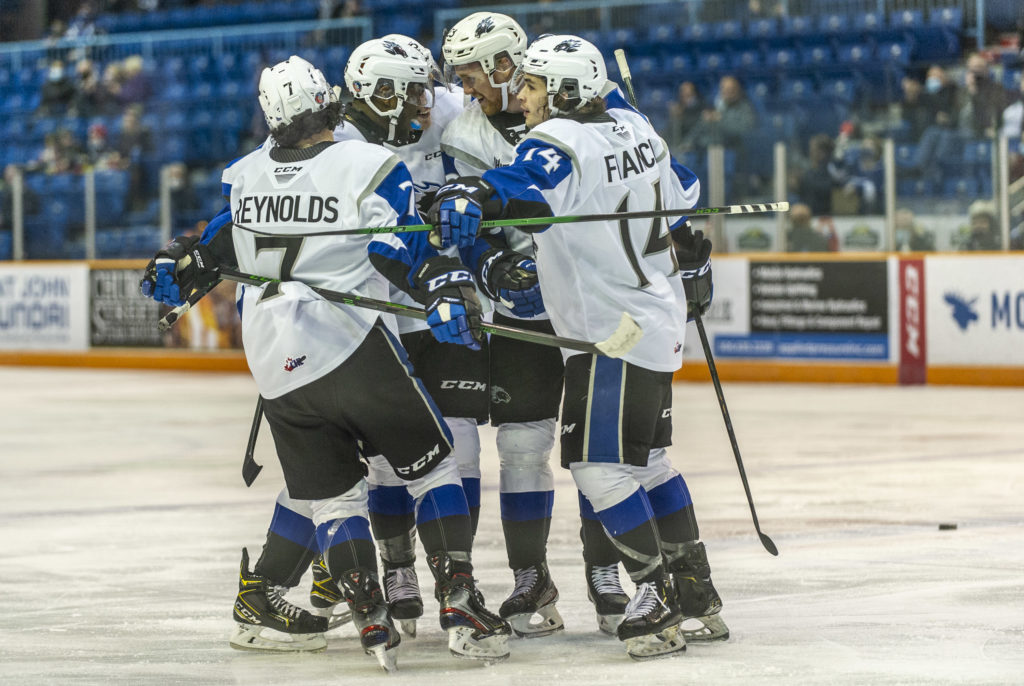 Ryan Francis tied the all-time franchise record for points in a game on Tuesday night as he racked up three goals and three assists in the Saint John Sea Dogs’ (15-12-3-1) 9-2 win over the Acadie-Bathurst Titan (18-10-1-1). Not to be outdone, 17-year-old Peter Reynolds recorded his first hat trick in the QMJHL while Brady Burns stayed red hot notching a goal and two assists.

Zachary Emond picked up his seventh win as a Sea Dog, turning aside 20 of 22 shots faced while Chad Arsenault started for Acadie-Bathurst before being pulled in favor of Jan Bednar prior to the start of the third period. 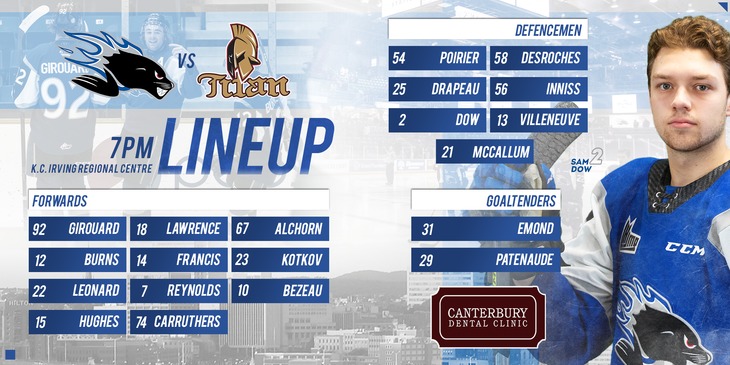 Peter Reynolds opened the scoring just two minutes into the game when he centered a puck from behind the net that bounced off a Titan defender and past Arsenault for the 1-0 lead. Saint John played well defensively, killing two Titan penalties and holding Acadie-Bathurst to just six shots through the first 20 minutes.

Reynolds was once again the benefactor of some puck luck to start the second period when he jammed home a Brady Burns shot that deflected off a leg in front just 54 seconds into the frame. Two minutes later, Josh Lawrence lit the lamp when he gained the zone with speed and fired a wrister for his fifth goal of the season putting the Sea Dogs in front 3-0. The Titan would respond to cut the lead to 3-1 but it would be all Sea Dogs for the remainder of the second.

At 10:05 Ryan Francis scored his first of the game on a shot that just trickled past the line. Only 30 seconds later Francis scored a no doubter on the power play with a hard on-timer from left circle, his 14th and 15th goals of the year.

With under three minutes to play in the period, Brady Burns thread the needle from the corner and beat Arsenault to the post for his team leading 18th goal of the year and a 6-1 lead. Burns continues to impress as of late, in his last 10 games he has 12 goals and six assists.

Saint John squashed any hopes of a Titan comeback when Nicholas Girouard scored on the rush just 20 seconds into the third period. The 19-year-old forward has had a strong month, producing five goals and six assists in his last six games. 44 seconds later, Peter Reynolds scored to complete the hat trick and make it 8-1 Saint John.

The Titan would add a power play goal but Ryan Francis responded just 22 seconds later with his third goal of the night for the final score, 9-2.

This was Francis’ second hat trick since joining Saint John for the second half of this season. His first hat trick also took place in Bathurst during his first game as a Sea Dog back on March 9th of this year. His six point performance ties the franchise record for most points in a game, currently co-held by Steven Anthony and Alexandre Picard-Hooper.

Saint John will have a few days rest before back-to-back games at TD Station starting on Friday night in a rematch with the Titan at 7pm and then Saturday night against the Moncton Wildcats. Terrapure Bubble Packs are available in sets of 2, 4 or 6 for both games at the TD Station Box Office and online. Season Ticket Members can use tickets from April 3rd, 2021 for Friday’s game and tickets from February 18th, 2021 for Saturday’s game. Can’t make the game? Catch all the action on Sea Dogs Radio Presented By TD on CFBC 930AM.