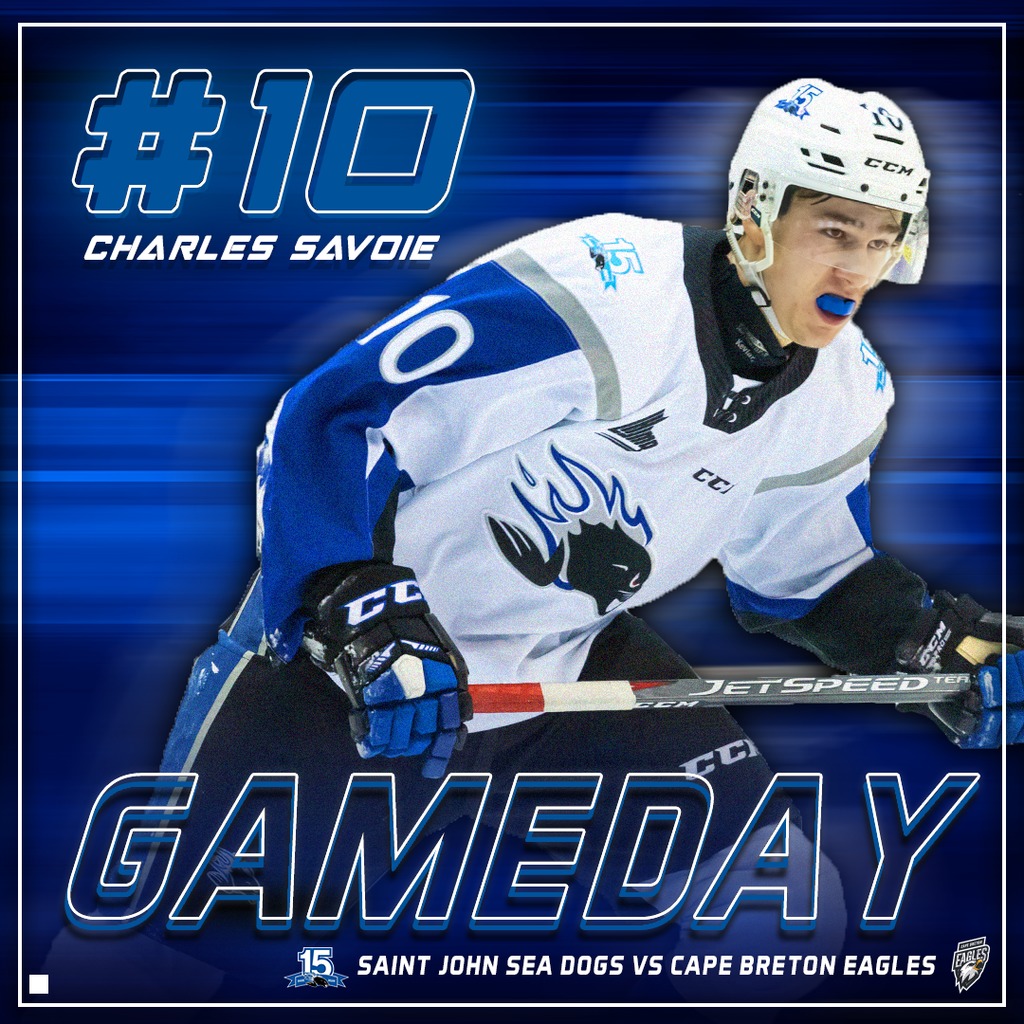 The Saint John John Sea Dogs (20-19-1-0) host the Cape Breton Eagles (22-13-2-1) tonight at 7pm at TD Station for the first game of a home and home series with the Eagles. This is the forth meeting between the two clubs this season. Saint John won the last contest on November 27th, defeating the Eagles in a shootout, 4-3. Cape Breton took the first two match-ups at home, 6-5 and 8-3 back in September.

Only six points separate the Sea Dogs and Eagles in the Eastern Conference. The Eagles are 6-3-1-0 in their last 10 games while Saint John is 7-3-0-0.

This is the first game for either team following the closing of the QMJHL’s trade deadline that passed on Monday afternoon. The Eagles added several pieces during the trade period as they load up for a potential deep playoff run. Defenceman Xavier Bouchard was acquired from Baie-Comeau as the trade period opened. Bouchard was drafted to the Vegas Golden Knights in the sixth round of the 2018 draft.

On the front end the Eagles added forward Shawn Element from the Acadie-Bathurst Titan. Element has 23 goals in 37 games this season. Following Element is Tyler Hinam who joins the Eagles from Rouyn-Noranda where he won a Memorial Cup in 2019. The Eagles will look to draw from his playoff experience.

The Sea Dogs were relatively quiet to end the trade period, dealing goaltending prospect Tommy DaSilva (2001) to the Gatineau Olympiques in exchange for a 10th round pick in 2022 as well as sending forward Alexis Belisle (2002) to the Victoriaville Tigres for a 2021 6th round pick and a 2022 10th round pick. Saint John opened the trading period on December 15th, 2019 with the announcement that team captain Nicolas Guay would be traded to the Rimouski Oceanic for fellow overager Jeffrey Durocher with a combination of picks being swapped both ways. Durocher has had a stellar start to his time in the Port City, contributing four goals and three assists through his first five games. The 6’01” winger was also nominated to represent the QMJHL in the CHL Showdown for the week for his New Year’s Eve spin-o-rama goal against the Halifax Mooseheads. You can vote for Durocher here.

Saint John also announced the release of defenceman Olivier Desroches (2001) and forward Jérémie Jacob (2001). The two have since been claimed off waivers by the Halifax Mooseheads and Acadie-Bathurst Titan respectively.

Returning to the line-up for Saint John will be Maxim Cajkovic who joins the Sea Dogs after a stint with the Slovakian National Junior Team at the World Juniors. Slovakia finished fourth in Group A going 1-3-0-0 before facing eventual tournament champions, Team Canada in the quarter finals. This will be Max’s first game since December sixth. The Tampa Bay Lightning prospect had been on a torrid pace before being sidelined with an upper body injury just prior to leaving for the World Juniors. Cajkovic has 22 points in just 16 games with Saint John this season.

Returning to the Eagles line-up from the World Juniors is forward Egor Sokolov who represented Team Russia en route to a silver medal. The 19-year-old winger leads the Eagles in goals and points, notching 24 goals in 30 games.

Catch all the action tonight at 7pm at TD Station before both teams head to Sydney for Friday night’s game at Centre 200. Listen along at sjseadogs.com/live