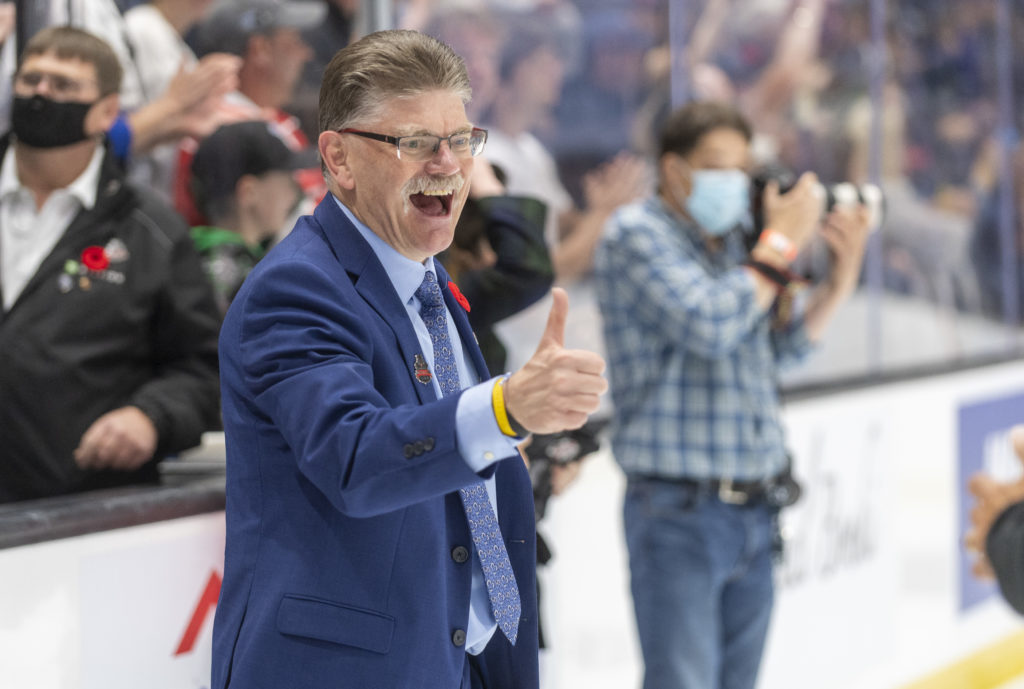 Decorated UNB REDs head coach Gardiner MacDougall made a lasting impact on the city of Saint John when he received a call from Sea Dogs President and General Manager Trevor Georgie and decided to embark on a whirlwind month that culminated with him lifting the Memorial Cup on the ice at TD Station.

“I don’t know if you even think,” said MacDougall on his decision to join the Sea Dogs last May. “It’s just, you know, an opportunity and you hope you’re prepared for an opportunity like that. It happened very quick, I didn’t have a lot of time to think about it, it was really a call in the morning and make a decision kind of in your heart that night that, you just want to make sure that when you wake up in the morning it feels right and then you’ve just got to go.”

When asked about his experience in Saint John, MacDougall finds himself going back to the same word to describe his time with the Sea Dogs: Exhilarating. Defined as “making one feel very happy, animated, or elated; thrilling”, ‘exhilarating’ may be the only word to describe the full range of emotions the Memorial Cup tournament brought to the experienced head coach.

“It was exhilarating. I think I used the word when I got there and it was capitals when I finished. You know, when you look back, you get a bit of time to look at the whole event in retrospect because things really happened fast and full credit to the players for the buy-in. It was one of those just tremendous moments in the hockey annals. In retrospect just really exhilarating and really really positive.”

One of the winningest coaches in the history of Canadian University Sports history, with seven National Championships, two World University Games Championships, ten Atlantic University Sport (AUS) Titles, and fourteen AUS Pennants, MacDougall knows big events. During June of last year, he approached the Sea Dogs the same way he has approached the REDs for the past 22 years: trying to make a difference and helping players play the best hockey possible. 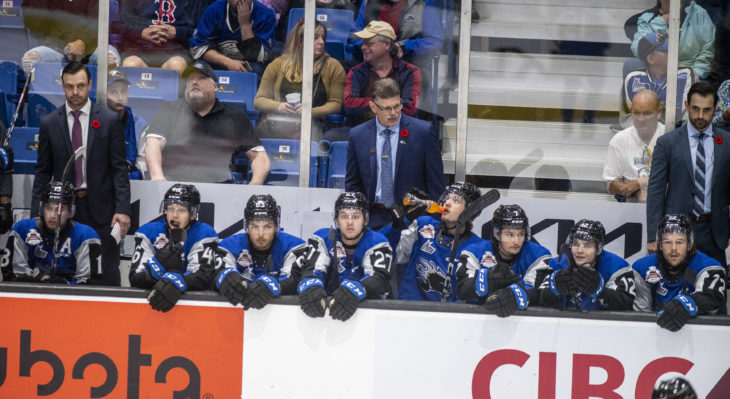 “So you really don’t think. You know it’s a big event, but really, it’s similar to what we try to do at UNB, we try to make a difference with the players. It really comes down to our whole staff, the general manager, and the owner, it’s all trying to serve the players and give them the best opportunity to have success. We’re fortunate to create that foundation and that environment that they thrive in. I think a lot of them would have played the best hockey of their lives during that Memorial Cup, you can’t ask for more.”

While preparing for this season with the UNB REDs Men’s Hockey Team, currently sitting first in the AUS standings with a 13-4 record, MacDougall was able to enjoy two days with the Memorial Cup, celebrating in Summerside as a parade marshall and in Fredericton in August, taking in the history of the trophy with family and loved ones.

“You get a chance to just see the history of that and all the great players that have won it and the great coaches that were part of it. You know the tradition of the Memorial Cup from the outside, you know it’s the biggest event in major junior hockey, really amateur hockey, but when you become a part of it and you actually see that esteemed trophy you really see the significance of it.”

Joining the Sea Dogs for only a little over a month, Coach Mac has secured his place in Saint John sporting history, leaving his mark on the city forever. He will be back in Saint John this afternoon for the first time since winning the Memorial Cup, but he has felt the support all summer long.

“Certainly I’m not big on social media, but people tell me. That was one of my goals in that opening press conference, was to try to make a difference, first of all with the players and the Sea Dogs, but also the city of Saint John and really the province of New Brunswick and Atlantic Canada. I had mentioned that the Moncton Midget team [Moncton Flyers] had won the national championship and what a huge honour that is, for Moncton and for the province, so now we’re getting those opportunities. Those are lifetime moments and you usually just get one.”

‘Lady Mo’ was a big takeaway from the Memorial Cup tournament in June, having spread over social media after MacDougall mentioned her in the post game press conference after the comeback win against Shawinigan. ‘Lady Momentum’ was the embodiment of the support the team could feel from the fans in the arena, the home ice advantage personified, but MacDougall says that that was not the first time the players felt the support of their hometown crowd.

Prior to setting foot on the ice for a game, all of the teams participating drove down Water Street in a parade. Fans came in droves to show their support for the Port City team, and the players got the message loud and clear.

“I don’t think you can describe when you get the momentum behind you. I even go back to the parade that we had before the Memorial Cup. There was a tremendous turnout and still there was a lot of uncertainty, we didn’t know how they would play, their last game they had lost in the playoffs, but there was no doubt in those people when we had that parade. They were ecstatic. I think that event was a bit of a difference maker. Sometimes it’s just little things. The players came off that bus and they were beaming, they just knew the city was behind them.”

After seeing the support of the Sea Dogs faithful, all there was left to do was to prove they had earned it on the ice and they did so with a win to open the tournament.

“Until that first game, I don’t know if our players realized what it was going to feel like. When you get a little bit of that it’s almost like an addiction, you want to please the fans. That opening game to get the victory I think was the difference maker in the series.”

“Every game, I say ‘confidence, you have to earn it and it’s by how you work and how you prepare’, but obviously a result really helps. I thought the guys had some confidence but the fans were a big part of that and then the momentum kept escalating throughout the tournament and reached a crescendo in that comeback in the second period against Shawinigan and at another level in the Memorial Cup final. We were fortunate in that game to score first. Lady Mo was right behind us.”

All November long, the Sea Dogs have tied the theme of Lady Mo into a Movember campaign, looking to use their platform to raise money and put momentum behind the fight for men’s health, including prostate cancer, testicular cancer, and mental health issues. This tie in was especially fitting for MacDougall, as he has been touched personally by cancer, with several close members of his family having passed away from the disease.

“It’s no question it’s a key month. It’s tremendous the whole hockey community, specifically in this case the Saint John Sea Dogs. It’s a disease that has affected probably every family in Canada. My father passed away with cancer, my grandfather passed away, I’ve lost two brother-in-laws, including one just two months ago. It’s significant. Anything we can do to help research, to expedite the process, to try to eliminate this, I think we have to be in 100%.”