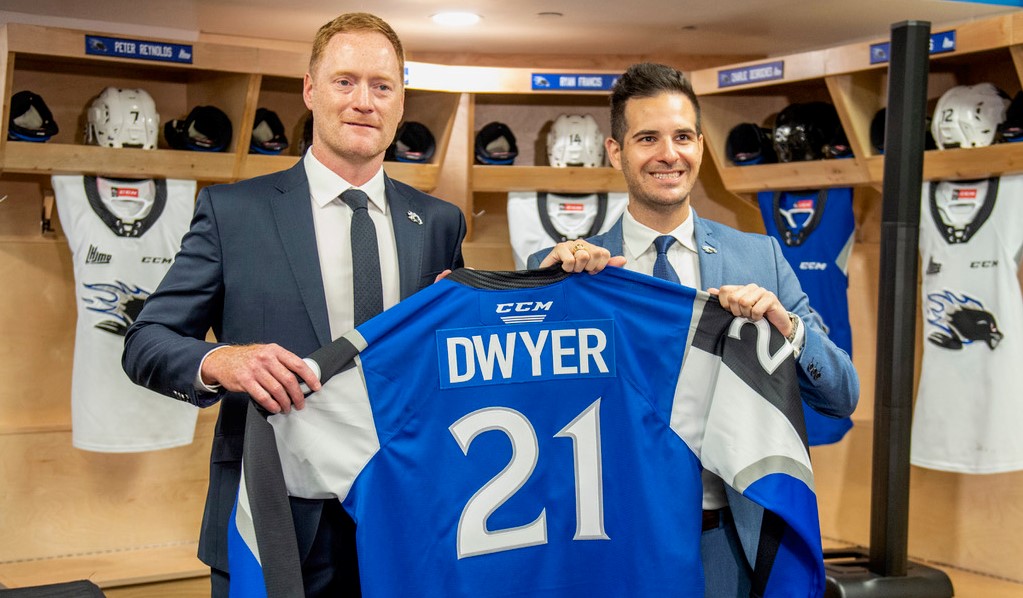 Dwyer, a five-year veteran of the NHL began his coaching career with the Junior ‘A’ Summerside Western Capitals in 2009 before leading them to a MJHL Championship in 2011. He would go on to coach the PEI Rocket/Charlottetown Islanders for four seasons before coaching professionally in the KHL and the NLA.

A native of Dalhousie, New Brunswick, Dwyer is very familiar with the QMJHL after playing five seasons in the league, capturing the President Cup in 1995 in his rookie season as a member of the Hull Olympiques.

“I’m thrilled to join and lead the Sea Dogs during an exciting time for the entire organization and passionate fan base in Saint John,” explained Dwyer. “I’m looking forward to working with our talented group of players, driving the development and performance to collectively reach our full potential.”

In the NHL, Dwyer played as a member of the Tampa Bay Lightning, New York Rangers and Montreal Canadiens. Filling the enforcer role, he logged 394 penalty minutes in 108 games.

Dwyer became a member of Team Canada for the first time in his career as an assistant coach with the Canada U18 team in 2012. Since then, he has coached with Team Canada on four more occasions; as an assistant at the Spengler Cup in 2017 and 2019, as the head coach for Canada U16 at the Youth Olympic Games and most recently as an assistant with the gold medal winning Canada U18 program at the 2021 IIHF U18 World Championship in Texas.

“We’re happy to welcome Gordie as our new Head Coach,” said Sea Dogs President & General Manager, Trevor Georgie. “He has a variety of interesting coaching experiences, including coaching professionally in Europe and coaching in the QMJHL. He knows our League, and he has coached in the Maritimes division. He is coming off winning a gold medal with Canada’s Under-18 team and is highly motivated. I look forward to welcoming him and his family to the Sea Dogs.”

Dwyer is the ninth head coach in franchise history and will take over head coaching duties from Greg Gilbert.

“Greg has a lot of experience and hockey knowledge,” added Georgie. “We look forward to having him contribute in a meaningful way with our club moving forward.”