Hurtubise: “We Know We Can Do It” 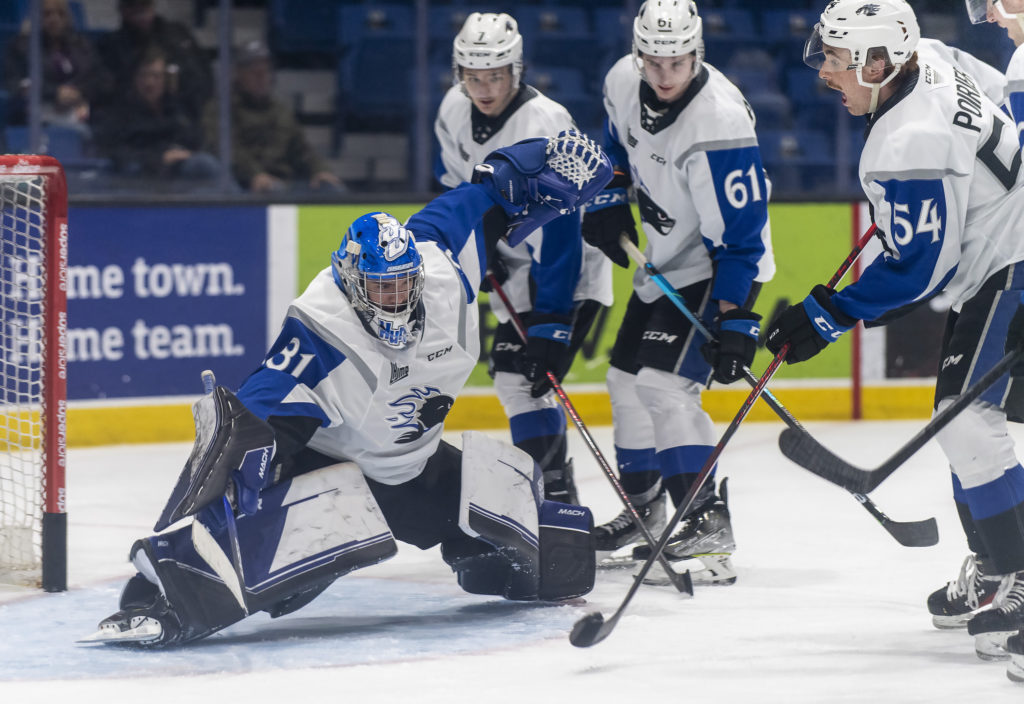 [Originally written for May 5 Gameday Program]

The Sea Dogs are firing on all cylinders going into the 2022 President Cup Playoffs. Putting up a stellar 34-5-0-1 record since returning after the break and winning their last fifteen games of the season, the Port City team is ready to go. Scoring has been the story of the season, the team won the Luc Robitaille Trophy for being the best offensive team in the QMJHL and several Sea Dogs set new franchise records for goals and assists, but the play in their own zone and goaltending, split between Nikolas Hurtubise and Thomas Couture, should also be recognized.

Winning all of his starts in April, and putting up a .918 save percentage and 2.30 goals against average over six games, Hurtubise is ready to take the success the team has seen in the second half of the season and take it into the playoffs.

“It’s huge,” he said of the momentum the team is bringing into the postseason. “We know that we can win a lot of games in the playoffs. We have thirteen games to win the cup, and now we are on a streak of fifteen games, so we know we can do it and that’s huge for us.”

The Port City team will be facing off against the Rimouski Oceanic for the five game first round of the playoffs. The veteran netminder, having won the President Cup last season with the Victoriaville Tigres, has played in this shortened playoff format before. The Tigres swept Rouyn-Noranda before beating Blainville-Boisbriand and then Charlottetown in consecutive five game series. The Tigres then won the cup in game six of the seven game final against Val-d’Or.

“It does!” he said when asked if a five game series felt different to a seven game series. “It does. You know, at the end of the day, it’s the same thing, but the ultimate game just comes quicker. Yeah, you can’t lose game one. That’s it.”

The President Cup champion brings experience to a Sea Dogs roster that has not had much time in the playoffs. He won 11 games on Victoriaville’s way to the Cup, with a 2.54 goals against average and .908 save percentage in 15 games. He says that with that experience comes a sense of calm. The playoffs are a stressful time of highs and lows, and as someone that has been there before, he brings calmness, not only for himself, but the locker room.

“It’s experience. It’s the way we prepare, it’s the way we act, on and off the ice. That’s the kind of thing you can bring, and I can bring a lot of calm too. In the playoffs, there are a lot of stressful moments and I know how to stay calm, because I’ve done it before. That’s what I can bring.”

“He’s a great goalie,” said Couture on what it was like to split starts with Hurtubise. “He’s a fun presence to have around the room. He’s very likable and he brings good energy to the team. He’s very confident on the ice and off the ice, and he helps the team a lot.”

The Sea Dogs will be facing off against Rimouski tonight. The last time the teams met was in early February, when each team took a win in the season series.

Going into game one, the netminder only had one thing to say to Sea Dogs fans.

“We’ll win a championship this year.”