MENU
In response to the suspension of the season by the QMJHL, the Sea Dogs office will be closed until further notice. Please see the below announcement re: existing tickets and flex vouchers. Please hold on to any unused tickets. For questions/information please contact info@saintjohnseadogs.com We thank you for your patience and understanding as we continue to work through this.
March 6, 2020 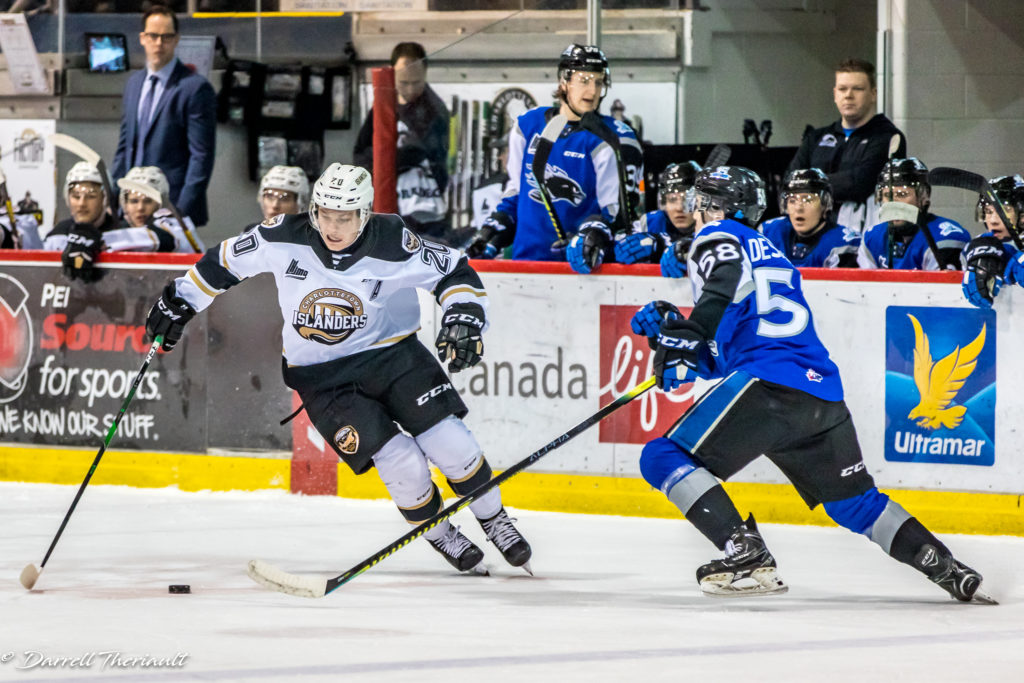 The Saint John Sea Dogs (30-32-1-0) fell to the Charlottetown Islanders (33-35-5-0) 6-2 for the third game in a row in Charlottetown on Friday night. A late goal in the second period from Joshua Roy and an early goal in the third period from Jeffrey Durocher got the Sea Dogs on the board, but two goal third periods from Cédric Desruisseaux and Cole Edwards pushed the Islanders to the win.

Zachary Bouthillier returned from a lower body injury that kept him out of the past two games, facing 54 shots and making 48 saves in his start. Rookie Islanders goaltender Jacob Goobie stopped 38 of the 40 shots the Sea Dogs sent his way.

The Islanders struck early, taking the lead when Zachary Beauregard netted his eighth goal of the season two minutes into the game.

Jordan Spadafore and Liam Peyton dropped the gloves in a fight that left the Sea Dogs with a power play when Liam Peyton was given an additional two minutes for unsportsmanlike conduct.

Sea Dogs power play got another chance halfway through the period after a cross-checking penalty sent Ethan Crossman to the box.

The Islanders power play came out for the first time of the night at 13:43 when Brendan Sibley was sent off for cross-checking, but the power play was cut short when goaltender Jacob Goobie handled the puck outside of the trapezoid and play went to four-on-four. Drew Johnston extended the Islanders lead with the extra room on the ice, sending the puck past Zachary Bouthillier on his backhand.

Shots after the first were 15-12 for the Islanders.

The second period was fast paced, with few whistles and 40 shots between both teams.  Each team went on the power play twice in the period, but the penalty kill performances remained perfect on both sides.

The Sea Dogs kept the pressure on and hard work paid off when 2019 first overall pick Joshua Roy got the Sea Dogs got on the board with his 16th goal of the season, deflecting a shot by William Villeneuve from the point and bringing the score within one.

The Islanders fourth power play of the night came when Kale McCallum was sent off for holding with 56 seconds remaining in the period, and the man advantage carried into the final frame.

Shots after the second were 36-31 for the Islanders.

The Islanders broke through the Sea Dogs penalty kill with a goal 19 seconds into the period. The play went to review because of some shoving in the crease, but Cédric Desruisseaux was ultimately awarded the goal.

On a three-on-one rush, Jeffrey Durocher brought the Sea Dogs back within one, firing the puck past Jacob Goobie for his 23rd goal of the season at 3:03.

A quick goal 28 seconds later from Cédric Desruisseaux off a faceoff gave the Islanders their two-goal lead back. They added another 49 seconds later when Cole Edwards fired the puck past Zachary Bouthillier from the top of the faceoff circle.

The final shots were 54-40 for the Islanders.

The Sea Dogs return to home ice tomorrow, March 7, for their third game in three nights, taking on the Drummondville Voltigeurs. Puck drop is at 7PM.  Tickets are available at the TD Station box office.

Any fans who wish to redeem their unused flex tickets should do so quickly as only three regular season home games (March 7th, 20th, and 21st) remain and flex tickets cannot be used for the playoffs or next season.