MENU
In response to the suspension of the season by the QMJHL, the Sea Dogs office will be closed until further notice. Please see the below announcement re: existing tickets and flex vouchers. Please hold on to any unused tickets. For questions/information please contact info@saintjohnseadogs.com We thank you for your patience and understanding as we continue to work through this.
March 5, 2020

ISLANDERS TAKE SECOND IN A ROW OVER SEA DOGS 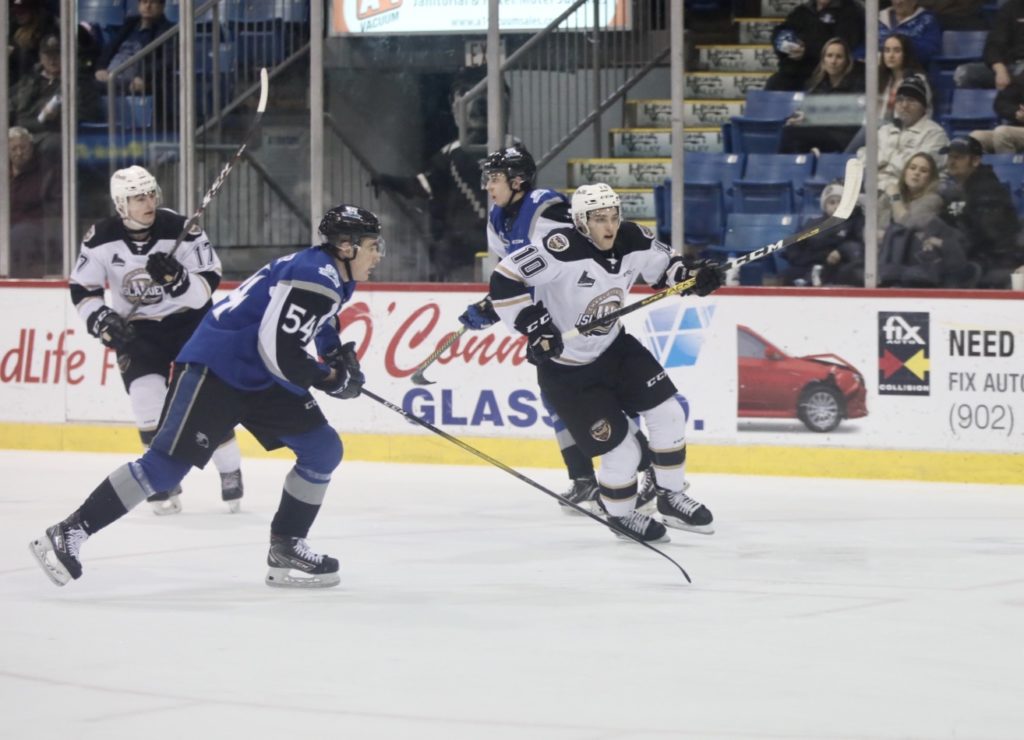 The Saint John Sea Dogs (30-31-1-0) fell to the Charlottetown Islanders (32-35-5-0) 6-2 for the second game in a row on Thursday night at the Eastlink Centre. Jérémie Poirier and Brady Burns scored late for the Sea Dogs but it was too little, too late for the Port City Team.

Noah Patenaude got his second straight start for Saint John while Zachary Bouthillier is listed day-to-day with a lower body injury. Affiliate goaltender Mathias Savoie filled in as the backup for Patenaude. Matthew Welsh got the nod for the Islanders.

Also missing for Saint John was import star Maxim Cajkovic who is also day-to-day with a lower body injury. The Tampa Bay Lightning prospect has 42 points in 35 games this season.

After a lackluster performance by the Sea Dogs on Sunday afternoon at TD Station the Dogs came out strong in the first period and seemed to set the pace for the first 10 minutes, but the always stalwart Islanders pressured back.

Cédric Desruisseaux struck first for the Isles with his 12th of the year at 11:22. With under four minutes to go in the period Thomas Casey found twine and the Islanders were up two.

Charles Savoie went off for high sticking at 17:16 and the Islanders capitalized with the man advantage to take a 3-0 stranglehold into the second period.

Unfortunately the second period saw much of the same as Gaetan Jobin potted a pair of goals, at 7:29 and then a power play marker just before the buzzer to send Saint John to the dressing room down 5-0.

Charlottetown added another three minutes into the third but the Dogs did fight back out shooting the Islanders in the period 15-10.

Jérémie Poirier moved in close and knocked home his own rebound for his 20th of the season at 9:31. His franchise leading 20 goals in a single season for a defenceman also ranks in the top 100 all time in the QMJHL. The all time record for a d-man of 42 goals in a season was set by Marc-André Bergeron in the 2000-01 season.

Brady Burns scored a power play goal for the Sea Dogs in the final minute, his team leading 27th of the year. The final score, 6-2 Islanders.

Patenaude was 28 of 34 between the pipes while Matthew Welsh stopped 27 of 29 for the win.

Saint John will have another crack at the Islanders on Friday night at 730pm. The Sea Dogs return home on Saturday for the third game of a three-in-three as they play host to the Drummondville Voltigeurs. Game time is set for 7pm at TD Station.

If you have unused FLEX tickets NOW is the time to use them. Flex tickets MUST be redeemed by March 21st (our final home game). Flex Tickets CANNOT be used for playoff games or next season.

We urge fans to redeem early as we cannot guarantee availability for our final two home games. These games historically sell well and once they’re sold out, they’re sold out! A flex ticket does NOT guarantee your entry into a game until it is redeemed for a ticket at the box office.