ISLES TAKE GAME ONE OF BACK-TO-BACK 4-1 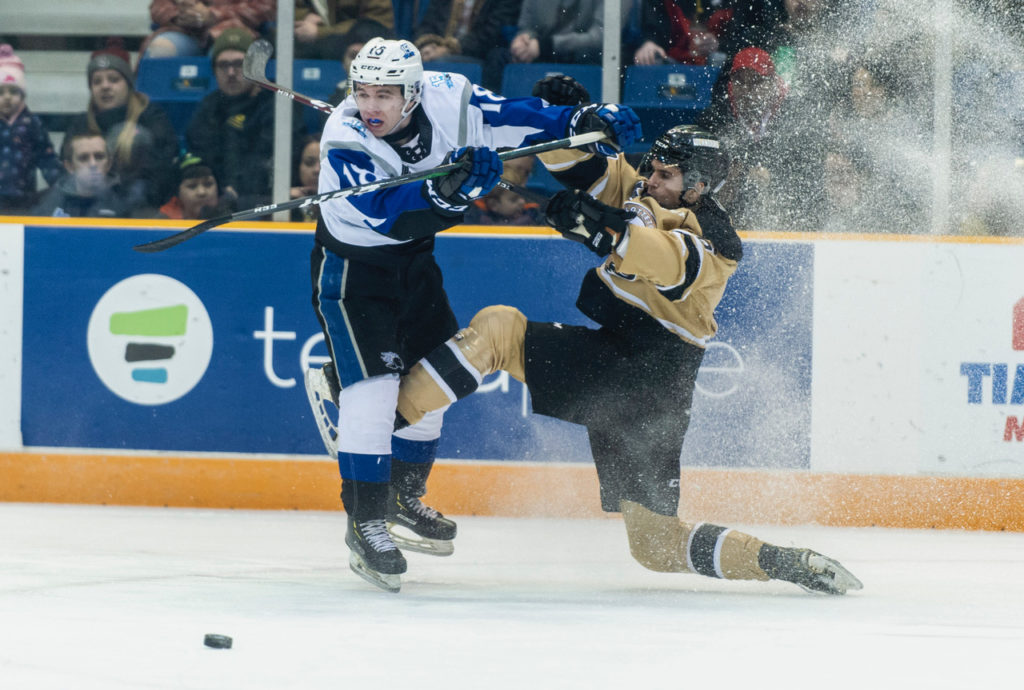 The Saint John Sea Dogs (19-19-1-0) dropped the first of two games in two nights against the Charlottetown Islanders (22-13-5-0) in their first game of 2020 on Friday night. The game was close but turned when a goal by Nicholas Deakin-Poot was called back because of an Islanders goal that went uncalled earlier in the same play, giving the Islanders a 2-0 lead instead of tying the game.  A late game push sparked by a Josh Lawrence goal was not enough and the Sea Dogs fell 4-1 at TD Station.

The Sea Dogs were missing roster regulars Maxim Cajkovic, who is away at the World Junior Championships, and Ben Badalamenti, who did not play due to a lower body injury.

Zachary Bouthillier started in net for the Sea Dogs, stopping 27 of the 30 shots he faced in the 4-1 loss. Matthew Welsh got the start in net for the Islanders.

The Sea Dogs went to the penalty kill early in the period after Nicholas Deakin-Poot sent the puck over the glass and received a penalty for delay of game. The Islanders leading scorer Brett Budgell opened the scoring at 6:17 picking up a rebound in front of the net on the power play.

The Sea Dogs got another chance on the power play when Zachary Beauregard was called for hooking at 18:34, the man advantage continued into the second frame.

Shots at the end of the first period were 10-5 for the Islanders.

An interference penalty to Thomas Casey at 7:59 sent the Sea Dogs power play out once more, they were unable to even the score with the extra attacker, but a stellar save by Bouthillier on a two-on-one rush just after the penalty ended kept the Sea Dogs within one.

Jordan Spadafore received a double minor for high sticking at 10:57. James White cleared the puck over the glass and was sent off for delay of game and the Sea Dogs were forced to defend the five-on-three Islanders advantage for 1:04. The Sea Dogs successfully killed both penalties.

Shots after the second period were 20-12 for the Islanders.

Nicholas Deakin-Poot thought he tied the game up early in the third period, sending the puck in front of the net, where it bounced off of a Charlottetown players skate and into the net, but the goal was called back after a review showed that Charlottetown had scored earlier in the play when a puck that appeared to have bounced off the crossbar actually crossed the goal line.

Play went to four-on-four when Nicholas Deakin-Poot received a roughing penalty and Noah Laaouan was sent off for kneeing at 3:22. Neither team scored with the extra room.

A diving save by Bouthillier stopped a shot by the Islanders, but the puck slipped free and Cédric Desruisseaux tapped the loose puck into the net at 8:31.

Josh Lawrence broke Matthew Welsh’s shutout, tapping a rebound into the open net and bringing the Sea Dogs within two with 5:42 remaining in the game.

The Sea Dogs pulled their goaltender and called a timeout to attempt to rally and force overtime, but they were unable to score with the extra man.  The Islanders scored in the empty net and won the game 4-1.

Final shots of the game were 30-28 for the Islanders.

The Sea Dogs will meet the Islanders again tomorrow, January 4 at 7PM. Tickets are available at the TD Station box office and online.