JÉRÉMIE POIRIER: A LEVEL UP 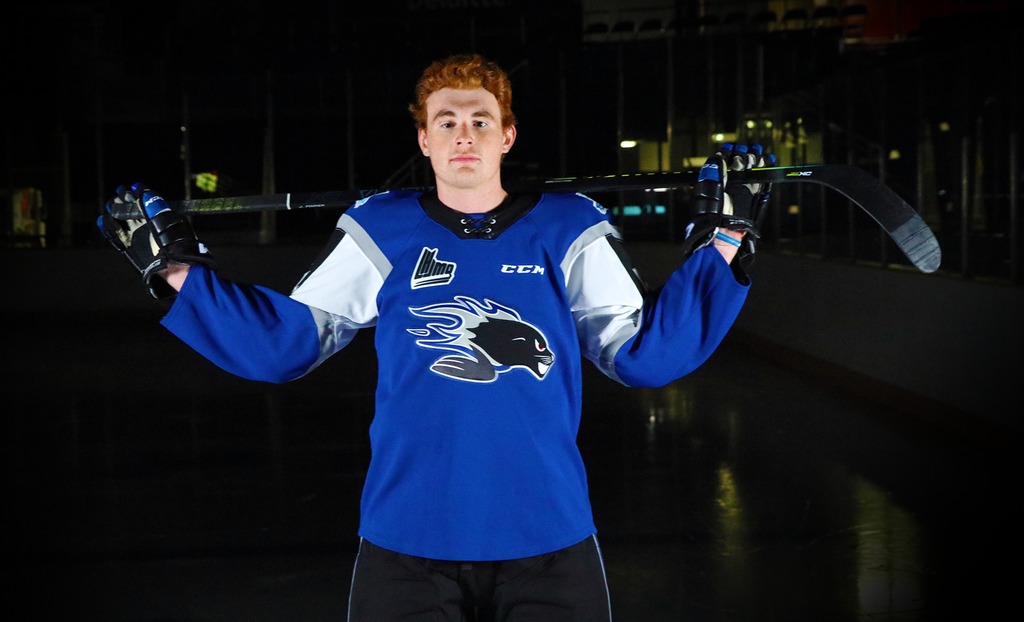 One year ago, defenceman Jérémie Poirier was a highly touted prospect waiting to play his first game in the QMJHL. Now entering his second season with the Saint John Sea Dogs, he has that first game under his belt and then some.

Jérémie Poirier was drafted to the Saint John Sea Dogs 8th overall in the 2018 QMJHL Entry Draft. His exceptional rookie campaign in the Port City tallying six goals and 15 assists for 21 points in 61 games was enough to get him noticed by Hockey Canada, not once, but twice. The 6’0 native of Salaberry-de-Valleyfield, QC participated in the World Under-17 Hockey Challenge as part of Team Canada White last November where he notched three goals and three assists in five games—the most points by a defenceman in the tournament. His offensive prowess then earned him a spot on this summer’s Canada U18 team at the Hlinka Gretzky Cup in Slovakia and the Czech Republic where he brought home a silver medal.

“I think it was a tremendous experience for me,” said Poirier who finished the tournament with a goal and two assists. “I had a chance to play against the best in the world in my age group. Those players are going to go through the NHL Draft this year and to compete against them all tournament was great, I think it’s going to help me for the rest of the season and for my draft at the end of the year.”

Experience with Hockey Canada is a hot commodity for young players looking to break through to the next level. For Jérémie it was the off-ice lessons he learned during his time with the national team that he found most valuable.

“Probably the main thing I picked up there was the preparation before and after the game like cool downs and warm-ups. I realize how important every part of your game is now, so I’m going to bring that to my game and how I prepare this year.”

Preparation will indeed be paramount for Poirier this season as he enters his first year of draft eligibility, something he’s trying not to think too much about.

“If I just focus on my game and focus on the team right now and then we’ll see what happens at the draft,” he said. Obviously sometimes I look at the ranking, or my family or friends do, and people tell me where I am ranked but I just try to just back off from that a little bit. We have a ton of guys that can be drafted so we’re helping each other out. On the personal side I talk to [Cajkovic] about what it’s like having pressure on your draft year and he just said try and play your game and you’ll see at the end of the year. I think that’s very important right now.”

Armed with a full season of QMJHL experience and two international tournaments donning the red and white, Poirier is poised to improve on his rookie campaign and help elevate his Saint John team.

“I think it was a pretty good first year for me, but from a team perspective I think we can do a lot better this year and kind of prove people wrong. I think this year it’s time for a change. Our culture has changed and it’s going to be a new year, a new start.”

Part of that culture change comes in the form of new additions to the Sea Dogs. This off-season Saint John added fellow 17-year-old defenceman and Quispamsis product, Kale McCallum to the Sea Dogs and Porier claims his new teammate has already been contributing to the team in a big way.

“Kale McCallum on the back end, he’s playing really well right now. He’s picked up some points in the pre-season games and if he keeps playing like that during the season it’s going to help us a lot.”

This year’s Saint John roster will feature eight returning 17-year-olds who will look to make a big impact up and down the lineup. Alexis Belisle, Brady Burns, Charlie DesRoches, Alex Drover, Josh Lawrence, Dawson Stairs, and William Villeneuve will join Poirier as players on the verge of break out years as they enter their first year of NHL draft eligibility. Poirier has already noticed a difference on the ice during training camp.

“We’re playing faster and the guys have more experience, they are more confident with the puck, they are just making the right plays at the right time, so I think that’s helped us a lot.”

Poirier will be front and center as the Saint John Sea Dogs kick off the 2019-20 season at the newly named TD Station on September 20th, 2019.