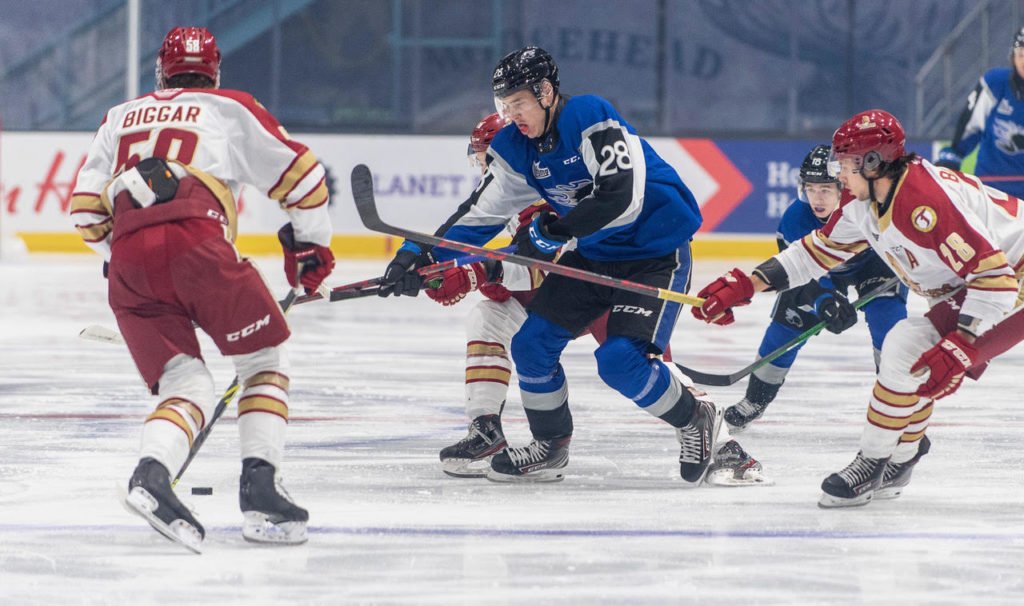 The Saint John Sea Dogs (4-4-0-2) defeated the Acadie-Bathurst Titan (6-2-0-2) in the shootout in a Sunday matinee today. A 39 save performance from Jonathan Lemieux, as well as goals from Evgeny Sapelnikov, Peter Reynolds, and Josh Lawrence led the way in the win in Bathurst.

Saint John’s Jonathan Lemieux got the start in the 4-3 win, making 39 saves and stopping both shot attempts in the shootout. Jan Bednar started in net for the Titan stopping 34 of 37 Sea Dogs shots. 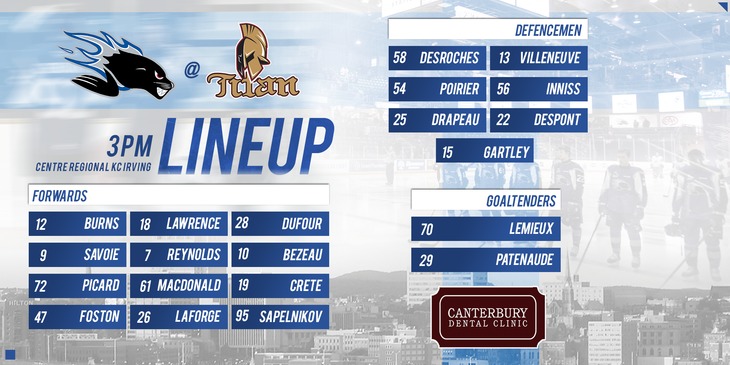 Less than a minute into the game, Titan defenceman Harijs Brants was sent off for tripping and the Sea Dogs power play got their first opportunity early. Evgeny Sapelnikov opened the scoring with his second goal of the season on the power play at 2:52.

The Titan tied it up at one with a goal from Dylan Andrews at 8:26.

At 11:42, Harijs Brants was sent off for boarding. After the hit, Cole Foston dropped the gloves with Cameron MacLean. Both players received five for fighting and a game misconduct, and Foston received a minor for instigating. Play went to 4-on-4 for two minutes.

Once both teams returned to full strength, Riley Bezeau picked up his second assist of the night. Sending a setup pass to Peter Reynolds in front of the Titan net, the Sea Dogs took a 2-1 lead at 15:20.

Shots after the first were 16-10 for Saint John.

The power play came out again after a  roughing penalty to Jacob Melanson at 10:46, but the score remained the same.

At 15:19 Olivier Picard and Cole Huckins were sent off with coincidental minors, Picard for roughing and Huckins for unsportsmanlike conduct, and play went to 4-on-4. The Titan took advantage of the extra space on the ice and Riley Kidney scored his seventh of the season, closing the Sea Dogs lead to 3-2 going into the third period.

Shots after the second period were 30-23 for Saint John.

The two teams exchanged chances back and forth for the third period, but the goaltenders stood strong. With 3:24 remaining in regulation, Jacob Melanson was able to break past the Sea Dogs defensemen and tied the game up at three.

Logan Chisholm was sent off on a high-sticking call with 54 seconds remaining in the period and the Sea Dogs got a power play that they would carry into overtime. With 2:10 remaining in overtime, Yanic Crete was sent to the box for wearing his helmet incorrectly. The Sea Dogs killed the penalty and as Crete left the box he got a breakaway chance, but mishandled the puck and the buzzer went.

The Sea Dogs will return to Saint John to take on the Charlottetown Islanders at TD Station on Friday, October 29th in their Military Appreciation Night. Minor Hockey Team Packs are 50% off for Friday’s game, contact info@sjseadogs.com for more details.