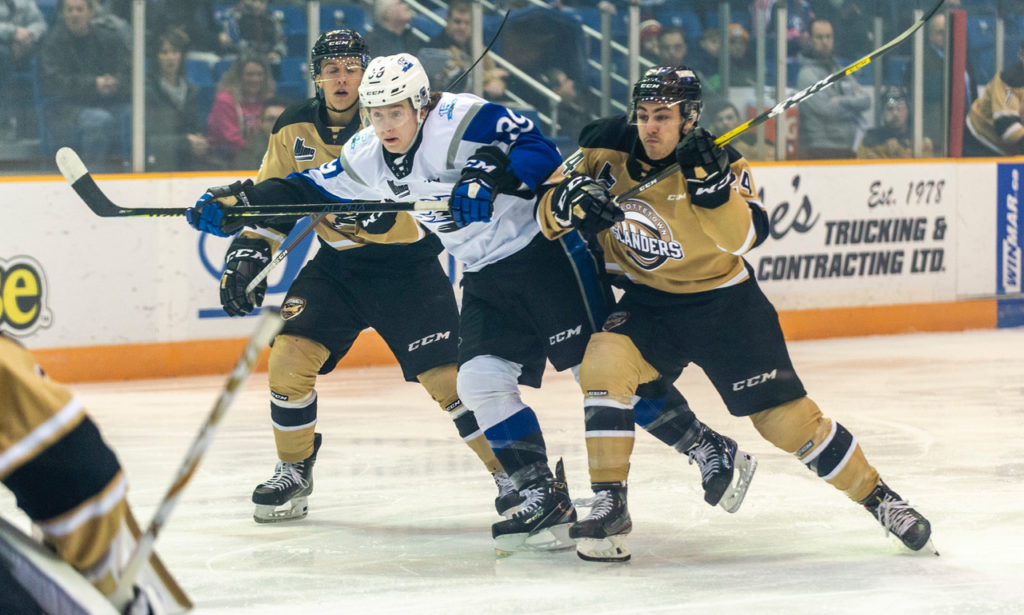 The rivalry between the Saint John Sea Dogs (22-23-1-0) and the Charlottetown Islanders (23-18-5-0) was on full display at TD Station from puck drop with two fights in the first period. Anderson MacDonald scored his first for his hometown Sea Dogs in the 2-1 loss on Friday.

Zachary Bouthillier got the start in net for the Sea Dogs stopping 27 of 29 shots. Matthew Welsh started for the Islanders, stopping 40 of the 41 shots the Sea Dogs sent his way.

The Islanders got the first power play of the game at 8:37 when Josh Lawrence was sent off for interference.

Matt Gould was sent to the box for high sticking shortly after the first penalty was killed. The Islanders scored on the power play when a shot from the point by Brendon Clavelle made its way through traffic and bounced in.

The Sea Dogs kept the pressure on in the Islanders zone and played an energetic style for the rest of the period.

Cole Edwards of Charlottetown sent the puck over Bouthillier’s shoulder, but the net was dislodged, sending the goal to review. After a quick deliberation, it was called a good goal and the Islanders took a two-goal lead at 18:17.

As the final buzzer for the period sounded, the second fight of the game broke out. This time it was Jeffrey Durocher and Drew Johnston, with Durocher receiving two minutes for instigating and a misconduct for unsportsmanlike conduct in addition to the fighting major.

Shots at the end of the first period were 15-7 for the Sea Dogs.

The Islanders began the second period on the power play because of Durocher’s instigator penalty, which was served by Brady Burns.

The Sea Dogs got their first power play opportunity of the game when Lukas Cormier was sent off at 8:02 for high sticking.

Jérémie Poirier was sent off for delay of game at 15:17.

Shots going into the final frame were 27-19 for the Sea Dogs.

The Sea Dogs got the man advantage when Anthony Hamel was sent off for slashing.  It didn’t take long for the power play to strike. Quispamsis native Anderson MacDonald scored his first as a Sea Dog, firing a rocket over the shoulder of Matthew Welsh and breaking the shutout at 8:38.

The Sea Dogs made one last push, pulling Bouthillier and calling a timeout, but were unable to tie the game.

The Sea Dogs will take to the road to begin their four-game Quebec road trip, beginning with a match up against Alexis Lafrenière and the Rimouski Océanic on Tuesday, January 28 at 730PM. Follow the action live at sjseadogs.com/live.

Jones Shines in OT Loss to Wildcats
4 days ago