MENU
In response to the suspension of the season by the QMJHL, the Sea Dogs office will be closed until further notice. Please see the below announcement re: existing tickets and flex vouchers. Please hold on to any unused tickets. For questions/information please contact info@saintjohnseadogs.com We thank you for your patience and understanding as we continue to work through this.
February 17, 2020

MACDONALD THE HERO WITH LATE GAME WINNER AGAINST FORMER TEAM 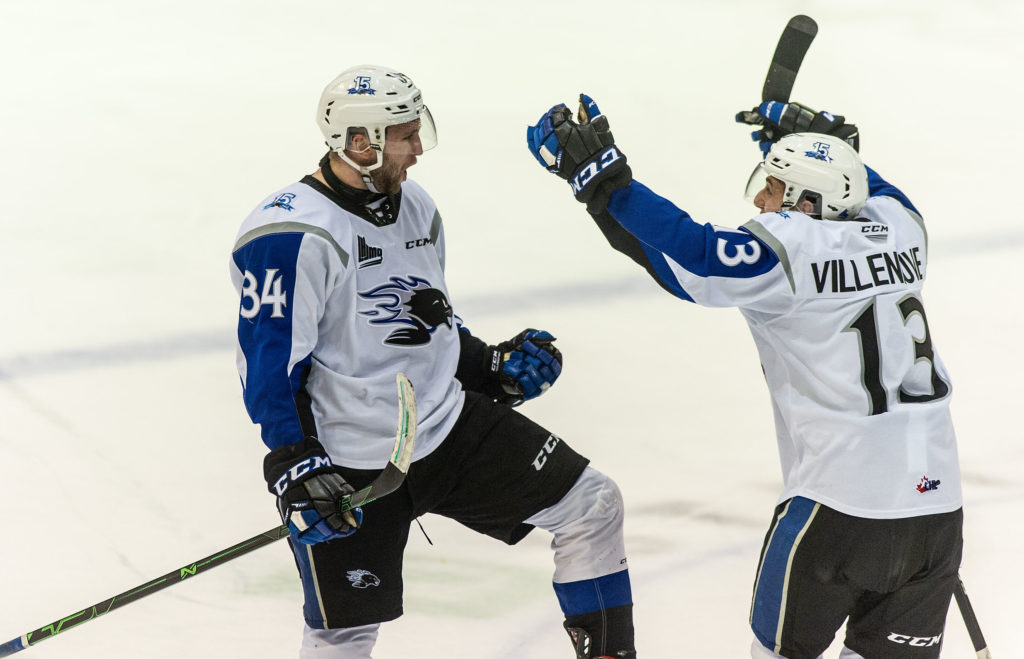 The Family Day matinee between the Saint John Sea Dogs (27-28-1-0) and the Acadie-Bathurst Titan (10-38-3-4) had an exciting finish as Anderson MacDonald kept the 5-4 win in regulation, scoring the game winning goal with 3.9 seconds left in the game.

Noah Patenaude got the start in net, stopping 34 of 38 shots in the exciting victory at TD Station on Monday afternoon.

Saint John opened the game with an early power play after Olivier Coulombe was sent to the box for high sticking 3:53 into the period. The Sea Dogs capitalized on the opportunity and Josh Lawrence found the back of the net less than a minute into the man advantage, bouncing the puck off a Bathurst defenceman and past the goaltender.

The Titan tied the game up at 6:31 when Mathieu Desgagnés tipped in a pass right in front into the net.

23 seconds later, Alexandre O’Neill made it 2-1 for the Dogs, picking up the loose puck in front of the net and firing it past the goaltender for his first goal in the QMJHL.

At 7:28, Kale McCallum was sent off for hooking.

The Titan went back on the penalty kill at 13:26 when Benjamin Roode was sent off for tripping and the Sea Dogs power play was successful for the second time of the night. Joshua Roy scored 20 seconds into the power play, firing a rocket past the goalie from in the slot.

Benjamin Roode was sent off for tripping again at 14:51. Just as the penalty ended, Mathieu Desgagnés scored his second of the night.

Shots after the first were 13-11 for Bathurst.

Ben Badalamenti received two minutes for handling the puck at 4:41.

At 13:51, Noah Delemont was sent off for hooking and the Sea Dogs power play was successful for the third time of the afternoon when Jeffrey Durocher redirected a pass from Maxim Cajkovic into the back of the net at 14:16.

Shots going into the final period were 26-24 for the Sea Dogs.

A high sticking call against Anderson MacDonald at 8:53 sent the Sea Dogs to the penalty kill. The Titan brought the score within one with a goal on the power play.

Brendan Sibley and Riley Kidney were sent off at 13:59 for unsportsmanlike conduct and play went to four-on-four.

The Titan called a timeout and pulled Tristan Bérubé with 2:08 remaining in the third period. They tied the game with 1:45 remaining.

Anderson MacDonald ripped the possibility of overtime away from the Titan with the game winning goal, a rocket over the shoulder of Bérubé, with only 3.9 seconds remaining.

The Sea Dogs will have a short break before hitting the road to take on the Eagles in Cape Breton on Friday, February 21. Puck drop is at 7PM, follow the action from home at sjseadogs.com/live.