MENU
In response to the suspension of the season by the QMJHL, the Sea Dogs office will be closed until further notice. Please see the below announcement re: existing tickets and flex vouchers. Please hold on to any unused tickets. For questions/information please contact info@saintjohnseadogs.com We thank you for your patience and understanding as we continue to work through this.
August 27, 2019 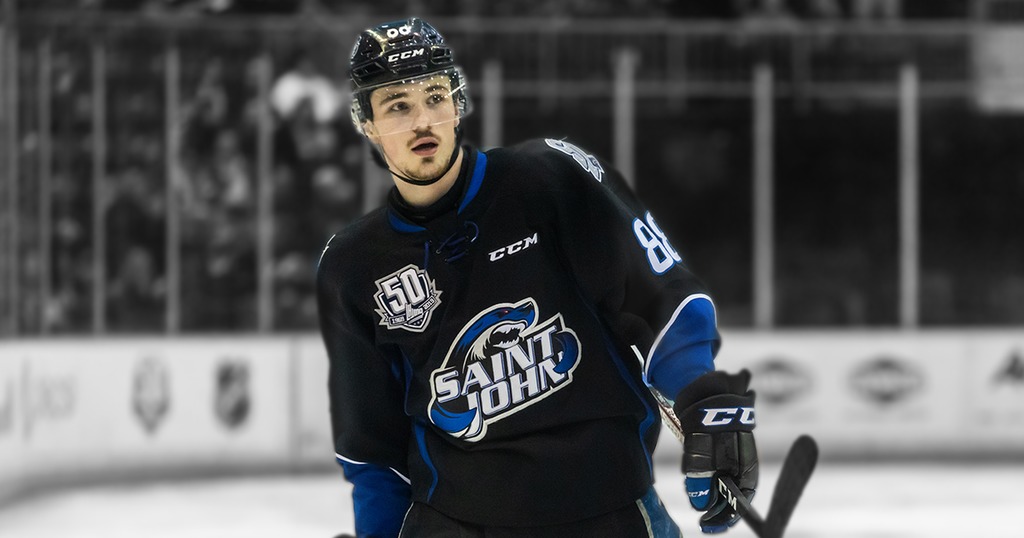 For Slovakian born Maxim Cajkovic that means 68 new chances to prove himself as an elite scorer at the junior level. The 2018-19 Season was a year of firsts for Max. More than just his first game or his first goal, it was his first time leaving his home country. That’s a hard ask for any 17-year-old, but now add on the pressures and rigors of your NHL draft year and your home country can seem even farther away.

“I would say I was a little nervous at the beginning of the season – it was a new team, a new country, new style of hockey, new league, new everything for me and plus the draft year – everything combined made me a little nervous.”

By almost every measure Max performed at or above expectations in his rookie season. He finished atop the Sea Dogs in goals and points and was fifth overall in league scoring by a rookie. Much of his on-ice success seemed to come in the later half of the season. After time with the Slovakian national team for World Junior selection camp in December, Max returned with a renewed sense of confidence in his game.

“In the second half I went to the world junior camp, met some good friends and got to speak Slovakian for the first time in awhile so I think that really helped me and just thinking back I knew that my first half wasn’t really good so I told myself that I need to step up and play a lot better.”

A quick trip home and time with friends helped Max ease back in for the second half of the season but there was still his draft day looming in the distance. He admits the magnitude and pressure got under his skin a few times during the season and negatively impacted his attitude and his focus.

“I knew that I had a big chance to get drafted, so I wasn’t nervous about not getting drafted. But I was nervous about my position or where I would go because I would look at different rankings. So, I knew where I was supposed to go and I was nervous about that like “what if that doesn’t work out?” and “what if it’s worse?”. I was focused only on me, but this year now I’m drafted and I’m happy with everything that happened—now I have nothing to lose.”

Max was selected in the third round of the 2019 NHL Draft 89th overall by the Tampa Bay Lightning. He recalls the days leading up as a slow grind to the finish line.

“I was at the National team camp three days before the draft, so I didn’t think about it as much. When I really started thinking about it was when I watched the first round on Friday—that’s when I kind of realized it’s here. I knew the next day was my day so I was really nervous. It was tough to fall asleep, and then I woke up really early, I couldn’t wait so I went for a run. I went to practice to  kill some time, and it went slower and slower every hour I was watching – oh four hours to go, three hours to go – and then the last hour seemed to take forever, but at the end of the day I’m really happy with my position and yeah, it felt really good.”

The Lightning shared Max’s eagerness to get started.

“Tampa called me right away after and they said they were really happy to draft me and that I’m a really great fit to the organization and that they’re looking forward to working together.”

Max attended the Lightning Development Camp in late June along with fellow recently drafted Lightning prospects. The next steps in his career were now clearer than ever.

“I saw a big difference and I saw why the NHL is the best league in the world. I spoke to coaches, they have so many coaches there and everyone had something to share they just tried to help you – I’m not saying it’s not like that here, but we have four coaches here and everyone’s trying to help you but there they had four coaches upstairs, four coaches on the ice, two skating coaches plus other staff- it was a big difference for me. A lot of good locker room guys who have some experience and that was big for me and I felt lucky to go.”

The Sea Dogs will have ten players eligible for the 2020 NHL Draft taking place in Montreal, QC in June of next year. Now back in Saint John, Max is equipped with experiences he plans to share with his teammates as they enter their draft year.

“I need to help the other guys now so our team gets better, so we can have more drafted players, so they can have more experience and then we’ll be ready for deep cup runs in the next few years. I want to help our 17-year-olds with their draft years and just be the best teammate I can be.”

The Slovakian sniper is already looking forward to the improvements everyone has made since last year and meeting some new faces before the start of the regular season.

Maxim Cajkovic, Joshua Roy and the rest of the Saint John Sea Dogs will open the regular season at home on September 20th.