MENU
In response to the suspension of the season by the QMJHL, the Sea Dogs office will be closed until further notice. Please see the below announcement re: existing tickets and flex vouchers. Please hold on to any unused tickets. For questions/information please contact info@saintjohnseadogs.com We thank you for your patience and understanding as we continue to work through this.
June 22, 2019 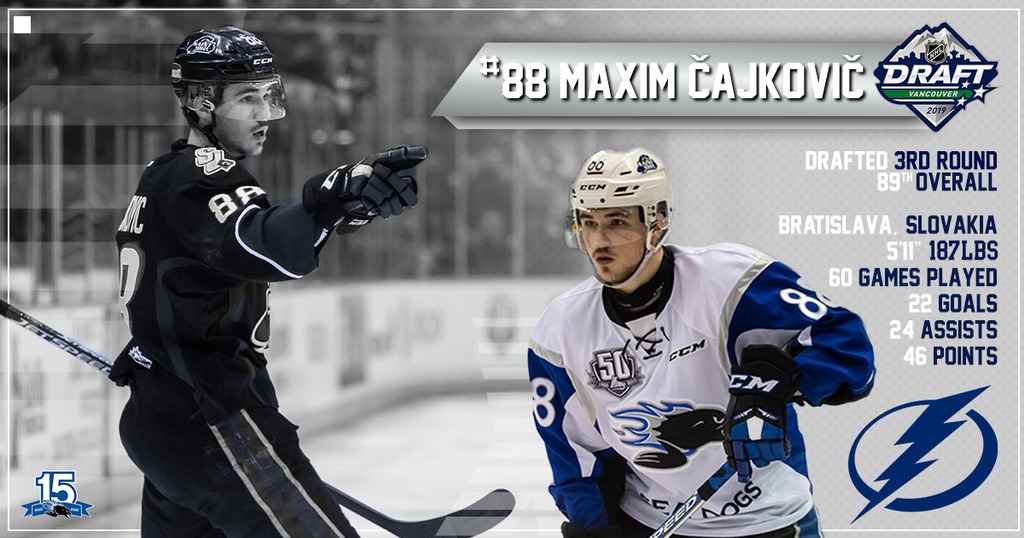 Saint John Sea Dogs forward Maxim Cajkovic was drafted to the Tampa Bay Lightning in the 3rd round 89th overall during Saturday’s NHL Draft in Vancouver, BC.

The 5’11” product of Bratislava, Slovakia played his first year in the QMJHL this past season leading the Sea Dogs in scoring. In 60 regular season games Maxim tallied 22 goals and 24 assists for 46 points. Cajkovic finished 5th in league rookie scoring.

“We’re so proud of Max getting drafted this weekend,” said Sea Dogs President & General Manager Trevor Georgie. “We know how much this means to him. With the pressures of his Draft year behind him now, he can move forward at Tampa Bay’s camps this summer and be ready for a big season back in Saint John. We have a great relationship with Tampa Bay strengthened by Sea Dogs alumni like Mathieu Joseph flourishing with the organization. A big thank you goes to Lightning General Manager Julien BriseBois and the entire Tampa Bay staff.”

Cajkovic is the 26th Sea Dog to be drafted into the NHL and the second ever Slovakian drafted from the Port City following Tomas Jurco being selected by the Detroit Red Wings in 2011.