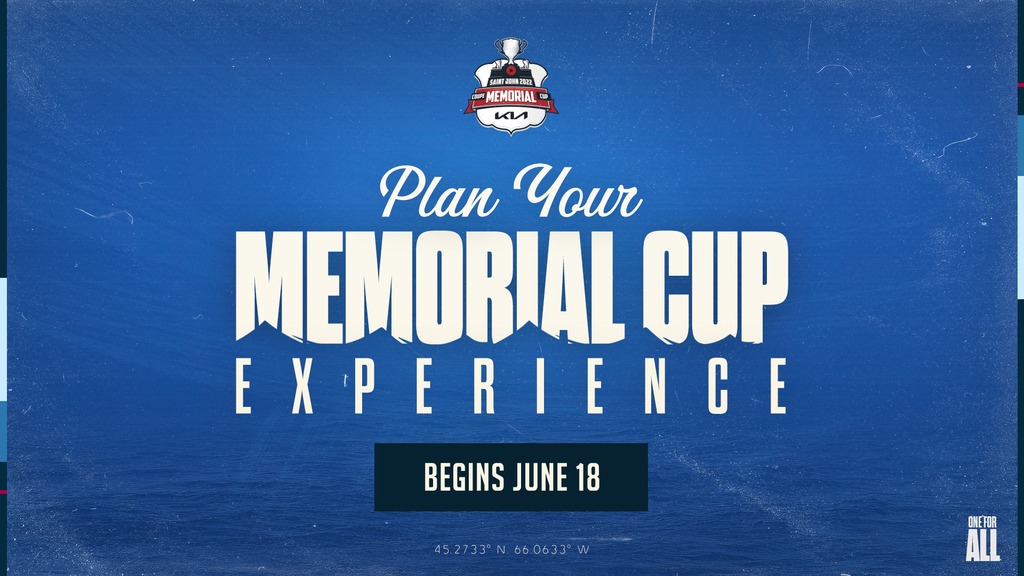 The Canadian Hockey League and the Host Organizing Committee today announced 12 key events that will highlight the 2022 Memorial Cup presented by Kia.

The excitement begins Saturday, June 18 with five events counting two community-based projects including a legacy mural near the host venue as well as a new, state-of-the-art ball hockey platform. A ball hockey tournament presented by J.D. Irving Ltd. spans the week as the first of six themed street parties dubbed the One for All District.

“One of the reasons why Saint John won the Memorial Cup bid was that they wanted to celebrate not just the best junior hockey players in the world but also to put on a world-class party,” said CHL President Dan MacKenzie. “We can’t wait to see how the community comes to life when an iconic event like the Memorial Cup comes to town.”

Continuing Saturday is an open-air concert at the new AREA 506 Waterfront Container Village dubbed the Port City Party – a concert featuring the Juno Award-winning band The Strumbellas. Memorial Cup pass holders will benefit from priority admission as space is limited. The night finishes off with a fireworks display presented by CIBC and Day & Ross.

“The action on the ice is only part of the plan,” said Mark-Anthony Ashfield, Host Organizing Committee Chairperson. “We set out to make this the best Memorial Cup event and our intention is to deliver that for the residents of New Brunswick and those that visit Saint John to take in the event.

“The One for All District not only allows us a platform to speak about our focus on diversity, equity, and inclusion, but it also gives us an opportunity to showcase the incredible architecture and uptown businesses within a short walk of the host venue.”

Continuing the celebration, Sunday begins with the Arrival of the Cup through a unique Uptown Rally event including a parade that will take the Memorial Cup from Long Wharf to the AREA 506 Waterfront Container Village. The action then heats up Monday with Fan Fest, Bash on the Bay, and Game 1 of the Memorial Cup.

Fan Fest takes place from Monday, June 20 to Wednesday, June 29 in Market Square including an exhibit from the Hockey Hall of Fame as well as the weeklong Speaker Series presented by Deloitte with speakers reflecting the One for All concept.

Bash on the Bay takes place at the AREA 506 Waterfront Container Village and will feature performances from talent from across Canada including Big Wreck, Alan Doyle, Classified, Matt Mays, and more. Performances are scheduled for either before or after game time, with games broadcasted on the big screen for sold out games. Memorial Cup pass holders will be offered priority admission as space is limited. General admission will be offered based on capacity.

Additionally, on-ice skills sessions have been organized and will be run by elite male and female leaders including past and present personalities from the CHL and NHL. Taking part throughout the week, registration is open until May 29 and will be first come, first serve.

Finally, Olympic medalist Curt Harnett will host a bike rodeo and community bike ride on Saturday, June 25. The public is encouraged to attend to learn new skills, decorate, and tune their bikes for this family-friendly event.

With a majority of tickets to the 2022 Memorial Cup presented by Kia already sold, fans who haven’t purchased are encouraged to act quickly online HERE, by telephone at 506-657-1234, and at the TD Station box office from 10 a.m. to 2 p.m. Monday to Friday. Full tournament ticket packages counting all eight games plus an if necessary tie-breaker game are available in two tiers priced at $390 and $460 plus applicable taxes and fees.

For more information on the 2022 Memorial Cup presented by Kia, visit chlmemorialcup.ca.