MENU
In response to the suspension of the season by the QMJHL, the Sea Dogs office will be closed until further notice. Please see the below announcement re: existing tickets and flex vouchers. Please hold on to any unused tickets. For questions/information please contact info@saintjohnseadogs.com We thank you for your patience and understanding as we continue to work through this.
August 23, 2019 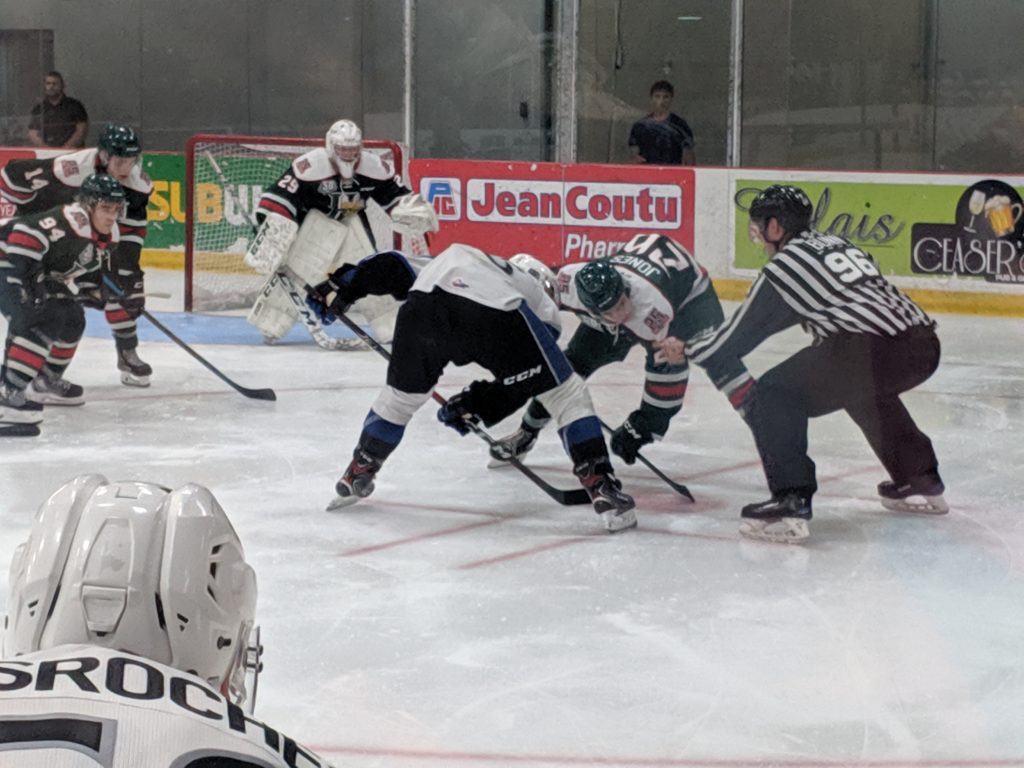 ST.STEPHEN – The Saint John Sea Dogs lost to the Halifax Mooseheads 4-2 on Friday night at the Garcelon Civic Centre in St. Stephen, NB. This was the second game in two days between the two clubs. Saint John now sits at 2-2-0-0 in the pre-season.

The pace from last night’s 4-3 Mooseheads win carried over into this one as both teams seemed to have an extra gear.

Nicolas Guay opened the scoring just 29 seconds in when he completed a tic-tac-toe sequence from Josh Lawrence and James White to give the Sea Dogs the early lead.

Julien Vander Voet was a human wrecking ball laying four heavy hits in the period. He’s had a good showing in camp as a free agent showcasing his grit and physical play.

Zachary Byard took the first penalty of the game, a slashing call at 10:37. During the Sea Dogs power play Sonny Kabatay would go off for tripping and Saint John would enjoy 29 seconds of 5-on-3. The Dogs had several chances during the two-man advantage but the score remained 1-0.

The Roy, MacIntosh, Jacob line was producing chances galore with first overall pick Joshua Roy providing some seeing eye passes in close. Caseley came up huge for the Mooseheads to keep them within one.

With just under two minutes to go in the frame Senna Peeters found a loose rebound and beat Bouthillier to tie the game at one a piece.

O’Neill and Dubé took penalties a minute apart as the period came to an end and the second would start with 4-on-4 play.

Seva Losev put the Mooseheads in front with a goal at 2:59 of the second. Samuel Dubé then scored on a Halifax power play on a one-timer in close from Marcel Barinka to make it 3-1 Mooseheads.

The two teams traded late period penalties and played a short sting of 4-on-4. Play was back and forth with Saint John bringing pressure from Josh Lawrence and James White. The scored remained 3-1 as they headed to the third.

Shots after two were tied 23 a piece.

Said Abi-Faycal made it 4-1 Halifax just two minutes into the third period. Saint John would reply with pressure eventually bringing it within two at 4:45 on a blast from Jeremie Poirier. Josh Lawrence added the assist.

With 3:45 to go in the game Zack Jones was called for holding behind the Mooseheads goal and Saint John went to the man advantage. 30 seconds into the power play Bouthillier left his net for the extra attacker.

Saint John threw everything they had at Pickrem who stood strong making several highlight reel saves late. Halifax would hold on for the the 4-2 win.

Saint John will take a short break before returning to action in Grand-Falls on Friday, September 6th to take on the Charlottetown Islanders at 7PM.