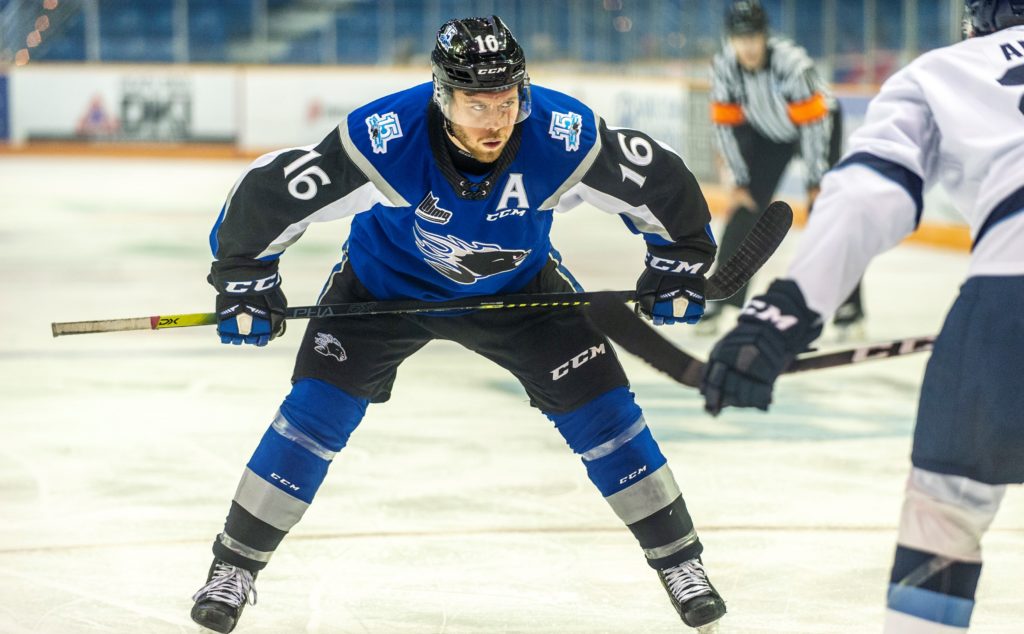 Ask his teammates and they’ll let you know, Nicholas Deakin-Poot is the unsung hero of the season so far.  The Brampton, ON native has shown off his physical style of play since he arrived in Saint John, blocking shots and laying big hits.  This year he’s scoring the big goals too.

He showed off his scoring touch and physical play during the first game of the Quebec road trip, against the Blainville-Boisbriand Armada.  With a hat trick, three hits, and eight stitches in his cheek, it was an eventful game that epitomizes what he has meant to the team this year.

“It was a big game, especially the first one off the road trip.  Came out pretty hot with the whole team.  The skate to the face didn’t feel too nice.  I didn’t really feel it right away, but I put my glove down on my face and I saw a whole bunch of blood so I said, ‘Alright let’s go off to the bench’, and then I found out that Olivier Desroches actually got a skate to the face on the same play.  He had his mouth bleeding while I was getting stitched up.  That was an interesting event there.”

With 11 goals and 11 assists a third of the way through the season, Deakin-Poot is on pace to pass his personal points records from last season.  Recently promoted to the top line, he says a large part of his success this year is because of his teammates.

“It’s nice to get those points. Obviously, my teammates have been a big part of that. [They’ve] helped me on the way, especially from last year. I’ve taken a big step. Honestly, I think it’s just the chemistry between the guys and me and how much they’ve been helping me.”

The feeling of appreciation is mutual, as several teammates have named him their unsung hero because of his willingness to block shots, dig in the corners, and the effort he puts in every game.

“I really appreciate that and thanks to anyone that has mentioned that,” said Deakin-Poot. “I’ve grown up always working hard. My work ethic has been one of the biggest things for me. I want to do the best for the team, and I feel like that’s the way I can do it.”

While he appreciates the praise, he has another player in mind when he thinks of the Sea Dogs unsung hero.

“I feel that Boots [Zachary Bouthillier] is actually the one who is the unsung hero.  He’s always in the net making those unbelievable saves. He faces 40-50 shots a night where he shouldn’t be but he’s definitely the one who is bailing us out night in and night out.”

Deakin-Poot is the longest-serving player on the Sea Dogs roster, having been with the team since the 2017-18 season when he played a shortened 18 game season due to injury, and he has seen a lot of change in his time in the Port City.

“The first year there were a lot of guys from previous years where they’ve had championship teams and where they’ve come from pasts like me where they didn’t play in playoffs. So, it was kind of a mismatch, but in the end, there was a tight bond there. Last year it was interesting, especially being the youngest team.  We knew it was going to be rough, but I found that the culture was good.  We had a strong head on our shoulders with the coaching staff and the management.  I think it’s just been building since then and I think you’re going to see a very strong team for the rest of the season and in the coming years.”

As one of the few 20-year-olds playing their final season in the CHL, this season is bittersweet.  Knowing that it is his last year of junior hockey, he is staying focused on the games and performing the best he can every night.

“It’s definitely an honour. Not many people can say, one, that they play in the CHL, but not many can say that they were 20 in the CHL.  So being able to be part of such a good organization and being a 20 for them is definitely an honour.  You think about it some nights, like, ‘We’re already a third of the way through my final year of junior’, and you kind of get a little choked up. Then at the same time you’re sitting there like, well let’s make the most of it, and you produce as much as you can. If that’s digging deep in the corners or if that’s putting pucks in the net, you do what you can do.”

Nick and the Sea Dogs return to home ice this weekend for a pair of games Saturday and Sunday. Purchase tickets at the TD Station Box Office or online.