MENU
In response to the suspension of the season by the QMJHL, the Sea Dogs office will be closed until further notice. Please see the below announcement re: existing tickets and flex vouchers. Please hold on to any unused tickets. For questions/information please contact info@saintjohnseadogs.com We thank you for your patience and understanding as we continue to work through this.
October 21, 2019 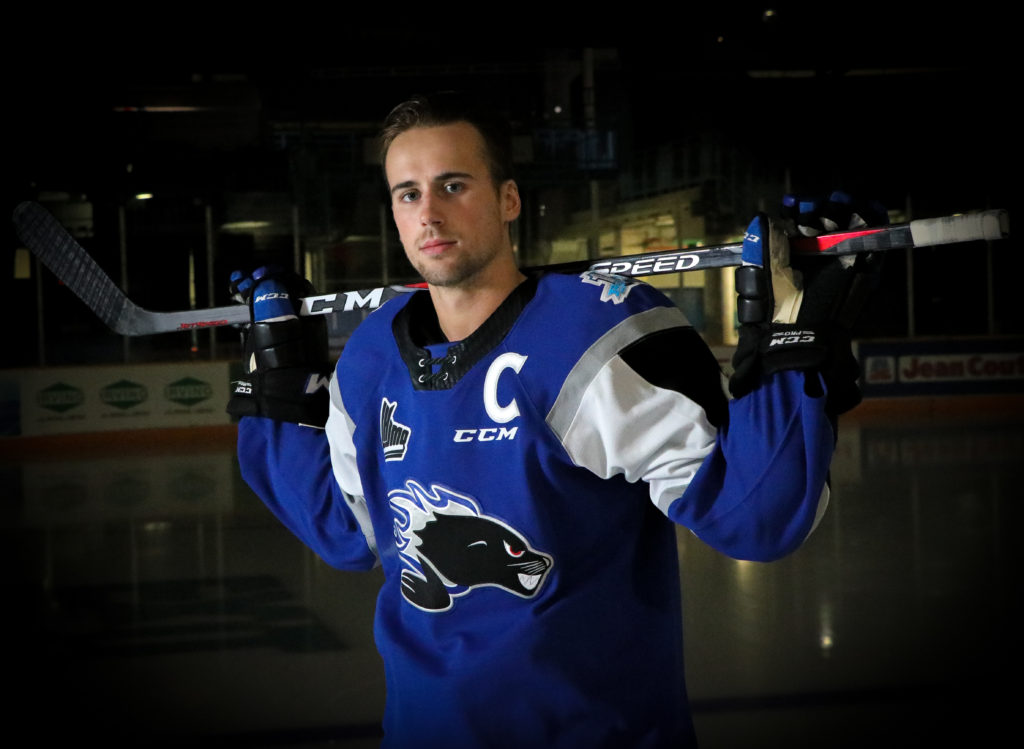 On a team full of draft eligible talent, the Saint John Sea Dogs added experience to a youthful roster when they traded to acquire Nicolas Guay from the Drummondville Voltigeurs this summer.  With 11 points in his first 11 games with the Dogs, his presence on the top line is being felt already. A captain in the QMJHL since the 2017-18 season, his leadership on and off the ice will be invaluable to the Sea Dogs this year.

Playing on the Voltigeurs last season, Guay racked up a career high 87 points in 64 regular season games and 10 points in their 16-game playoff run.  He was also able to learn about Saint John and the Sea Dogs organization from someone that experienced it firsthand, former Sea Dogs captain Joe Veleno.

“He [Veleno] of course loved it here.  He won the cup here and he was telling me how special it was even before I came here, how great of an organization it is and he just said some really good things. Luckily, I even ended up with his former billet and who are super nice people and I really feel at home here.”

The Drummondville Voltigeurs traded Guay after their quest for the President’s Cup was cut short last year, losing to the Halifax Mooseheads in the semi final round of the playoffs.  The trade was unexpected, but the veteran centre is looking forward to a new start in the port city.

“I wasn’t expecting to be traded, but apparently it was done since Christmas [laughs] so that was pretty surprising. Our run didn’t end the way I thought it would but it is a nice surprise to come here. As I said all summer long, I’d rather be with a young team that’s skilled and fast and offensive, you know that likes to score goals rather than a team with older guys who just play minimal roles so I’m thankful for that.”

“Of course, a childhood dream going there. Montreal Canadiens, it’s as big as people think it is you know it’s very special.  I don’t think I played the way I hoped, the way I trained all summer. I trained super hard so I would have expected myself to be better, but I always put high hopes on myself so maybe it wasn’t that bad after all. It’s a process you know. I’ve seen plenty of great twenty-year-olds sign professional contracts so that is my goal for sure.”

Though he did not leave camp with a contract, Guay, like his draft eligible teammates, is not focused on the scouts in the crowd this season.  He is dedicated to improving his game and hopeful that his hard work will pay off.

The Sea Dogs named Guay the captain in September and the 20-year-old is no stranger to leading a team.  He had worn the ‘C’ for the Voltigeurs for the last two seasons.  Comfortable in the role of captain, he leads by example.

“I think I’ve always been a leader on the teams I’ve been with whether I was a younger guy or now,” he says. “For me it’s just normal. I don’t push it. I don’t try to be Mark Messier and make the biggest speech in the room or whatever. If I need to, I’ll stand up and say something but if I don’t need to I won’t say nothing. Being a captain is knowing when to talk and when not talk. You need to be sharp all the time and that’s what I think I bring.  If you look at the gym I’m always the last guy in the gym either stretching or cooling down, when I come home I eat well, I drink my water, I sleep well, I take care of myself and that is just part of who I am.”

After a 2-2-0-0 start to the season, the captain spoke about starting to get a feel for his new team and line mates.

“You can’t base yourself off of four games, but still four games is a good way to see who is off to a good start and who is off to a slow start. I think me and Stairs had time to build somewhat of a chemistry in the couple games. I like his game and I like the way he plays. I think me and him are going to make some good things happen this year. A lot of other guys have impressed me starting with the goalie like Boots [Bouthillier] has just been incredible, he has been our best player so far and yeah, we need him in the net. It’s a learning process for us, we can’t get beat down after a loss we have to get better every day so that’s the focus.”

Guay can already see similarities between his new teammates and the Voltigeurs that finished second in the QMJHL and made a deep playoff run last year.  Because of the skill level of his fellow Sea Dogs he is optimistic, not just for the future of the team, but for the present.

“I think we have a similar group. We had young guys [Xavier] Simoneau, Dawson Mercer, kind of similar to guys we have here like Josh Roy, Dawson Stairs, guys like that who can step up, Josh Lawrence, Jérémie Poirier, William Villeneuve, just to name a few. I mean just such young guys but just such good players and good skill you know and there is something to do with those players already starting this year. I don’t think we have to wait two years to do something, we can do it right now.”