MENU
In response to the suspension of the season by the QMJHL, the Sea Dogs office will be closed until further notice. Please see the below announcement re: existing tickets and flex vouchers. Please hold on to any unused tickets. For questions/information please contact info@saintjohnseadogs.com We thank you for your patience and understanding as we continue to work through this.
March 1, 2020

PENALTIES A KILLER IN LOSS TO ISLANDERS 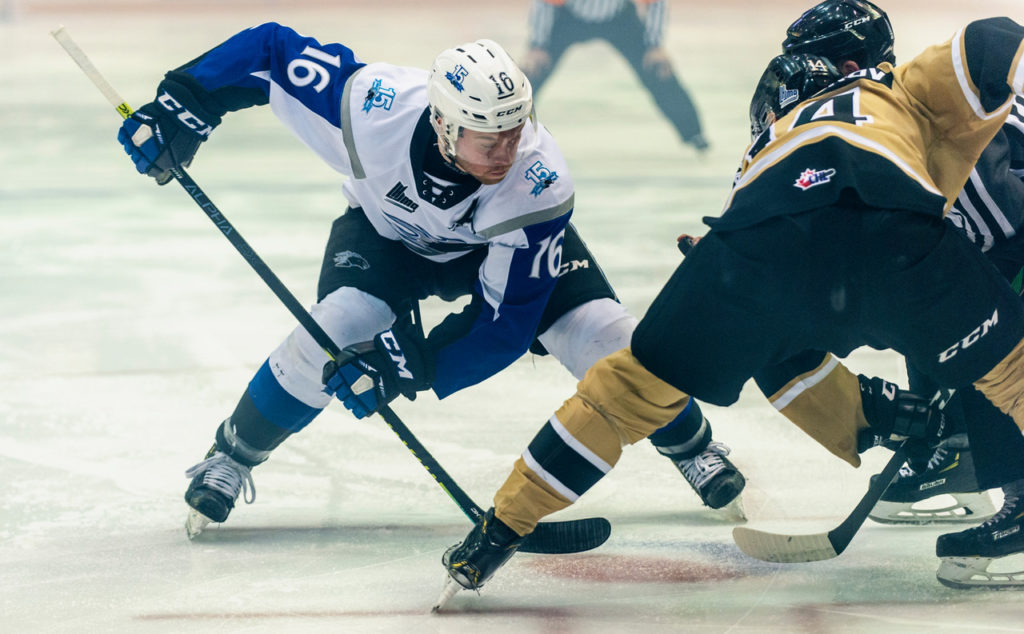 The Saint John Sea Dogs (30-30-1-0) fell to the Charlottetown Islanders (31-25-5-0) in their first of three straight meetings on Sunday afternoon. Noah Patenaude got the start in net, facing 49 shots and making 43 saves in the 6-2 loss at TD Station.

A goal from Cédric Desruisseaux opened the scoring, as he tucked it past Noah Patenaude’s foot and gave the Islanders the lead at 4:34.

Cédric Desruisseaux was sent off at 5:11 for slashing, giving the Sea Dogs the first power play of the afternoon.

Jordan Spadafore went tot the box for tripping at 13:07.  A delay of game penalty to Jérémie Poirier forced the Sea Dogs onto a five-on-three penalty kill for six seconds.

As Jordan Spadafore left the box, he received a pass at the blueline and the Sea Dogs got a shorthanded two-on-one chance.

Charlottetown increased their lead to two on the power play.

Late penalties to Charlottetown, Zachary Beauregard for tripping and Chris McQuaid for slashing, gave the Sea Dogs power play two more chances, in the final minutes of the period.

Shots after the first were 16-6 for the Islanders.

1:25 into the period, Jordan Spadafore went to the box for interference. The Sea Dogs successfully killed the penalty.

Gaetan Jobin increased the Islanders lead to three at 6:55.

William Villeneuve went to the box for tripping and Jordan Spadafore followed him soon after for cross-checking, sending the Sea Dogs to a five-on-three penalty kill for 1:14.  Noah Laaouan scored on the power play, making it 4-0 with a one timer.

Shots at the end of the second were 39-17 for the Islanders.

The Sea Dogs broke the shutout early in the third when Jeffrey Durocher picked up a bouncing puck in front of the net and hit it over the shoulder of Matthew Welsh 39 seconds into the period.

Jordan Spadafore was sent to the box for tripping. A passing play by the Islanders gave them a goal on the power play at 2:43.

Brendan Clavelle was sent of at 4:08 for hooking.

The Sea Dogs got four minutes on the power play after a double minor to Lukas Cormier for holding. The Sea Dogs called a time out.

Nicholas Deakin-Poot left the game after receiving two minutes for roughing and ten minutes for unsportsmanlike conduct at 11:24.

Play went to four-on-four and the Sea Dogs scored their second of the afternoon, Jérémie Poirier scored his 25th goal of the season, coming up the wing with speed and sending it over Matthew Welsh’s shoulder.

The Islanders responded quickly with a goal from Brett Budgell at 12:40.

The Sea Dogs got one last power play when Chris McQuaid was sent off for slashing at 17:34.

Final shots were 49-30 for the Islanders.

The Sea Dogs will hit the road to take on the Islanders again in Charlottetown on Thursday, March 5, in their first of three games in three nights. Puck drop is at 7PM, follow the action as it happens at sjseadogs.com/live.