Penalties the Killer in Shootout Loss to Cape Breton 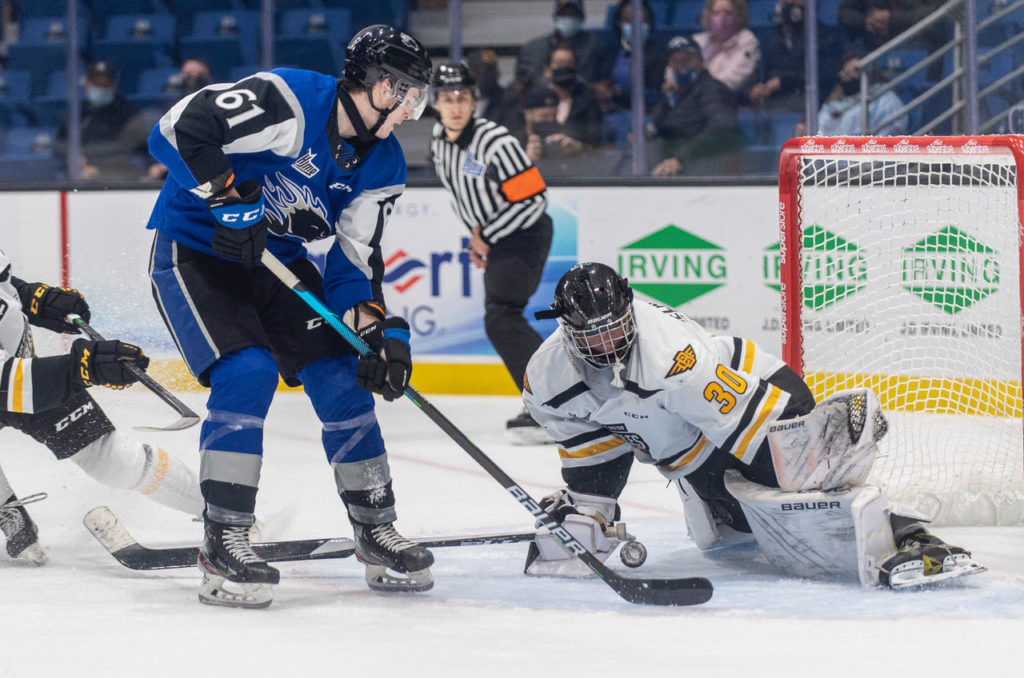 The Saint John Sea Dogs (1-3-0-2) fell to the Cape Breton Eagles (2-2-2-1) in their first meeting of the season Friday night. Penalties proved to be the killer in the first game in a back-to-back. The Sea Dogs were on the wrong side of 8 penalties and gave up two shorthanded goals in the 5-4 shootout loss.

William Dufour scored two goals for the Sea Dogs and was joined by Carter McCluskey and Cam MacDonald. Former Sea Dogs Nicholas Girouard and Dawson Stairs scored a goal each in their first return to TD Station. Connor Trenholm and Jérémy Langlois also hit the back of the net for Cape Breton.

Jonathan Lemieux got the start for Saint John, but was pulled at 17:06 after allowing 3 goals on 12 shots. Noah Patenaude replaced him in the net and made 23 saves for a .958 save percentage in his 47:54 of ice time. Rémi Delafontaine started in net for Cape Breton, facing 48 Sea Dogs shots and making 44 saves. 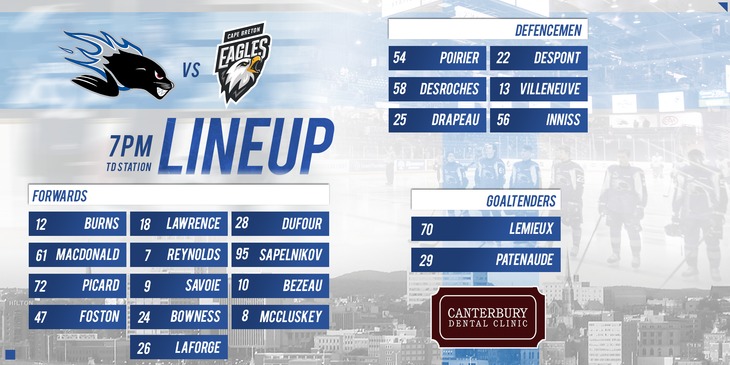 In his first return to TD Station, Nicholas Girouard had an exciting start with a penalty shot attempt with 12:03 remaining in the first period. The shot was stopped by Lemieux.

Girouard had a hand in the goal that would put Cape Breton ahead when he sent a cross crease pass to Connor Trenholm, who tapped it into the open side of the net at 11:12.

Soon after the Eagles opened the scoring, Adam Bowness was sent off for holding. Dawson Stairs scored on a delayed penalty call, making it 2-0. Bowness got out of the box and was replaced by Riley Bezeau on a cross checking call. The Sea Dogs killed the Bezeau penalty.

At 16:36, Peter Reynolds was sent off for tripping and Nicholas Girouard gave the Eagles a 3-0 lead on the power play. Noah Patenaude replaced Jonathan Lemieux in net after the third goal with 2:54 remaining in the first period.

William Dufour scored with 2:02 remaining in the first 3-1, extending his goal streak to four games. Brady Burns got the assist, passing the puck to Dufour in front of the Eagles net and extending his point streak to six games.

Shots after the first period were 13-11 for Cape Breton.

The Sea Dogs returned to the ice energized after the intermission. Only 24 seconds into the second period, Dufour scored his second of the night, picking up another pass from Burns and firing a quick snap shot past the Eagles netminder.

The rest of the period continued at a fast pace. The Eagles made it 4-2 at 11:10 with a goal from Jeremy Langlois, that Dawson Stairs picked up an assist on.

With 1:39 left in the period, a scramble in front of the Cape Breton net sent the game to a review, but the call was made and the score remained 4-2.

Carter McCluskey brought the team back within one with his second goal of the season.  Charles Savoie sent a net front pass behind the defenseman from his knees and McCluskey tapped it in 2:58 into the period.

At 4:30 Riley Bezeau was sent off for interference and at 11:31 Olivier Picard received a penalty for boarding.

The Sea Dogs tied the game up at 14:43. Peter Reynolds sped into the Eagles zone and fired a shot on net. Cam MacDonald picked up the rebound and sent it into the back of the net for the Sea Dogs fourth goal of the night. Following this goal, Cape Breton called a 30 second timeout to regroup.

Saint John killed one more penalty, a cross-checking call against Burns, and the third period ended in a tie.

Shots after the third period were 47-29 for Saint John.

Play went to a very exciting, high-energy overtime, but neither team was able to score. 1:44 into extra time, Charlie DesRoches was sent off for interference. The penalty was killed and play continued.

Overtime could not settle the draw and the Sea Dogs went to overtime for the second time this season. Dufour scored on his shootout attempt, but the other Sea Dogs shooters were stopped by Delafontaine. Stairs and Ivan Ivan made it past Patenaude and the Eagles won 5-4.

These two teams will be back in action at TD Station tomorrow night. Puck drop is at 7 PM and doors open at 6 PM. Tickets are available at the TD Station Box Office and online.