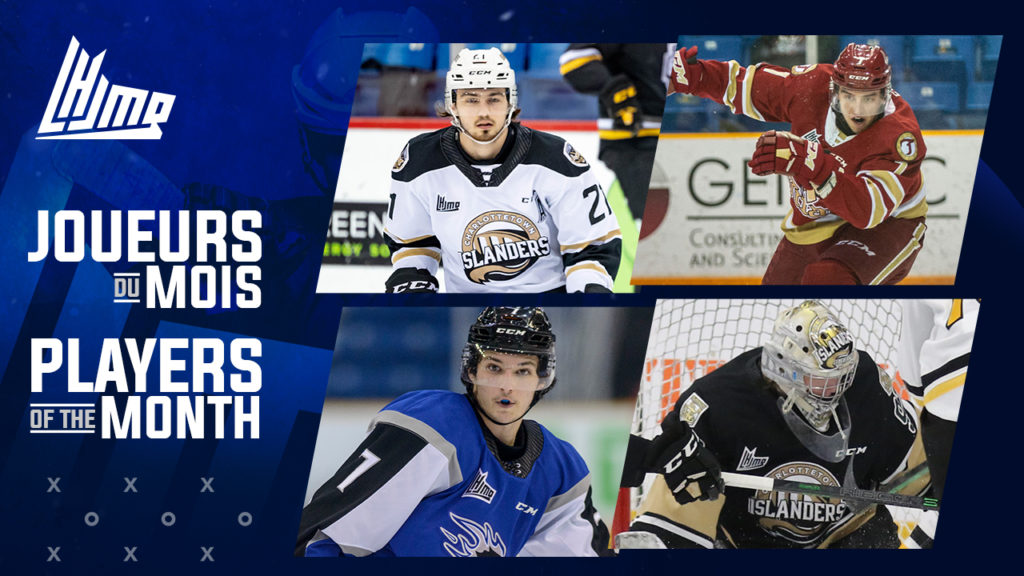 FORWARD OF THE MONTH

What a year it has been for Cedric Desruisseaux. The overaged winger recorded multiple points on five occasions in April, including a four-point night against Cape Breton on the 11th. When the dust settled on the regular season, Desruisseaux had not only recorded points in 25 straight games – a new Islanders franchise record – he had been held off the scoresheet just once in 42 outings this campaign! His fantastic play was key to the Islanders’ march to first overall in the QMJHL in 2020-21.

Desruisseaux completes his final season in the “Q” by capturing the scoring title with 42 goals and 78 points. He also reached career milestones with 100 goals and 200 points in his final regular season game.

By the time the horn sounded on the regular season, Desgagnes had set a new career best for points with 52. Riding a nine-game point streak into the playoffs, the fifth-year veteran enjoyed three four-point contests and sniped a pair of game-winners in April. Desgagnes also played a pivotal role in the Titan’s return to the postseason for the first time since 2018.

DEFENSEMAN OF THE MONTH

McCormick continued the style of play in April that earned him a Second Team All-Star berth last year. Posting points in eight of ten games, the 20-year-old from Woodstock, New Brunswick started the month with a bang, registering nine points in five games including a season high three assists on the 8th of April versus Saint John. During the month, he also recorded the 150th regular season point of his QMJHL career.

McCormick, an invitee to NHL training camp with the Dallas Stars in 2018, completed the season with 31 points in as many games. His seven goals tied a career best.

It’s no surprise to see accolades once again bestowed upon Cormier. After recording points in seven of eight April contests, the 2020 Vegas Golden Knights draftee concluded the campaign with a three-assist performance against Halifax on the 17th. This also padded his lead in the league’s defensemen scoring race, where he finished with 54 points in 39 games.

ROOKIE OF THE MONTH

A steady presence in his first tour of duty in the “Q”, Reynolds finished the year in style. On April 13th in Bathurst, the 18-year-old from Fredericton, New Brunswick pick up his first career hat trick to go along with two assists and a +6 rating. Not the be outdone, he added two goals and an assist against the Titan three nights later. Overall, the freshman turned on the jets after resumption of play in March with 23 points in 19 games.

A second-round selection by the Sea Dogs at the 2019 QMJHL Draft, Reynolds finished the year tied for second among all rookies in scoring with 31 points in 33 games.

Being a rookie goaltender with a rebuilding team in major junior is a daunting task. Vincent Fillion didn’t seem to mind too much, however. The former Trois-Rivieres Estacades star recorded back-to-back victories for the first time in his QMJHL career on April 11th and 17th against Saint John, allowing just four goals and making 55 saves in the process.

GOALTENDER OF THE MONTH

Colten Ellis’ record-breaking season rolled along as the 2020-21 regular season came to its conclusion. After setting a new benchmark for career shutouts last month, the overaged netminder capped off the campaign by setting a new record for lowest GAA in a single season with a sterling 1.78 mark. His final three games of the campaign, all victories, saw him steer aside 61 of 66 shots for the regular season champions.

Ellis, who signed an entry-level contract with the St. Louis Blues earlier this year, finished the season with an unbelievable 23-1-0-0 record. His .925% save percentage represents the fourth-best mark all-time in league history.

It took awhile to get him to Northern New Brunswick but Jan Bednar has made the most of his time with the Titan since. Three of his four victories saw the Czech netminder allow two goals or less. On April 14th and 16th, against Moncton and Saint John respectively, the second overall selection from the 2020 CHL Import Draft earned back-to-back victories for the first time in the QMJHL.