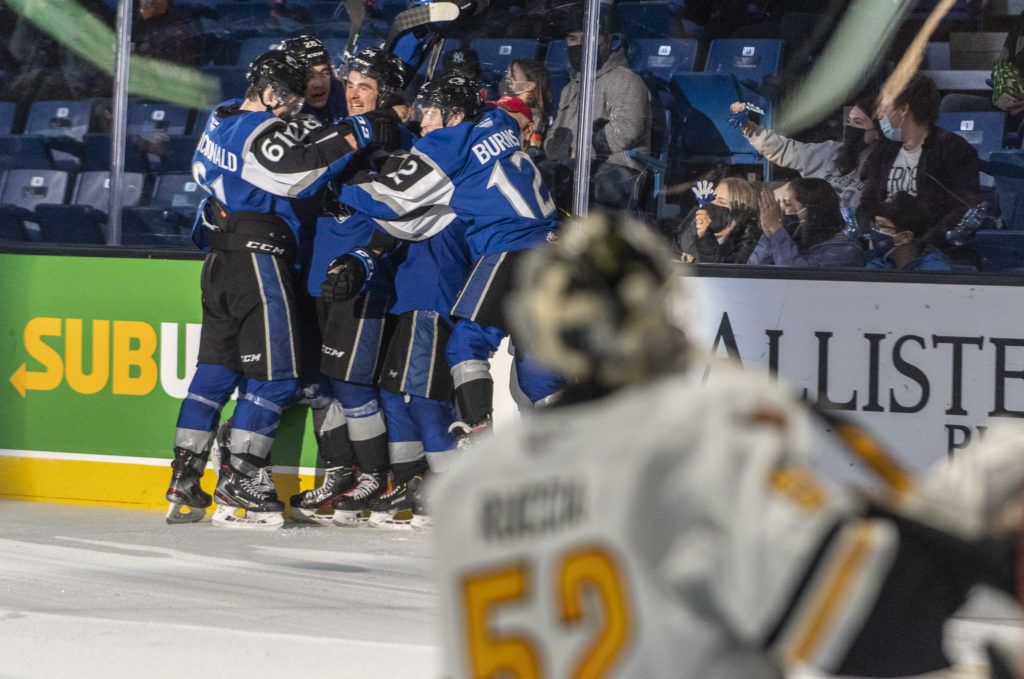 The Saint John Sea Dogs (2-3-0-2) defeated the Cape Breton Eagles (2-2-3-1) in overtime in their rematch on Saturday night. A hat trick from Jeremie Poirier led the way in the 4-3 win at TD Station. Peter Reynolds scored the overtime winner in the high intensity rematch from Friday night.

Noah Patenaude got the start in net for Saint John, making 28 saves on 31 shots. Nicolas Ruccia started for the Eagles stopping 29 of 33 Sea Dogs shots. 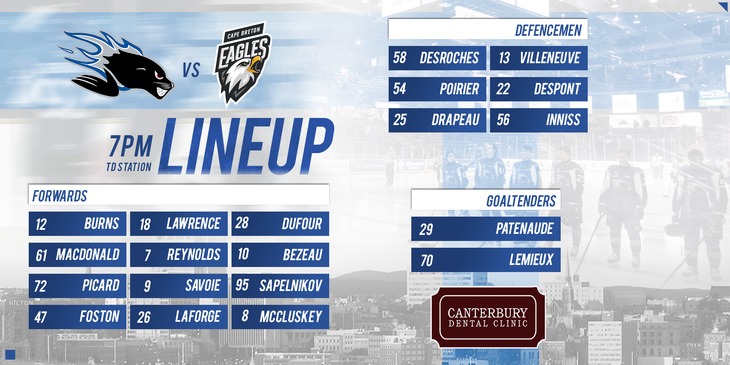 The Sea Dogs opened the scoring when defenseman Jeremie Poirier sped into the offensive zone, made his way past the opposing defensemen and fired a shot past the Eagles goaltender at 9:32.

Two minutes later, Poirier struck again, firing a shot from the slot to give Saint John a 2-0 lead.

The lead was cut to one at 13:32. Jack Campbell of the Eagles scored when a puck got through a crowded net and past Patenaude.

With 4 minutes remaining in the first period, William Dufour received a cross-checking penalty and the Sea Dogs penalty kill came out for the first time of the night, successfully killing the penalty.

Shots after the first were 13-10 for Cape Breton.

The Sea Dogs started the period with an early penalty kill when Nico Laforge was sent off for high sticking at 2:41.

Cape Breton tied the game up at two on a goal from Jeremy Langlois. A slashing penalty was called on Kiefer Lyons on the play and the Sea Dogs ended up on their first power play of the night at 11:13.

Saint John had another successful penalty kill after Vincent Despont was sent off for cross-checking with 5:10 remaining

Shots after the second frame were 22-18 for Cape Breton.

Cape Breton called a time out with 10:06 remaining in the third and took the lead 3-2 shortly after off a goal from Sean Larochelle.

A hooking penalty to Romain Rodzinski gave the Sea Dogs their second power play of the night, Brady Burns ripped a shot from the top of the circle and the play went to a review after it looked like it bounced off the crossbar. After the review, it was declared no goal and the Eagles kept their 3-2 lead.

Shortly after the  power play ended, the Sea Dogs kept the pressure on in the offensive zone and Jeremie Poirier completed his hat trick to tie the game.

The game went to overtime for the second time in as many nights and this time the Sea Dogs took the win, Peter Reynold rushed into the Eagles zone and flipped the puck over Ruccia for Saint John’s fourth and final goal of the night.

The Sea Dogs will be hosting the Acadie-Bathurst Titan this Wednesday, October 16th. Puck drop is at 7 PM and doors open at 6 PM. Tickets are available at the TD Station Box Office and online.