MENU
In response to the suspension of the season by the QMJHL, the Sea Dogs office will be closed until further notice. Please see the below announcement re: existing tickets and flex vouchers. Please hold on to any unused tickets. For questions/information please contact info@saintjohnseadogs.com We thank you for your patience and understanding as we continue to work through this.
January 28, 2020

POIRIER SCORES IN 3-2 LOSS TO RIMOUSKI 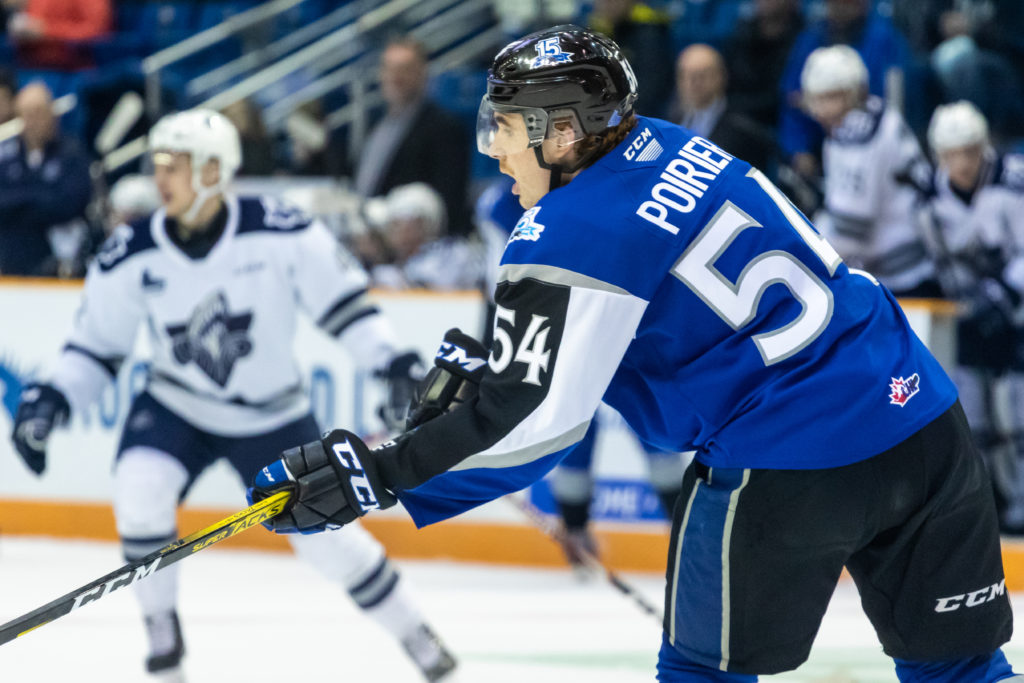 The Saint John Sea Dogs (22-25-1-0) lost to the Rimouski Oceanic (28-14-3-4) on Tuesday night by a score of 3-2. Jérémie Poirier scored to tie the game in the third period but the high powered Oceanic offence scored late to seal the game.

A scoreless first period saw the Sea Dogs kill off three penalties that kept Bouthillier quite busy. Rimouski fired 15 shots on goal while Saint John only managed two in return.

Matt Gould and Anthony D’Amours dropped the gloves behind the Rimouski goal six minutes into the game. D’Amours had a noticeable size advantage over Gould, but the Weymouth, MA native held his own.

Saint John looked to have regrouped during the intermission as they came out in the second period looking fresh.

Maxim Cajkovic broke in over the blue line at 3:59 and dazzled Jones with a deke to put the Sea Dogs up 1-0.

Saint John held the momentum for most of the period but Rimouski crept back with just over five minutes to go in the period. They notched two quick goals at 14:07 and at 15:30 on the power play, from Zachary Massicotte and Nathan Ouellet respectively.

Jérémie Poirier tied the game for Saint John four minutes into the third with his 15th of the year. The goal has him now tied with Alex Grant for most goals by a Sea Dogs defenceman in a single season. Poirier has plenty of runway left this season to surpass Grant with 20 games left on the schedule.

Three minutes after scoring the tying goal, Poirier took a scary hit from behind from Adam Raska and was tended to by team trainer, Jeff Kelly. Poirier was slow to get up but did remain in the game.

Saint John had chances galore during the ensuing power play but the game remained tied.

After serving his penalty, Raska scored the go ahead goal and eventual winner for Rimsouki at 10:30.

Saint John tried their best to tie the game late with Bouthillier out of the net but Rimouski held on for the win.

The road trip through Quebec rolls on with a stop in Quebec City Wednesday night to take on the Remparts at 8pm AST. Follow the game at sjseadogs.com/live