MENU
In response to the suspension of the season by the QMJHL, the Sea Dogs office will be closed until further notice. Please see the below announcement re: existing tickets and flex vouchers. Please hold on to any unused tickets. For questions/information please contact info@saintjohnseadogs.com We thank you for your patience and understanding as we continue to work through this.
November 12, 2019

POIRIER WITH FOUR POINTS IN 8-5 LOSS TO SHAWINIGAN 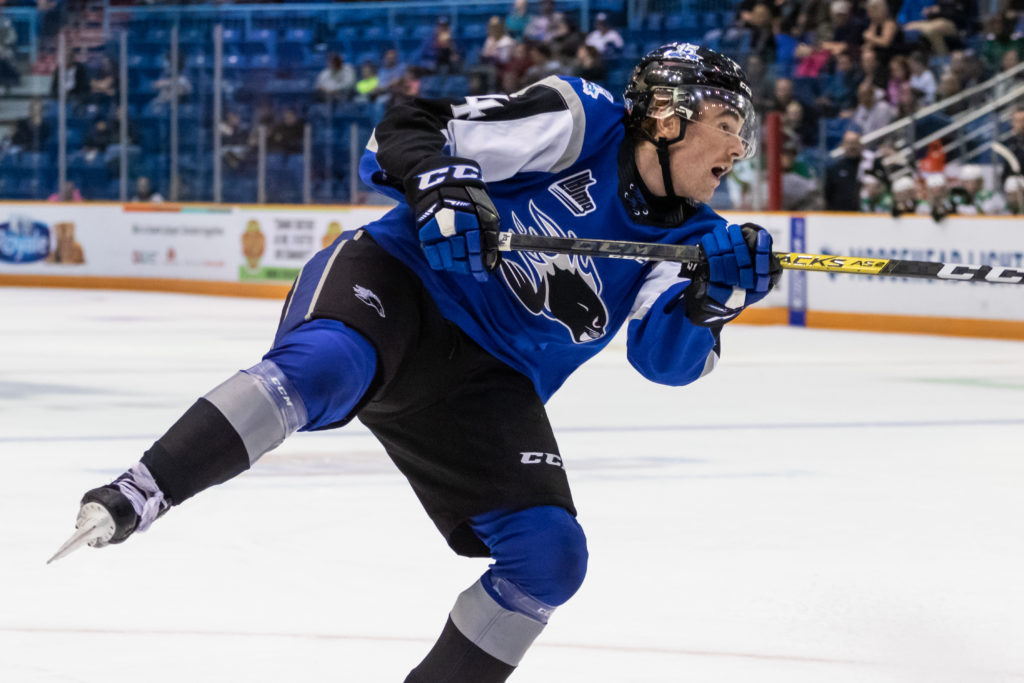 The winning streak stopped at three for the Saint John Sea Dogs who fell to the Shawinigan Cataractes 8-5 on Tuesday night at the Centre Gervais Auto. Early penalty trouble proved costly as the Cataractes seemed to stay just one step ahead all night. Defenceman Jérémie Poirier continues to find the back of the net, he finished the game with a goal and three assists.

Zachary Bouthillier returned in goal for the Sea Dogs after call up Tommy DaSilva recorded his first win in the QMJHL on Sunday evening in a 3-2 OT victory over the Victoriaville Tigres. Antoine Coulombe started for the Cataractes.

Shawinigan opened the scoring at 3:08 on the power play when Xavier Bourgault ripped a shot high glove side past Bouthillier.

The Sea Dogs responded with back-to-back even strength goals.

Alex Drover took a pass from Aiden MacIntosh and snapped home his first goal of the season to tie the game at 7:52. Just under four minutes later a three way passing play from the Sea Dogs top line saw Brady Burns score his 10th of the season to give Saint John the lead.

The Cataractes returned to the power play after Nicolas Guay was called for hooking at 12:12. A minute into the man advantage Gabriel Denis tied the game 2-2.

Matt Gould and Leon Denny dropped the gloves for a short affair at 16:13 in the Shawinigan Zone, both received five minute majors for fighting.

Saint John had heavy pressure down the stretch of the opening period and peppered Coulombe for 14 shots but the game stayed at 2-2 as they headed for the second period.

The Cataractes power play struck again when Xavier Bourgault scored at 5:56 of the second after Deakin-Poot was called for slashing.

Three minutes later Shawinigan increased the lead to two on a goal from Mikael Robidoux.

Nicholas Deakin-Poot got the Sea Dogs back in the game when he found the back of the net for his 11th of the season to make it 4-3. MacIntosh had an assist on the goal, his second of the game.

Just as the Sea Dogs seemed to be gaining momentum and inching towards tying the game, Olivier Nadeau scored for Shawinigan at 17:42 and sent the game into the third period 5-3.

Five minutes into the third period and the Cataractes were called for their first penalty of the game, a hooking call on Gabriel Belley-Pelletier. Saint John wasted no time capitalizing as Maxim Cajkovic let a howitzer go from the hash marks for his second of the season to bring the Sea Dogs back within one. Poirier and Burns had the helpers on the play.

The back and forth continued as Shawinigan extended the lead yet again on a goal from Charles Beaudoin at 9:23.

This sparked tensions as Jordan Spadafore and Mikhail Robidoux squared up behind the Sea Dogs’ goal but the linesmen were quick to interject and both players received roughing minors.

The Sea Dogs returned to the power play after Mavrik Bourque was called for holding and the Cataractes received a too many players bench minor a minute apart. Jérémie Poirier scored his league leading for a defenceman eighth of the year with a rocket shot from the right side to bring Saint John back within one.

Less than a minute later Bourgault knocked a puck out of the air and into the back of the net for the hat trick. Shawinigan added an empty net goal at 19:42. The final 8-5.

Bouthillier had 34 saves for saves for Saint John, Coulombe finished with 30.

The road trip rolls on as the Sea Dogs head to Val-d’Or on Thursday night to take on the Foreurs at 8PM. This is the first meeting of the two teams since the October 11th game at TD Station that saw Peyton Hoyt suspended for seven games after a hit on Sea Dogs defenceman Kale McCallum.