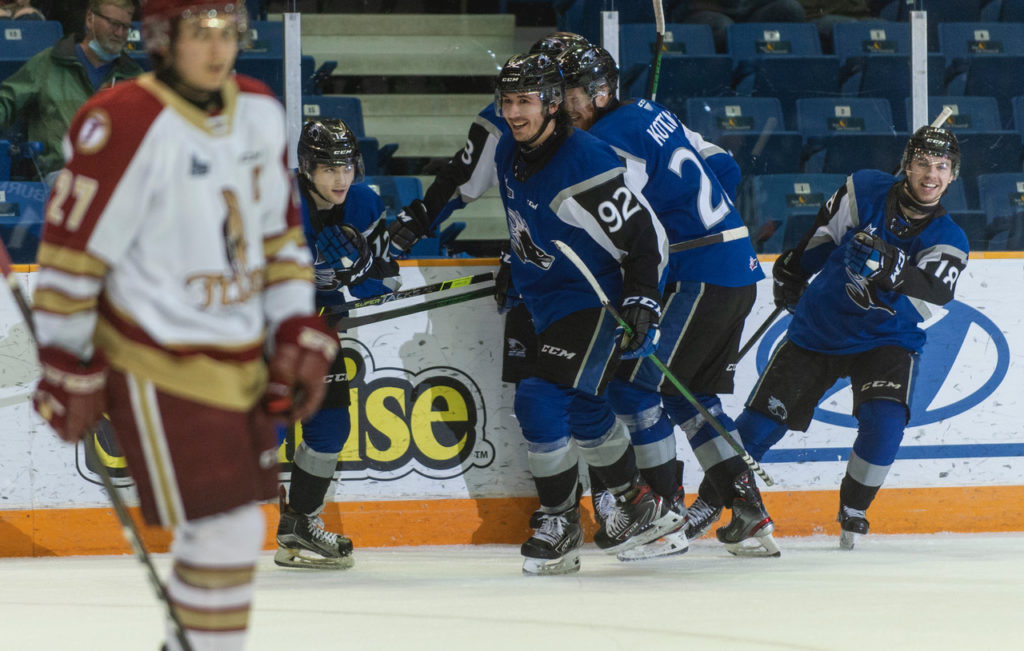 It was a rare Sunday evening game for the Saint John Sea Dogs (2-2) as they took on the Acadie-Bathurst Titan (2-1) in a critical matchup at TD Station. Their fourth game of the round robin, it was a must win for the port city team and they delivered for their home crowd. With goals from Josh Lawrence, Zachary Alchorn, Cam MacDonald, Nicholas Girouard, and a two-goal performance from Brady Burns, the Sea Dogs brought the intensity early and kept their energy up, maintaining pressure on the Titan for all three periods in the 6-2 win.

Zachary Emond got his fourth straight start of the playoffs, making 23 saves on the night. Chad Arsenault started in net for the Titan stopping 24 Sea Dogs shots. 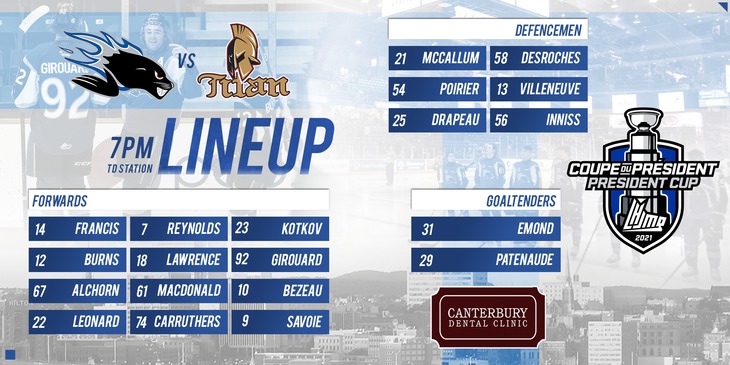 With big hits and big scoring opportunities at both ends of the ice, the animosity between the two teams, who have gotten to know each other well in their 12 meetings during regular season, was obvious from the first puck drop.

The Sea Dogs went on the penalty kill early, when Vladislav Kotkov was sent off for holding. Nicholas Girouard stole the puck at the defensive blue line and skated his way to a breakaway, which pinged off the crossbar and out.

After keeping the Titan scoreless on their power play, play went to 4-on-4 as Charlie DesRoches and Jacob Melanson received two minutes each for roughing.

A hit against Leighton Carruthers in front of the benches midway through the period led to shoving behind the Titan net. Bennett MacArthur received five minutes and a game misconduct for checking from behind and Liam Leonard sat two minutes for cross-checking during the resulting scrum.

A missed pass in the offensive zone allowed the Titan to cash in on a shorthanded breakaway, breaking the scoreless tie at 13:10.

The lead didn’t last long, Josh Lawrence fired at the crowd in front of the Titan net from a sharp angle and the puck found its way through 43 seconds later.

Shots after the first were 7-6 for the Titan.

The Sea Dogs continued to bring the energy and kicked off the second period with a quick goal from Zach Alchorn, firing a wrist shot past the Arsenault 14 seconds after the puck dropped.

The game was tied up again at 5:27 with a goal from Titan captain Mathieu Desgagnés.

It looked as if Brady Burns reclaimed the lead for the Sea Dogs, sliding the puck between a defender’s legs and sending a wrist shot from the blue line through traffic, making it 3-2, but after a long review the play was deemed offside and the game remained tied.

A penalty to Lane Hinkley gave the Sea Dogs a late period power play, which Cam MacDonald capitalized on. Picking up a pass from Ryan Francis and sliding the puck five-hole on Arsenault he gave the Sea Dogs the lead, for real this time.

Jacob Melanson received five minutes and a game for checking to the head on a hit against Nathan Drapeau at 19:50. Cole Huckins was sent off for slashing and Riley Bezeau received two minutes for roughing. With 10 seconds remaining in the period, the Sea Dogs sent a flurry of shots at the Titan net and an absolute buzzer beater of a goal from Brady Burns made its way to the back of the net. After a quick review it was deemed good and Saint John went into the third period up 4-2.

Shots after the second were 18-15 for Saint John.

The Sea Dogs started the third period with 4:50 of power play and they kept the pressure in the Titan zone. This paid off when Nicholas Girouard tipped a shot from Brady Burns at 3:18, sending a bouncing puck over the shoulder of Arsenault.

A couple of successful penalty kills after Ryan Francis was sent to the box for interference at 5:55 and Christopher Inniss was sent off at 8:29 for hooking maintained the 5-2 lead for Saint John.

Brady Burns sealed the deal on the win with his second of the night with 3:30 remaining in the third period, picking off a pass at the blue line and firing a wrist shot past the Titan goaltender.

The Sea Dogs remaining two round-robin games will be played on the road. Friday April 30, they will take on the Titan in Bathurst at 7 PM and Sunday May 2, they will head to Moncton to finish out the round-robin with an afternoon game at 4 PM. Catch both games on Sea Dogs Radio Presented by TD on CFBC 930AM and on Rogers TV.