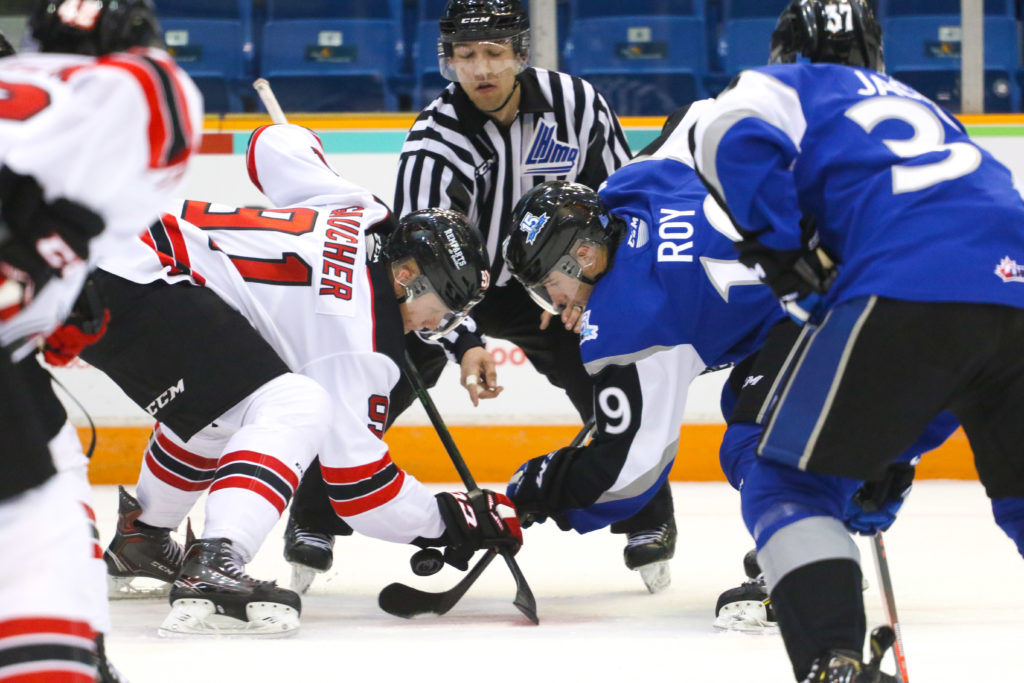 With 17 penalties and 12 goals across both teams, the special teams proved important for the second game in a row at TD Station as the Saint John Sea Dogs (3-3-0-0) took on the Québec Remparts (4-2-0-0) on Sunday afternoon.  The Remparts took the high scoring and physical game 7-5 over the Sea Dogs handing them their first home loss of the year.

Maxim Cajkovic (lower body) and James White (suspension) did not dress for the Sea Dogs.

Noah Patenaude got the start in net for the Sea Dogs, his first home game for the team.

Québec opened the scoring at 15:39 after Colton O’Brien caught the puck at the blueline on a failed zone exit by the Dogs.

Special teams got their first test when Remparts centre Nathan Gaucher was given a slashing penalty at 13:38.

Saint John took two quick penalties, Patrick Musico at 9:29 for high sticking and William Villeneuve for delay of game at 8:02, giving Québec the 5-on-3 advantage for 33 seconds.  The Sea Dogs penalty kill kept the puck out of the net and the score remained 1-0 Remparts.

The Sea Dogs power play came out again after a Remparts penalty at 5:57, Thomas Caron for holding.  Captain Nicolas Guay evened the score 24 seconds into the man advantage, scoring off a pass from Brady Burns.

A flurry of action in front of the Sea Dogs net culminated in Québec’s Gauche scoring his first QMJHL goal and putting the Remparts up 2-1.

Nicholas Deakin-Poot opened the second period with two quick goals, tipping in Charlie Desroches’ shot from the blueline at 16:32 and firing a rebound off of a shot by Matt Gould at 14:55 past the Remparts goalie, scoring for the third straight game and giving the Sea Dogs their first lead of the game. Deakin-Poot now has points in his last five games, a career high.

The Remparts responded with a quick goal of their own.  Rookie James Malatesta tapped in a pass from Andrew Coxhead in front of the net and tied the game back up at three.

Ben Badalamenti was sent to the box at 13:31 and Remparts defenceman Darien Kielb joined him a minute later after crosschecking Nicolas Guay on a shorthanded attempt.  The teams played 4-on-4 hockey for the next 1:08, but neither scored.

Remparts’ Thomas Caron went to the box for delay of game, giving the Sea Dogs power play another opportunity, but they were unable convert.

Caron was sent to the box again at 12:34 when he and Deakin-Poot received matching slashing penalties and the teams played 4-on-4 for the second time of the afternoon. Jérémie Poirier took advantage of the open ice and gave the Sea Dogs the lead once again.

Sea Dogs rookie Joshua Roy was sent off for hooking at 10:39. The Remparts took advantage of the power play, Darien Kielb sending a rocket from the blueline and tying the score up at four.

The physicality increased in the second half of the final period, including a play that sent two players from each team to the box.  Coxhead and Stairs were sent off for roughing, while Dylan Schives and Ben Badalamenti received penalties for unsportsmanlike conduct.

Brady Burns scored the Sea Dogs fifth goal, giving them a brief lead as Kielb scored his second of the game and tied it up moments later.

Kielb completed his hat trick at 4:34, making the score 6-5 Remparts.

Schives received a roughing penalty at 3:37 and Saint John’s power play went to work again. Sea Dogs rookie goaltender Noah Patenaude played the puck outside of the trapezoid, giving Saint John a penalty and returning play to 4-on-4 for the third time.

Felix Bibeau slid one past Patenaude on the power play and increasing the Remparts’ lead to 7-5.

Saint John will return to action on Thursday night as they head to Halifax to take on the Mooseheads at 7PM.