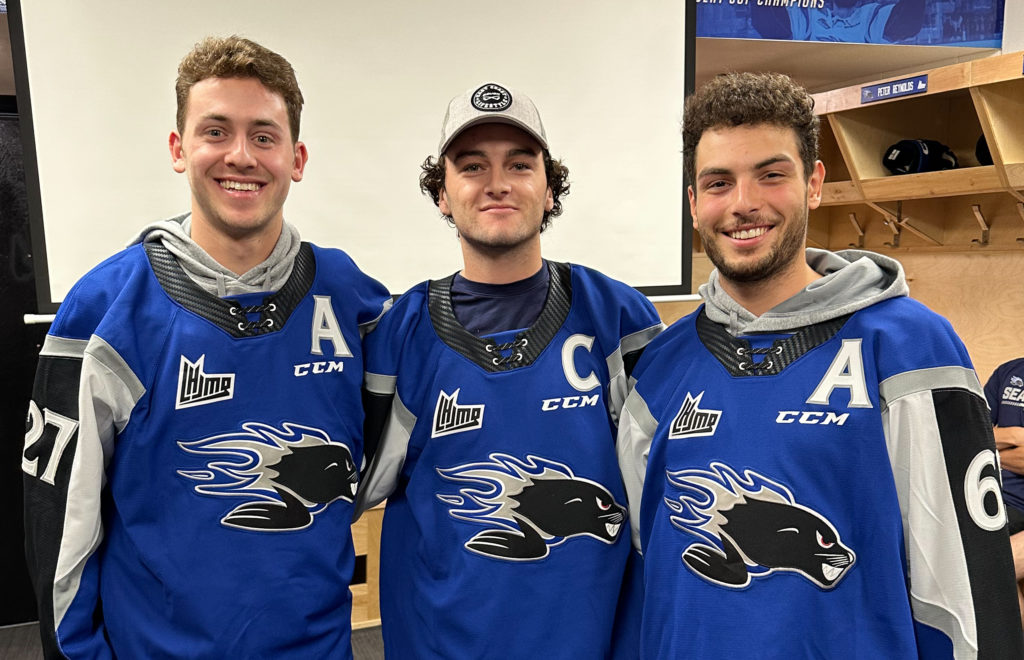 Connor Trenholm, Charlie DesRoches, and Marshall Lessard wearing their jerseys with letters. (Cam MacDonald is currently at camp with the Tampa Bay Lightning).

The 20-year-old veteran is entering his fifth season with the Port City team. Drafted 32nd overall in the 2018 QMJHL Draft, the 5’10” 178 lbs defenceman from Summerside, PEI has played 223 games in a Sea Dogs uniform.

Last season, DesRoches provided a steady presence on the Sea Dogs blueline, ending with him hoisting the Memorial Cup as a member of the host team. This summer, he was invited to the Carolina Hurricanes’ training camp, after attending Buffalo Sabres’ training camp last season.

“I’m very excited to receive the captaincy from the Sea Dogs,” said DesRoches. “It’s been an honour to play for this organization that has given me so much. I would like to thank my teammates, staff, and fans, for all their support, as we look forward towards this hockey season.”

Joining DesRoches in the leadership group are veterans Cam MacDonald, Connor Trenholm, and Marshall Lessard who will be sporting ‘A’s on their jerseys this season.

MacDonald, a third round pick in the 2019 QMJHL Draft, and a fifth round pick in the 2021 NHL Draft (Tampa Bay) has played with the Sea Dogs for the past two seasons. The 19-year-old left wing from Hammonds Plains, NS has suited up for 97 QMJHL games, netting 51 points in that time.

Trenholm, 19, was acquired from Cape Breton at the trade deadline last season, where he was an assistant captain. Drafted 48th overall by the Eagles in the 2019 QMJHL Draft, he played two and a half seasons in Cape Breton before joining the Sea Dogs. Trenholm has played in 154 regular season QMJHL games and has scored 19 goals and 33 assists for 52 points in his career.

Lessard, 20, from Sherbrooke, QC, has 136 regular season QMJHL games under his belt. Acquired from Val d’Or at the trade deadline last season, Lessard is a gritty sniper with playoff experience, including going to the 2021 President Cup Final with the Foreurs, before winning the Memorial Cup with Saint John this summer. Drafted 16th overall in the 2018 QMJHL Draft, Lessard has 43 goals and 40 assists, for 83 career regular season points.

“When considering leadership I am often reminded of a quote from the book Captain Class” said Sea Dogs Head Coach Travis Crickard. “That is “the most crucial ingredient in a team that achieves and sustains historic greatness is the character of the player who leads it.” We followed a three step process to select captains who embody the character traits of leaders, our team’s values, and are trusted by their teammates. As a result, we are delighted to name Charlie, Cam, Marshall, and Connor as the captains of the 2022-2023 Saint John Sea Dogs.”