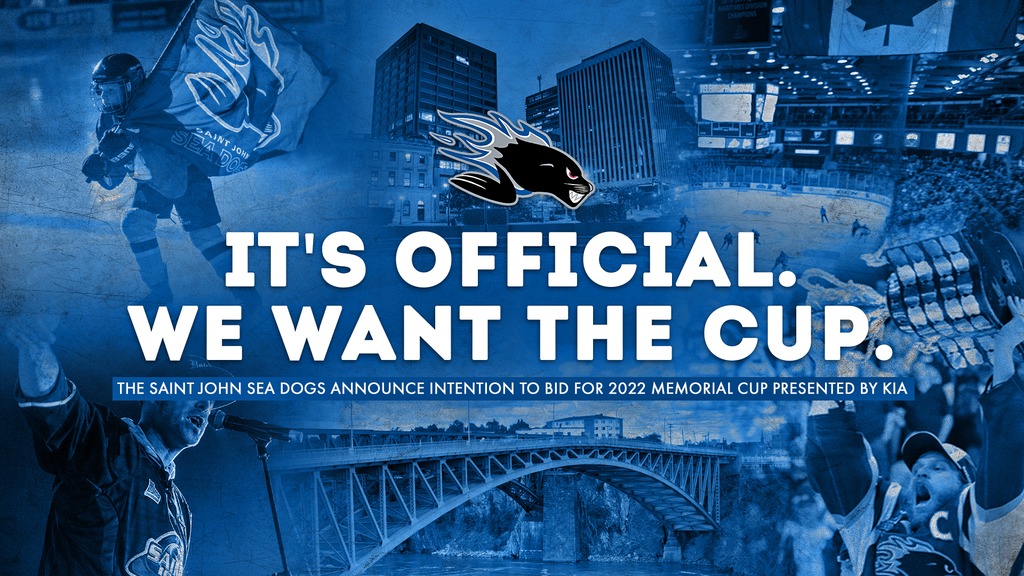 The Saint John Sea Dogs organization has announced their intention to bid for the right to host the 102nd edition of the Memorial Cup presented by Kia in 2022.

The Memorial Cup, one of the most prestigious and coveted trophies in North American sport, has a rich tradition that has shaped the way junior hockey is played in North America.

In 2011 the Saint John Sea Dogs became the first Maritimes based team in the Canadian Hockey League to be crowned Memorial Cup Champions, now Saint John will look to host the tournament for the first time in the organization’s 17-year history.

“It has been my goal since founding this franchise in 2005 to host the Memorial Cup tournament right here where I grew up, in New Brunswick,” said Sea Dogs CEO & Owner, Scott McCain. “The legacy of the Memorial Cup and its significance in paying tribute to fallen Canadian Military Personnel is deeply important to the organization. Our team, our community and most importantly our fans have waited for the opportunity to host this historic event and now is the time to showcase what makes Saint John so special.”

The Sea Dogs will work in partnership with the Province of New Brunswick, City of Saint John and TD Station to complete the bid process and bring the 10-day tournament to Saint John.

“Speaking with past host cities of the Memorial Cup, they estimated that the 10-day tournament generated one million dollars per day in economic impact. Winning this bid is important on so many levels. It isn’t the Sea Dogs bid, it’s the region’s bid. It’s a bid for Saint John and for the province of New Brunswick. It’s going to be a collaborative effort across the entire community and an opportunity for us to reintroduce and showcase our region to the world, post-pandemic,” explained Sea Dogs President & General Manager, Trevor Georgie. “We are a hockey community, a resilient community, a hard-working community, and a vibrant community. We are ready to put on a world-class event and welcome the 59 other communities from across the CHL and the entire hockey world to our home.  On the ice, we have a mature and talented roster, among the best in the league next season, and every single player is excited to prove that we’re ready to host and hoist a Memorial Cup. It is a moment that we have all been dreaming of for a very long time.”

The 2022 Memorial Cup presented by Kia will take place from June 3-12 and will feature the playoff champion from the Western Hockey League, Ontario Hockey League, and Quebec Major Junior Hockey League, in addition to the chosen QMJHL host club.

Completed bids will be submitted to the Canadian Hockey League and the appointed selection committee by August 23rd, 2021. The committee will then announce the winning bid and host of the 2022 Memorial Cup presented by Kia on September 6th, 2021.

“I still remember that feeling of raising the cup over my head,” added Sea Dogs alumnus and captain of the 2011 Memorial Cup Champions, Mike Thomas. “To have the Memorial Cup in my home province of New Brunswick, right here in Saint John would mean so much to the players, their families and the fans. I can attest, it would provide memories for a lifetime.”

TD Station has been the premiere events space in southern New Brunswick since its opening in 1993. The arena has played host to national and international events including the 2019 CHL Canada/Russia Series, 2018 World Under-17 Hockey Challenge and 2014 Women’s World Curling Championships.

For more information on the Memorial Cup presented by Kia, visit chlmemorialcup.ca.