MENU
In response to the suspension of the season by the QMJHL, the Sea Dogs office will be closed until further notice. Please see the below announcement re: existing tickets and flex vouchers. Please hold on to any unused tickets. For questions/information please contact info@saintjohnseadogs.com We thank you for your patience and understanding as we continue to work through this.
June 3, 2020 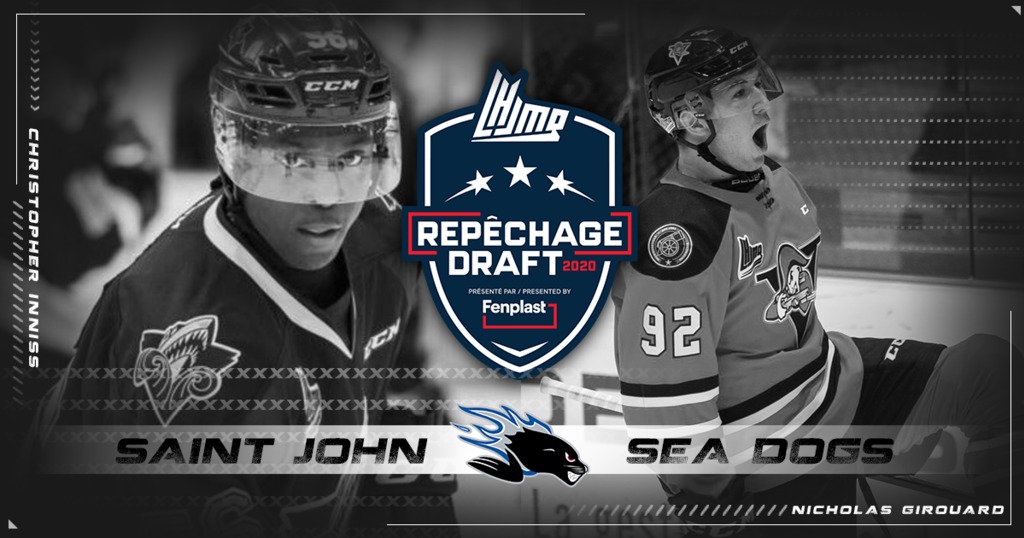 The Sea Dogs acquired 19-year-old defensive defenceman Christopher Inniss from the Rimouski Oceanic. Last season, Inniss finished first in hits (137) and third in plus/minus (+29) for all defencemen aged eighteen and under. Inniss has 30 points and is +53 in 169 QMJHL games, he also has 15 games of playoff experience. The native of Longueuil, Quebec was drafted 10th overall in 2017 when Saint John hosted the QMJHL Entry Draft.

“Chris is a player that we identified years ago as a fit for us,” said Sea Dogs President & GM, Trevor Georgie. “He is a right-shot defenceman who knows his role and does it very effectively. He competes furiously, defends well, and plays a physical game. He is great on the penalty kill, will help us defend leads, and will compliment our blue-line as a shutdown defenceman.”

In return, the Sea Dogs sent back to the Oceanic a 2022 1st Round Selection and a 2022 3rd Selection that they had previously acquired from the Oceanic in the December 2019 Nicolas Guay trade that saw overager Jeffrey Durocher come to Saint John.

The Sea Dogs added another veteran, acquiring 6’2″, 19-year-old winger Nicholas Girouard from the Drummondville Voltigeurs. Girouard finished the 2019-2020 season with 16 goals and 23 assists in 61 games. In return for the big winger, the Sea Dogs sent two 2021 2nd Round Selections to the Voltigeurs. Similarly to Inniss, Girouard was drafted in Saint John during the 2017 Entry Draft, when he was selected 30th overall by Drummondville.

“Nic was almost a Sea Dog a few seasons ago as part of the Joe Veleno trade. It took some time but we’re happy that we’re going to finally see him in blue and white,” added Georgie. “He has size, skill, and can move up and down the lineup. We think that he is just scratching the surface in terms of his upside. We expect both Chris and Nic to be two-year guys, playing for us at 19 and finishing their junior careers as Sea Dogs at 20. Both have been part of teams that were poised to win it all (Drummondville in 2018 and Rimouski in 2020) and had their seasons cut short. They’re coming to Saint John very hungry, like the rest of our group.”

Saint John acquires a conditional 7th Round Selection in 2021 from Chicoutimi for forward Alexandre O’Neill. O’Neill, a 5th round pick in 2018 played six games for the Sea Dogs, registering one goal.

The team also acquired a pair of 2020 picks; a 2nd Round Selection (38th overall) and a 4th Round Selection (59th overall) from the Halifax Mooseheads for forward Robert Orr. Orr was drafted in the 5th Round of the 2019 Draft and has not yet played a game in the QMJHL.

“Fortunately, we have a lot of depth up front and both Alex and Robert wanted a chance to play,” said Georgie. “They can both play in the QMJHL and we didn’t want to hold them back. These moves are part of important asset management, and gave us the opportunity to replenish some picks from previous trades.”

The pre-draft Trade Period ends at 1PM today. Tune-in Friday on the QMJHL’s YouTube channel for the first round of the QMJHL Entry Draft at 7:30PM.