MENU
In response to the suspension of the season by the QMJHL, the Sea Dogs office will be closed until further notice. Please see the below announcement re: existing tickets and flex vouchers. Please hold on to any unused tickets. For questions/information please contact info@saintjohnseadogs.com We thank you for your patience and understanding as we continue to work through this.
September 20, 2019 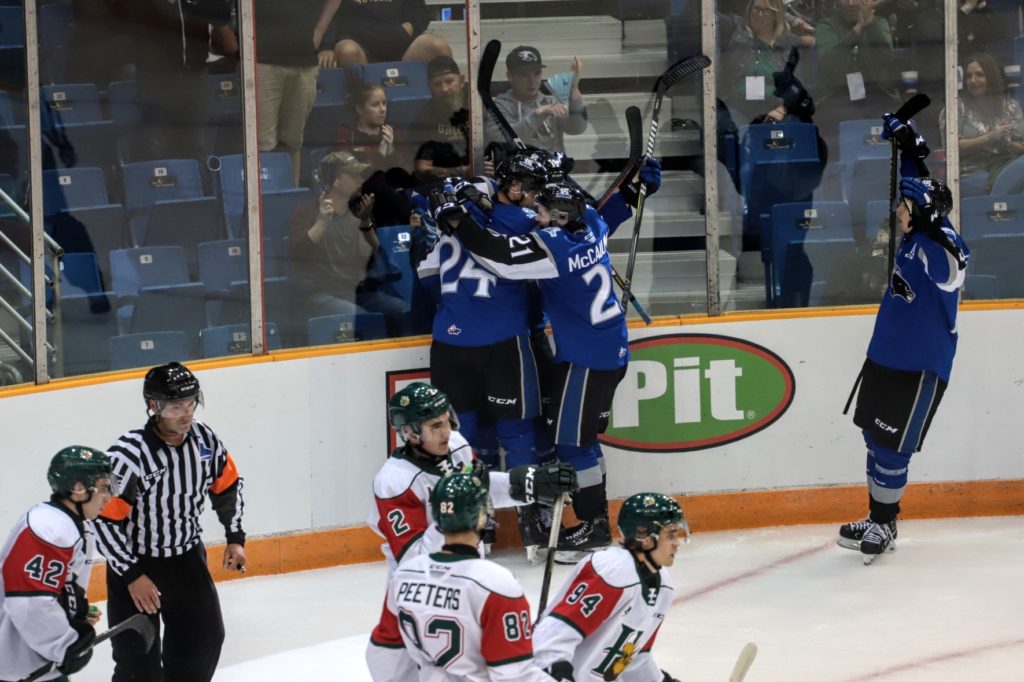 The Saint John Sea Dogs kicked off the 2019-20 regular season and their 15th Anniversary with a 4-3 win over the Halifax Mooseheads on Friday night, in the first ever game on TD Station ice. Zachary Bouthillier was impressive in net saving 40 of the 43 shots he faced.

The first period began with a lot of back and forth, with both teams getting offensive chances.  Nicholas Deakin-Poot broke the 0-0 tie at 13:10 in the first, scoring the Sea Dogs first goal of the season.

The lead did not last for long as Marcel Barinka scored on a passing play from Lavoie at 10:25. After the goal the Mooseheads began to apply more pressure in the Sea Dogs zone, but Bouthillier stood tall and the game remained tied.

The Mooseheads began the third period with a powerplay after James White was given an elbowing penalty with .6 remaining in the first, but they could not capitalize with the extra man.

Ben Badalamenti gave the Sea Dogs the lead with his first goal in the QMJHL, a tap-in from Brady Burns and Maxim Cajkovic at 10:47.  William Villeneuve quickly increased Saint John’s lead to two, scoring top shelf from the point at 9:26.

The attention turned to the goalies for the rest of the second, with both netminders standing strong.  The last few minutes of the period included an exciting sequence with back to back breakaways.  Neither shooter scored, as Bouthillier turned away Maxim Trepanier’s attempt before Alexis Gravel did the same to Deakin-Poot.

Shots at the end of the second were 30-22 Halifax.

The Mooseheads applied more pressure at the start of the third, with Lavoie scoring at 15:43 after a scramble in front of the Sea Dogs net making the score 3-2.

Fredericton’s Dawson Stairs increased the lead soon after with his first QMJHL goal, a quick shot off a pass from fellow Fredericton native Josh Lawrence at 12:51.

Halifax responded quickly, Senna Peeters blasting one past Bouthillier at 12:14 and bringing the score within one again.

Halifax pulled their goalie in the final minutes of the game but were unable to score with the extra man.

Saint John returns to action Saturday night to take on the Moncton Wildcats at home at 7PM.