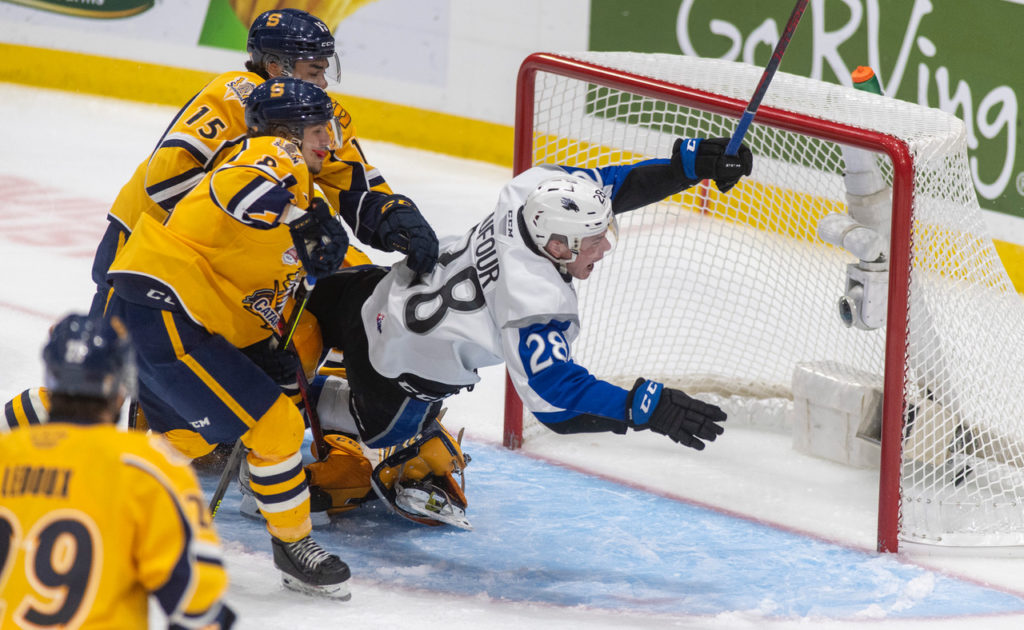 The Saint John Sea Dogs clinched their spot in the 2022 Memorial Cup presented by Kia with a 5-3 comeback win against the Shawinigan Cataractes. After going down 3-0 in the first, five unanswered goals from the Sea Dogs, including an incredible four goals from William Dufour and one from Jérémie Poirier, secured the win on Saturday night.

Nikolas Hurtubise got the start for Saint John, making huge stops and saving 26 of 29 Cataractes shots. Antoine Coulombe was between the pipes for Shawinigan, saving 31 of the 36 Sea Dogs shots. 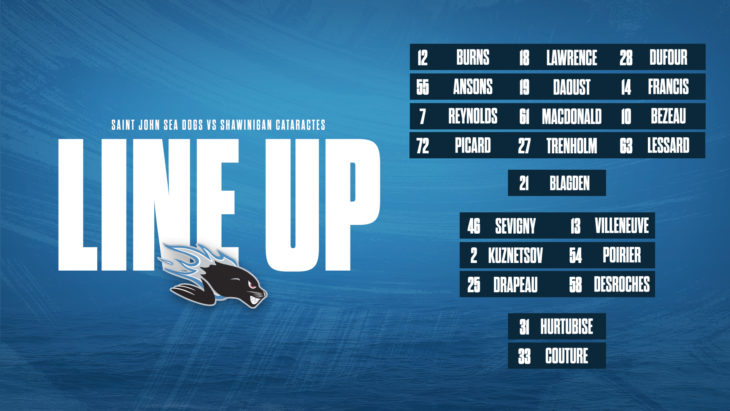 49 seconds after puck drop, Loris Rafanomezantsoa scored on the first shot of the night, getting Shawinigan the lead.

The Sea Dogs built up some momentum and took control of the offence, outshooting the Cataractes 10-4 in the first half of the period. Saves from Antoine Coulombe kept the puck out of the net and the Sea Dogs off the board.

Nikolas Hurtubise made a huge stop against Mavrik Bourque, but play stayed in the Sea Dogs zone and a shot from the blue line soon after made it’s way past Hurtubise to make it 2-0 Shawinigan.

Shawinigan’s William Veillette made it 3-0 with 43 seconds remaining.

With 33 seconds to go in the period, Ryan Francis was sent off for roughing and the Sea Dogs began the second frame on the penalty kill.

Shots were 15-10 Shawinigan after the first.

The Sea Dogs regrouped in the intermission and hit the ice firing on all cylinders for the second period.

At 2:02, William Dufour ripped a one timer from the top of the faceoff circle past Antoine Coulombe to get the Sea Dogs on the board. 21 seconds later, he scored his second of the night, waiting out Coulombe and picking the top corner.

Six minutes later, Dufour completed the natural hat trick, crashing the net and picking up his own rebound to tie the game up at three each.

At 13:08, Olivier Nadeau was sent off on a hooking call and the Sea Dogs were able to capitalise on the opportunity. Jérémie Poirier send a bomb down the slot to beat the netminder and take the 4-3 lead.

Some shoving behind the Sea Dogs net sent William Villeneuve and Pierrick Dubé off for roughing, while Mavrik Bourque joined them on a slashing call at 19:54.

Shots after the second period were 31-20 Saint John.

The Cataractes killed off the penalty, but three seconds later, William Dufour found the back of the net for the fourth time of the night, making it a 5-3 game early in the third period.

Shawinigan pulled their netminder with less than three minutes remaining in the game, but the Sea Dogs kept their two goal lead to take the win.

There are no games tomorrow, but Shawinigan and Hamilton will return to the ice on Monday for the semi final to decide who will take on the Sea Dogs on Wednesday.