MENU
In response to the suspension of the season by the QMJHL, the Sea Dogs office will be closed until further notice. Please see the below announcement re: existing tickets and flex vouchers. Please hold on to any unused tickets. For questions/information please contact info@saintjohnseadogs.com We thank you for your patience and understanding as we continue to work through this.
February 1, 2020 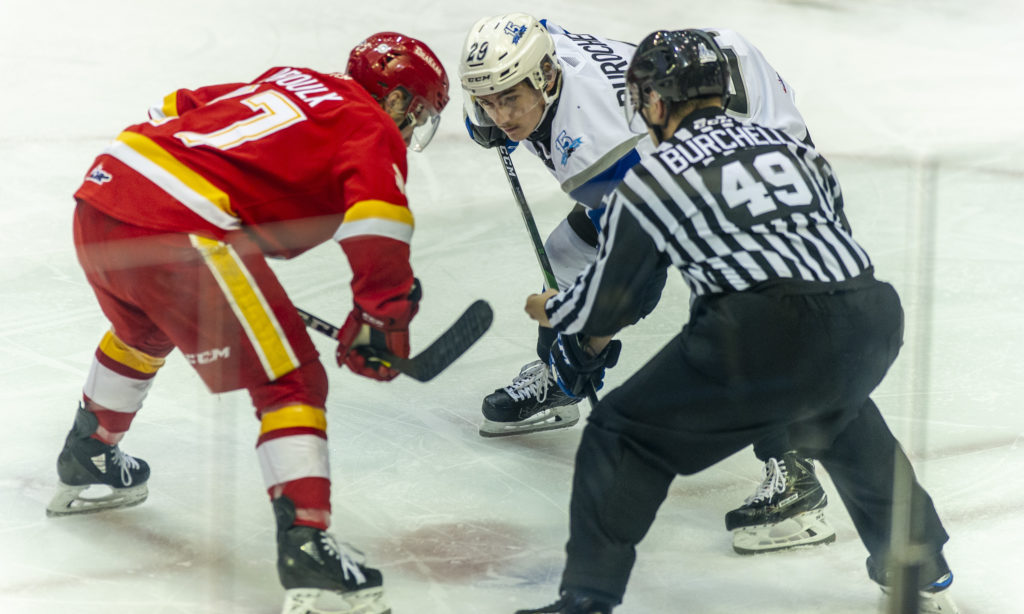 A stellar performance from goaltender Noah Patenaude and overtime goal from the teams leading scorer Brady Burns propelled the Saint John Sea Dogs (24-26-1-0) past the Baie-Comeau Drakkar (19-20-7-2) in the last game of their Quebec road trip on Saturday evening.  Goals from Maxim Cajkovic, Charlie DesRoches, and Julian Vander Voet in regulation lead to the 4-3 overtime victory.

Patenaude got the start in net and put up a .943 save percentage, stopping 50 of the 53 shots he faced.

Maxim Cajkovic opened the scoring early, picking up a pass from William Villeneuve and sending the puck into the open side of the net 1:20 into the game.

The Sea Dogs penalty kill came out when William Villeneuve was sent off for holding at 3:32. Baie-Comeau’s Brandon Frattaroli tied the game up five seconds after the power play ended.

Nathan Légaré gave his team the lead at 11:39, cutting quickly toward the net and sliding the puck past Patenaude.

The Sea Dogs successfully killed another penalty after Brendan Sibley was sent off for interference at 15:48.

At 19:21, Jeffrey Durocher and Jordan Brière were sent to the box for roughing, sending the play to four-on-four.  Charlie DesRoches capitalized on the extra room on the ice, scoring eight seconds later and tying the game at two.

Shots after the first were 16-11 for Baie-Comeau.

The second period was dominated by a great performance by Noah Patenaude, stopping all 19 shots he faced in the period and keeping the game tied at two going into the final frame.

The Sea Dogs got a power play opportunity when Raivis Kristians Ansons was sent off for interference at 1:49.

The Drakkar had two power plays in the period after a slashing penalty to Charlie DesRoches at 10:44 and a tripping call at 15:34 against William Villeneuve.

Shots going into the final period were 35-18 for the Drakkar.

A wrist shot by Julian Vander Voet from the faceoff dot found its way past the Drakkar goaltender and the Sea Dogs took the lead for the second time of the game at 2:40.

The game was tied back up quickly by Valentin Demchenko at 4:37.

Brendan Sibley and Nathan Légaré were sent off at 6:09 for roughing.

Sixty minutes were not enough to decide the winner and the Sea Dogs went to overtime for the second night in a row.

Brady Burns scored the overtime winner, going into the offensive zone alone and deking past all three of the Drakkar players to put the puck into the back of the net.

The Sea Dogs will return to the ice to take on the Halifax Mooseheads on Friday February 7 at TD Station. Juno Award Winning hip-hop artist Classified will be performing during the intermissions of the game. Puck drop is at 7PM. Tickets are available at the TD Station Box office and online.